Adelaide Oval's new $42 million hotel has been offered up as a potential coronavirus quarantine centre for India's touring party next season in a left-field idea put forward to Cricket Australia to facilitate the staging of the blockbuster Test series.

While the fate of the 2020-21 international season effectively rides on the opening of Australia's borders or a government exemption to travel restrictions for touring sides, cricket authorities are considering ways they can manage health and safety measures once the teams are here.

Could Adelaide Oval’s new hotel be used for India’s cricketers to quarantine this summer?Credit:Getty

Kangaroo Island and Rottnest Island have also been mooted as potential self-isolation sites for a visiting team.

South Australian cricket chief Keith Bradshaw has confirmed to the Herald and The Age he has reached out to Cricket Australia boss Kevin Roberts to offer Adelaide Oval's new hotel for use by Virat Kohli's side if they are allowed into the country.

Under current measures, visitors must isolate for 14 days, which is problematic for elite athletes who need to train in order to maintain conditioning and form for competition.

An attraction of the Adelaide Oval hotel as a quarantine centre is it would enable the world No.1 Test nation to train in first-class cricket facilities at the adjacent nets as well and give them access to suitable dining and nutrition options.

A warm-up match could also be staged at the venue, which would need to be closed off to the public during the isolation period, once the mandatory two weeks have been completed. 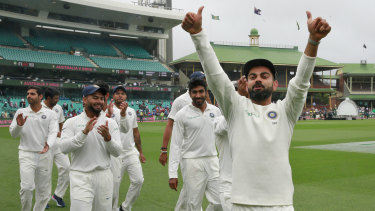 Any plan would need to be signed off by government and health authorities as well as the Board of Control for Cricket in India.

Cricket officials will likely keep a close eye on how the NRL manages the quarantine process for the New Zealand Warriors.

Construction of the boutique 138-room Oval Hotel is expected to be completed later this year with an opening in September, according to the hotel's website.

The hotel is being built and managed by the Adelaide Oval Stadium Management Authority, in which the South Australian Cricket Association has a 50 per cent stake.

South Australia was the first cricket state to feel the impact of the coronavirus pandemic last month when it was forced to cut 23 staff and freeze hiring as part of cost-saving measures after the postponement of the AFL season meant there was no income from games at the Adelaide Oval.

Unlike Australia's major football codes, cricket was fortunate to have completed almost its full international schedule before the shutdown, but stands to be impacted severely in the coming season.

There are already significant doubts about whether the 16-nation men's Twenty20 World Cup, due to start on October 18, will go ahead.

The cancellation of the Tests against India could cost CA potentially up to $300 million in lost TV revenue. Summers involving India and England are the two most lucrative in the cycle for Jolimont.

CA is working through numbers as they seek a $200 million line of credit from the banks. The governing body is tight-lipped about the range of scenarios being explored for next summer.

The economic uncertainty from the health crisis resulted in CA pushing back the announcement of its central contracts as it considers reconfiguring its contracting system.