Passionate Everton fan Martin Dwyer jokes that social distancing from Liverpool supporters over the past three months has been easy.

On Saturday, his aim is being in close proximity to an Investec Derby winner when he hopes Pyledriver can deliver his second win in the most prestigious Flat race of the season, giving the blue half of Merseyside a reason to cheer after having to watch their deadly rivals revelling in their first Premier League success.

Some of the Goodison Park faithful were clearly watching when Pyledriver burst into the Derby picture with victory in the King Edward VII Stakes at Royal Ascot last month.

Winning his eighth race at the royal meeting meant a lot to Dwyer, who turned 45 last Sunday, but arguably not as much as the congratulatory message he received via the official Everton Twitter account.

The jockey, who was born in the Liverpool suburb of Fazakerley, said: ‘I did say it was better than getting a message from the Queen! In these strange times, we were the first sport to go back and so many people were watching Royal Ascot, including a few people from the football club.

‘I love Everton. They are my boyhood club. I go back there as much as possible and I know a few people there. It’s difficult because of work but I go to as many games as I can with my son, Joseph.

‘One of my closest mates is Danny Webb, who works for Everton’s academy. I’ve met Duncan Ferguson a few times and knew Alan Stubbs when he was at the club, and Leon Osman. I am also friends with Kevin Sheedy (an Everton star in the 1980s). 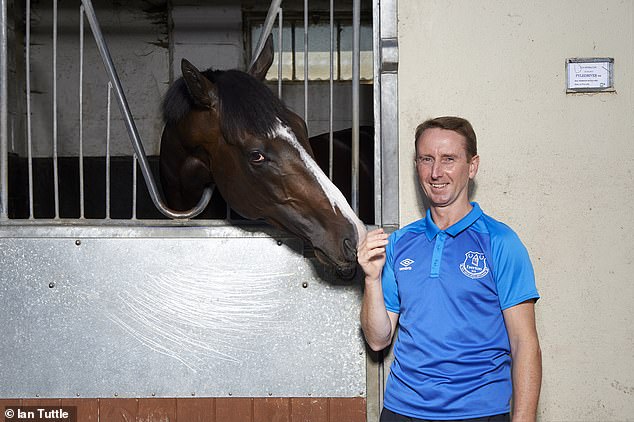 Winning his eighth race at the royal meeting meant a lot to Dwyer, who turned 45 last Sunday

‘I like going to the training ground, seeing how it works behind the scenes. I have done that quite a few times.

‘I have been getting it non-stop from so many of my Red friends. We are always giving each other grief. The night they won the league, my phone was red hot. I had to turn it off and go to bed!’

Whether on the racecourse or the football pitch, sporting success can be about grabbing an opportunity.

Dwyer may be only 16 short of 1,500 British winners but big race opportunities have been scarce in recent years. He has ridden Group One race winners in North America, Hong Kong, Dubai and Italy but Pyledriver will be only his fourth ride in the Classic, which he won in 2006 on Sir Percy.

Dwyer, who also won the 2003 Oaks on Andrew Balding-trained Casual Look, said: ‘It has been frustrating and disappointing but I am also a realist and it is the way sport goes. There is a winning mentality, and if you are having lots of winners, the rides come easier. When you are not having winners, rides dry up. 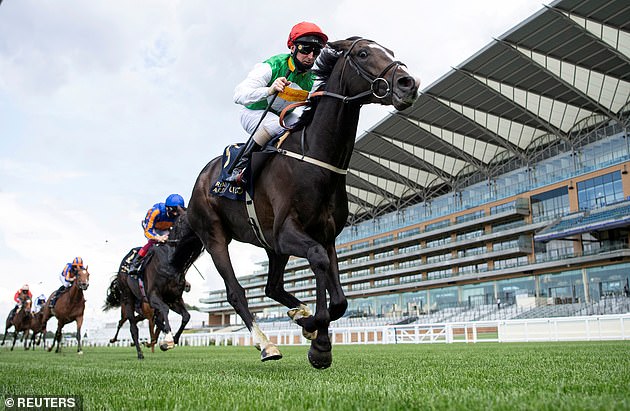 ‘It is the same if a footballer is not scoring goals. They find themselves on the bench. But it is a vicious circle for a jockey — if you have not got the horses, you can’t win as much.’

Sir Percy and Pyledriver have contrasting profiles going into the Derby. Sir Percy had won the Group One Dewhurst Stakes aged two and was second behind George Washington in the 2,000 Guineas before his short-head defeat of Dragon Dancer at Epsom.

Pyledriver’s first-season form was good, without being outstanding, but he has blossomed with age.

Dwyer added: ‘With Sir Percy, through the winter we were hoping we had a Classic horse on our hands. He ran a great race in the 2,000 Guineas and when he crossed the line he still had plenty of petrol left in the tank, so we thought the step up in distance to a mile-and-a-half would suit him.

‘William Muir (trainer) was dreaming of big things for Pyledriver last year when he only ran a few times and was so weak. I rode him in the Royal Lodge Stakes at Newmarket and he was like Bambi on ice! He was all legs. But when I worked him earlier this year, I could feel he had progressed a lot.

‘He ran a blinder on his comeback at Kempton and then, at Royal Ascot, he felt even better. He is just finding his strength and the way he won, he clearly is good enough to run in a Derby.

‘A lot of horses quicken once and you have to use that wisely but he quickened twice. That is what good horses do.’

When Dwyer won the Derby, victory was extra special because his father, Martin Snr, was playing a big part in his career, living with his son’s family and driving him to races.

It was his father’s passion for racing that fostered Dwyer’s interest in the sport and he who wrote to the trainer Ian Balding asking if he would take his son as an apprentice jockey.

Dwyer recalled: ‘I don’t think he could believe it where we had come from and the journey we had been on.’

Dwyer Snr almost got in on the act. When the then-Daily Mail racing correspondent Colin Mackenzie rang the next day, it was Martin Snr who answered the phone — and his big-race debrief was only rumbled when he admitted he had been so nervous before the race he’d had to have ‘a couple of pints and a whiskey’.

Like his son, Dwyer Snr was a devoted Evertonian. When he passed away, he was buried in the Anfield cemetery.

‘Don’t worry, it’s a massive cemetery and he is buried at the Everton end,’ the jockey said. ‘He can look out over Goodison!’

He might be casting an eye south to Epsom on Saturday.