India captain Virat Kohli has hit back at his side’s critics following the dramatic Test series win over Australia. India chased down Australia’s target of 328 deep into day five at the Gabba, winning with just 18 balls of the match remaining. Rishabh Pant was the hero with the bat, striking an unbeaten 89 to lead his side home by three wickets.

Victory means India win the four-match series 2-1, bouncing back from the first Test defeat where they were bowled out for just 36.

Kohli returned to India after the first match at Adelaide for the birth of his first child.

But the 32-year-old took to Twitter shortly after Tuesday’s win to congratulate his team-mates and respond to critics.

Kohli tweeted: “WHAT A WIN!!! Yessssss. To everyone who doubted us after Adelaide, stand up and take notice.

“Exemplary performance but the grit and determination was the standout for us the whole way.

“Well done to all the boys and the management. Enjoy this historic feat lads. Cheers.”

Ajinkya Rahane was the stand-in captain for India for the remainder of the series.

And the batsman was almost lost for words at the post-match ceremony in Brisbane.

“It really means a lot to us,” Rahane said.

“I don’t know how to describe this victory but I’m really proud of all the boys who have shown character, attitude, especially after the Adelaide Test match.

“We decided we were going to fight really hard.

“We know Australia in Australia are a very dangerous team and we just wanted to give our best, not to think about results.

“As I said I don’t know how to describe this victory, I’m just proud of every single individual. 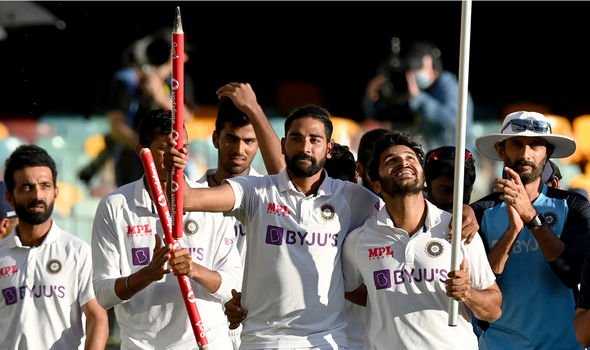 “As I said, after the Adelaide Test match we didn’t discuss anything, about what happened in Adelaide.

“We just wanted to play our game and play with good attitude, play with good character on the field and as I said we were not thinking about the result.

“We just wanted to express ourselves as a team and it was all about team effort.”