Usman Khawaja would like a word with you. Not a harsh word, nor an overbearing one, but a word nonetheless.

He’d like to talk to you about how and why Australian cricket has seen so few non-white players at the very top of the game. Why, too, this has remained the case for decades after the cultural mix of the nation became far more diverse than the names of most players picked for the men’s and women’s Test teams.

He’d like to talk about his own experiences, where he belted the proverbial door down to gain opportunities for New South Wales and then Australia without feeling like he was completely part of the teams he was chosen for. And about how, after moving to Queensland, he made a choice to do things his own, authentic way, and in turn became one of the most accomplished and respected captains in domestic ranks.

Usman Khawaja just before his Test debut, when he was still trying to fit into a predominantly white Australian cricket culture.Credit:Quentin Jones

Most of all, he’d like the conversation to be passed on, through the ranks of Cricket Australia, state associations and clubs, so that the advancement of the women’s game can be replicated in a multicultural sense. Khawaja, you see, doesn’t want to be the only south Asian, Muslim-Australian Test cricketer you can name off the top of your head. Nor does he want to be the only voice pushing for greater diversity in playing, coaching and leadership positions.

“One of the big things is people around the game, coaches, staff at CA. They’ve been really good at bringing forward gender equality, but I think the same thing needs to be done for multiculturalism,” Khawaja tells The Age and The Sydney Morning Herald. “That goes all the way up to the top, to the board.

“Is there someone who’s reflecting the general population of Australia, or is it just older cricketers who are predominantly white, Anglo-Saxon players? That’s just the crux of it, that’s what it’s been. Cricket’s a very white sport and has been for a long time in Australia. So unless things start changing from the top, it’s very hard to funnel that down, because that’s where all the decisions are made.“

When Khawaja made his Test debut at the SCG in January 2011, it was seen as a breakthrough moment for the game, destined to usher through many more south Asian cricketers, in particular, in his wake. But the reality is that he remains the only such player to make the Test team, and then stay in it for any length of time, over the past decade. 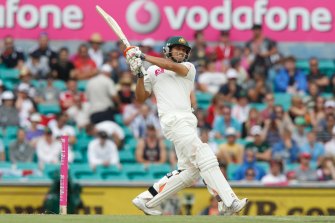 Khawaja in action on debut at the SCG.Credit:Quentin Jones

“There are definitely more players now of subcontinental or multicultural heritage in the system than when I started,” Khawaja says. “There was pretty much no one then. You’ve got Gurinder Sandhu, Jason Sangha, Ollie Davies has got a different background, and predominantly coming from big multicultural communities in Sydney and Melbourne. So there is a little bit. But in the Australian team you still haven’t seen it.

“The fact of the matter was that I debuted for NSW on the back of being the highest grade run scorer. I scored five hundreds in a grade season, back-to-back double centuries in second XI cricket. Not trying to sound arrogant, but I knocked the house down and if I didn’t do that, I’m not sure I’d have got as much of an opportunity as someone else who was in better books or had better relationships with people.

“I’ve said numerous times that people told me ‘you’re not going to make it, you’re not going to play for Australia, it’s a white man’s game, they won’t select you’. There could have been plenty of times where I thought ‘nah this is too hard, it’s not going to happen, I’m not getting opportunities,’ but fortunately I’m very stubborn and I have quite thick skin and I just kept pushing, pushing because I love the game and I want to do well.”

Principally, in an echo of what has been seen at club level, Khawaja found it hard to fit into the drinking culture of Australian cricket, particularly in his early days with the national team. It is in pubs, bars and hotels that so much relationship-building has traditionally gone on in the men’s game, and as a teetotal Muslim, Khawaja is happy to admit it was at times a struggle to connect outside of playing and training.

“For a while there I tried to dress like everyone else too. Alcohol was the one thing that stood out, but for a lot of other things, I was trying to assimilate and fit in because I felt like I was left out in that department.

“I didn’t go out and drink with the boys and for a long time I felt like I was missing out on some really good conversations when they were out drinking and partying and at pubs. I’d miss out on all these stories and thought ‘oh, am I missing out on opportunities because I’m not one of the lads’ and these are the sorts of things that could have put me aside. Those are the things we’re fighting now to make sure those aren’t factors in trying to get the best players up to go and play for the national side.”

After he moved to Queensland in 2012, away from family and his Sydney friendship network, Khawaja found more freedom to figure out who he was and how he wanted to be as a cricketer and a person. Australian teammates noticed this when he was recalled in 2015, in terms of his dress sense, his attitudes. 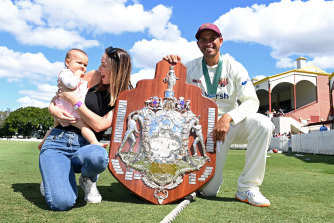 “Look I just stopped giving a crap, that’s the honest truth,” he says. “I came back into the Aussie team and everyone was like ‘what are you doing, what are you wearing’ and I went ‘what, this is me’. I used to cop it from all the guys because people, especially in cricket, don’t like change.

“I was wearing high socks and doing all this other stuff like what basketballers do and people were wondering why, whereas now it’s just the norm. I was being myself and I’m really proud when I see other cricketers come into the game and be themselves, doing their own thing, showing their personalities.”

Then there was his willingness to do things such as “dabbing” to celebrate a 50 during the SCG Test in January 2017. “I dabbed in a Test match and got absolutely berated by people,” he says, “and I just asked the simple question ‘why can I not dab when I score a 50 in a Test match, why is that not allowed?’ And it was ‘oh, because you just can’t do it’ and I said ‘so you can raise the bat, you can raise your thumb, you can take off your helmet, but I’m not allowed to dab’.

“So it was … being myself and having a bit of fun, and breaking down some old traditions. I love the game and respect it very much, but I’m always questioning the game in terms of ‘why do we do this, why do we do that, that doesn’t make sense, can you give me an actual reason?’ I’m not doing it in a way where I’m disrespectful, I’m just trying to be myself.”

That example was taken out of the Australian side when Khawaja was dropped during the 2019 Ashes. Since then, he’s become a father, and led Queensland to the Sheffield Shield – showing particular knack for captaining wrist spinner Mitch Swepson. At the same time, he is building the Usman Khawaja Foundation, geared at aiding young cricketers from non-white backgrounds to find a footing in the game. Ultimately, he wants to see many more faces like his own at all levels.

“I don’t do it on purpose, but all my sporting heroes have been coloured or black,” he says. “I just gravitate towards them, one because they’re really good at what they do, and two because I feel like they have similar traits, they listen to similar music, they dress similar, they’re closer to what I look like. It’s just an inherent thing.

“That’s why I’m big on trying to get more representation, so people start seeing it and saying ‘ah, yeah, these guys are doing well in what their prospective jobs are, and I can do that too’. But if you don’t see it and it doesn’t happen, then it’s very hard to try to achieve it.”

Happily, Khawaja believes that he is getting a better hearing about such things than at any time previously. “Nick Hockley has actually been great – I’ve had some really good conversations recently that I’ve never, ever had before with anyone high up in CA,” Khawaja says. “We’ve always had a vision, but when the time comes it’s always been in the too-hard basket because it is actually very hard.

“The fact is it’s not going to take one or two years, it’s going to take a very long time. It might take 10 to 15 years to see the fruits, once you actually start putting things into place.”

Khawaja, then, would like a word. He hopes, one conversation at a time, to make a difference.