Paris: Richie Porte will go full circle at the Tour de France starting on Saturday, intent on helping teammate Geraint Thomas to cycling’s biggest prize despite his own blistering form.

The 36-year-old will line-up at the grand depart in Brest on the back of victory at the Criterium du Dauphine, the champion of which has often gone on to win the yellow jersey.

Richie Porte has found a rich vein of form in the twilight of his career. Credit:Keystone

That result put his collection of one-week stage-race victories in the same stratosphere as all-time great Eddy Merckx and followed a career-best third place at the Tour last season with former team Trek-Segafredo.

Porte, who is back in the fold at Ineos Grenadiers – the squad that was unseated at the 2020 Tour but is more accustomed to winning the race than not – you could say, has never been in a better position to vie for the title, despite his age.

The Tasmanian left an incarnation of his current team, with which he rose to notoriety at the Tour as four-time champion Chris Froome’s chief lieutenant, at the end of 2015 and his primary occupation at the race has since been that of a title contender.

Porte has done the same amount of work to be ready this season. But with plans to retire at the end of next year, he reckons that, while he can now more than ever take it, the additional stress that comes with being a leader versus the last or second-last man to help someone else to the line, is no longer worth it.

“I don’t want that pressure any more,” Porte told The Age and Sydney Morning Herald.

“I don’t think I’m a bad person but when I get stressed, I am quite prickly, and I am stressed 100 per cent of the time [as a Tour contender]. Everything plays on your mind. You’re going through those scenarios of what if and then in a sport like cycling you can’t control anything really. I’ll be a better teammate, a better person if I don’t have all that stress and pressure on me.”

Porte and Thomas have followed a similar race program this season and had frank conversations about leadership, supporting each other to respective wins in the lead-up to the Tour. Porte said the Welshman wanted to claim the Tour de Romandie in May for his confidence, which he did, and in return Thomas worked for Porte at the Dauphine.

“It’s also clever of ‘G’ [Thomas] because now I’ve won this race I’m 100 per cent committed to helping him win in July, and I think he can. That’s the difference, having the belief in your leader that they can win it,” he said of the 2018 Tour victor.

“I was never part of that boys’ club, and that’s what it is.”

Porte’s mindset is different to the champions, from Froome, to Merckx and Australia’s only Tour winner, Cadel Evans, who his name is now etched alongside in history books.

“If I stepped back and looked at the races I’ve won through my career, if it was someone else, I’d be like, other than I haven’t won a stage of a grand tour, which is something when everyone is so focused on those grand tours, but when you’re in cycling and you’ve won the races that I have, I’d say that’s a hitter,” Porte said. “But I don’t really look at myself as that.

“I do have the [CV] of a seriously good bike rider, but I’ve always underestimated myself. I don’t have that confidence in myself, I guess. I’ve always been the little guy.”

Porte is not a born winner, he’s a born fighter. Nothing from his amateur days to five seasons in the ring as a Tour contender, and selection for the upcoming Tokyo Olympics has come easily, which has made his recent results especially satisfying. 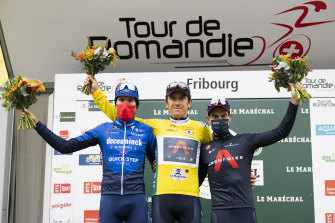 Richie Porte, right, with teammate Geraint Thomas, centre, who he will support in a Tour de France title bid this year. Credit:Keystone

“I never came through the AIS [Australian Institute of Sport] program; there was no easy pathway for me into it,” he said.

“Yes, I’ve ridden for the best teams now, but I didn’t ever have the support of the AIS or the TIS [Tasmanian Institute of Sport] and still, I’m not even a part of the TIS now.

“I was never part of that boys’ club, and that’s what it is.

“I would have loved to have been a part of it. They had no interest in me. I don’t know what I did but obviously I upset someone. Maybe it’s being from Tassie!”

Porte is your quintessential Australian, but he’s never competed for the only Australian-registered team in cycling’s top tier, which many academy staff and products graduated to.

The British set-up he’s returned to has always felt like home, even though while it supported his decision to leave in 2015, the squad, in competition, held no sentiment towards him thereafter.

Froome, the Kenyan-born Briton whose impeccably well-mannered demeanour belies his killer instinct, remains Porte’s rival with his own transfer to the Israel Start-Up Nation team.

In the aftermath of the Dauphine, Porte recalled the 2017 edition, which he had all but won until Froome allegedly instigated an ambush that he believes needlessly cost him the title.

Porte describes Froome off the bike as a good friend and the godfather of his son, but on the bike, they operate differently.

“Maybe if I had his mindset, I would have won more bike races,” Porte said.

“That’s why he’s so good. It’s foot on the throat.

“Maybe it’s our upbringing. I came from a privileged upbringing in Australia where, it’s totally different to growing up in Kenya. 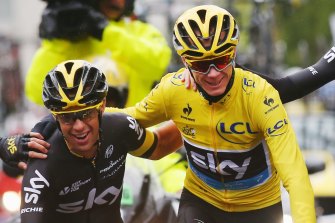 “As a bike rider I admire the guy, how hard mentally he is and what he’s been through. But at the same time, if someone had dedicated themselves to me for so many years, I wouldn’t go out of my way to make sure they didn’t win bike races, or the Dauphine in 2017.

“I’ve had that conversation with him face to face, he knows my feelings.”

Froome, by contrast, credits an impenetrable mental fortitude above all else to his success.

“I’ve got such a single-minded focus when I’m in that race for GC [general classification] I don’t pay attention to the noise around me,” Froome told The Age and Sydney Morning Herald.

“When I’m in that race mode it doesn’t matter what it is, basically the result takes precedence over everything. I consider Richie to be a life-long friend that I’ve met and made through cycling, but anything that happens on the bike stays on the bike and that’s part of competition.”

Porte knows given his form that he won’t be able to do his job for Thomas every stage, then sit up and lose time as he may prefer. He was told as much in a late-night discussion with team manager David Brailsford the night of his Dauphine victory.

However, as he readies for the Tour and rides closer towards a rich sunset, Porte is having the last laugh.

“Yeah, I never won the Tour. But I’m happy with my career and how it’s panned out,” he said.