Test veteran David Warner says fellow opener Joe Burns has done nothing wrong but admits the the Queenslander's "bat-off" with Will Pucovski next week could ultimately mean Warner has a new partner at the top of the order.

Selection debate heading into next month's first Test against India has primarily focused on whether Burns, 31, retains his spot alongside Warner or surging Victorian Pucovksi, 22, is handed a maiden baggy green cap come December 17 in Adelaide.

Joe Burns has struggled in the Shield so far this season.Credit:Getty Images

Burns has the support of coach-selector Justin Langer and captain Tim Paine, as each values incumbency, despite Burns only scoring 57 runs in five innings in the Sheffield Shield this season. However, he and Warner shared in an opening stand of more than 100 on six occasions last summer, and the pair has a great bond.

Pucovski is the form batsman in the country, with back-to-back double centuries in his new role as an opener for Victoria, and Warner texted him with his congratulations when he was named in the extended 17-man squad.

To the surprise of former Test captains Ricky Ponting and Mark Taylor, selection chairman Trevor Hohns has said he will consult Warner on any call, with the latter declaring he will respond "honestly" should he be offered that opportunity.

Warner didn't offer a preference when asked by journalists on Monday but it was clear he wants stability and values a strong bond, something he already he has with Burns. 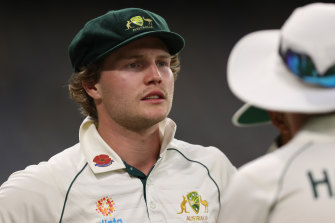 Will Pucovski has impressed as an opener Victoria so far this season.Credit:Getty Images

"To be honest, I have had over a dozen opening partners and it's never been quite stable. Obviously, when I was batting with 'Bucky' Rogers [Chris], we had a great partnership and we bonded really well together out in the middle. I think that has happened with me and Joe. We have done that over the past few years," he said.

"I have known Joe for a long time. We know each other's game very well but, at the end of the day, it's upon the selectors to pick the right person to fit that position.

"If they go the way of Will, he is obviously batting fantastic. He has been in and out of the Test squad and, obviously, removed himself in some sad times, obviously, with his mental stuff.

"He is in the right frame of mind at the moment. It probably is an opportunity for him to come into the team but, as we know, it's harder to get out of this team than it is to get in. Whoever, they go with, I will be well and truly happy with as long as that person who comes in does their job.

"At the moment, I don't think Joe did anything wrong last summer. We put on some great partnerships, averaged over 60 and that's what you want from your opening partnership."

Burns returned to the Test line-up last summer and played in all five Tests. He made 97 in the first Test against Pakistan but contributed a modest 159 runs from his next seven Test knocks.

"Obviously, we won a lot of games last year. For me, you don't break something that is actually working," Warner said.

Former captains Michael Clarke, Kim Hughes and Taylor have called for Pucovski to debut but just who gets the nod may be determined in the first of two Australia A games against India in Sydney from December 6-8. Both Pucovski and Burns have been named in a separate 19-man A squad, which includes nine players from the Test squad.

"Will is an exceptional talent and [will be] a great player for years to come, especially. He is in the right mind frame at the moment. This next A game is probably going to be the tell-all, the bat-off for that position. It is going to be interesting to see and, obviously, it's up to the selectors to pick the team at the end of the day, not me," Warner said.

Related posts:
Previous Post: Liverpool 3-0 Leicester: Jurgen Klopp admits 'the boys were on fire' after stretching unbeaten home league run
Next Post: David Warner on the fence over opening partner for first Test but will be honest if selectors ask