With the unknown of Super Seth missing from Saturday’s Randwick Guineas, it has become a case of two races becoming one.

The scratching of Caulfield Guineas winner Super Seth on Thursday means that 11 of the 13 runners left in the Guineas ran in the Hobartville Stakes a fortnight ago.

Brandenburg proves too strong for the chasers in the Hobartville Stakes two weeks agoCredit:AAP

Brandenburg sat outside the leader, Microphone, on that occasion in a slowly run 1400m, and nothing really made up ground, meaning the Hobartville effectively became two races in one.

The first four around the turn – Brandenburg, Reloaded, Microphone and Pancho – stayed in those positions, while the stayers – Shadow Hero, Castelvecchio and Warning – closed off to finish fifth, sixth and seventh in their race.

But nearly every trainer in the race is confident of their chances after the Hobartville Stakes.

“The way it was run, that is as good as it was going to get for us,” Shadow Hero’s trainer, Mark Newnham, said. “We couldn't get into the race earlier at 1400m, but I think at the mile we will be closer.

"It would be nice if there is bit more pressure in the race.”

Shadow Hero has been made the $4.60 Guineas favourite after his solid first-up effort, where he was three lengths from the winner. The fact he is unbeaten second-up, winning the Phoenix at 1600m in Brisbane as a two-year-old and the Gloaming Stakes at 1800m in the spring on his way to Spring Champion Stakes success, is another plus.

“He has taken the necessary improvement to be ready to run a strong mile and he has done it before,” Newnham said. “I’m very happy with him, and I think we are right in the race.”

Castelvecchio finished alongside Shadow Hero, both charging through the line in better late sectionals than the four horses in front of them.

“I’m not really worried about any other horse in the race,” Castelvecchio’s trainer, Richard Litt, said. “The way he is, I couldn’t be happier with the way he came through the Hobartville. 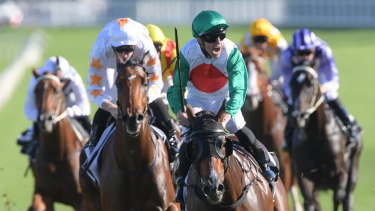 “I think he is better suited at the mile, and we can ride him closer as we did when he won the Champagne Stakes. That will be up to Kerrin [McEvoy], but I think he will be right in the finish.”

The market is favouring those that are proven winners at the mile, with Shadow Hero and Castlevecchio at $4.60 and $6, Microphone a $7 chance and Brandenburg at $8.50, even though he was best in the Hobartville.

The confidence levels around those who dominated the Hobartville Stakes are also high. John Sargent hopes Brandenburg might be able to get into a trialling position rather outside the leader if possible.

“I think he is better if he has got something to chase,” Sargent said. “We saw in the Hobartville that he is very strong, but I would like to see him get some cover if possible.

“He probably had the hardest run in the Hobartville and was still the winner, and I have no doubt that he will run out the mile strongly.”

Chris Waller was disappointed to see Reloaded, who is already group 1-placed at a mile in the JJ Atkins, draw gate 13.

“Reloaded six months ago I thought would have been clearly number one, and I am not differing away from it, but the draw makes it a bit awkward,” he said. "Everyone just forgot about him because he missed the spring.

“He has come through the run well [in the Hobartville] and he will love the mile. He has been set for the race third-up.”

Godolphin’s James Cummings has made a gear adjustment on Microphone, removing the blinkers in favour of winkers. The Sires' Produce Stakes winner changed legs in the straight when a weakening third in the Hobartville, and Cummings admitted to considering dropping back in distance rather than taking on the testing mile.

“There was a school of thought that he might be better off in a shorter race, so he was nominated for the Newmarket,” he said.

“But he’s got such a strength about him now that we’re content that this is the way to go.”

“For a colt to be a champion two-year-old one year and then to be pushed along for an autumn Guineas would be extremely satisfying.”

Related posts:
Previous Post: Origin star’s devastating diagnosis
Next Post: Pacemaker to the best of British strides out on his own Down Under