Euchen Glen bagged his second major prize of the season at Sandown with a clear-cut victory in the Gala Stakes.

A surprise winner of the Group Three Brigadier Gerard Stakes over the course and distance in May, Jim Goldie’s charge had since finished a close-up fifth in the Wolferton Stakes at Royal Ascot.

Conceding 12lb to Ed Dunlop’s promising three-year-old John Leeper, who was last seen finishing ninth in the Derby at Epsom, Euchen Glen (11-4) looked to have his work cut out under Paul Mulrennan, but ultimately got the job done in fine style.

The eight-year-old was settled at the rear of the five-strong field for much of the 10-furlong contest, with the free-going Father Of Jazz setting a furious pace and soon building up a substantial lead.

The latter was still clear rounding the home turn, but predictably faltered halfway up the straight and Euchen Glen powered down the centre of the track to win comfortably by three and a quarter lengths.

Mulrennan said: “He’s just a legend of an old horse, it doesn’t matter what trip. He ran a hell of a race at Royal Ascot.

“I was happy all the way today but I won’t lie, two and a half from home I looked up and he (Father Of Jazz) did look a long way in front.

“I was a long way back from a bad draw there otherwise he would have been a lot closer.

“The race fell in his lap today. Jim’s horses this season are flying and I seem to have struck up quite a good rapport with him. 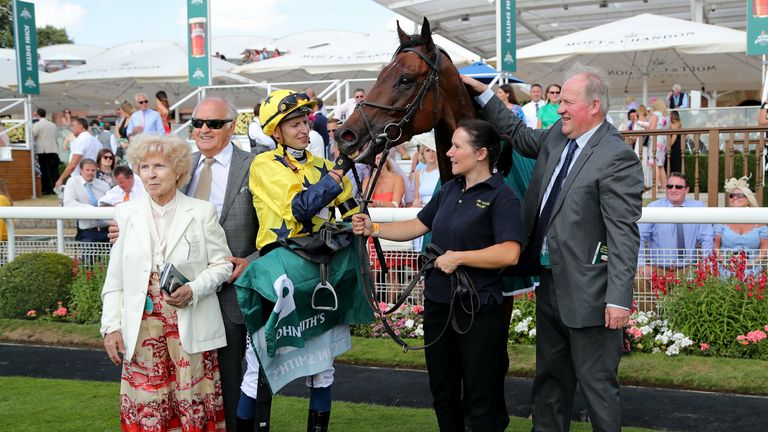 “Jim isn’t afraid to run his horses over 10 furlongs, a mile and a half, two miles and he gives you confidence when you ride for him.

“It’s something they do in Australia quite a bit, but no so much here. I’ve ridden horses here over 10 furlongs that have gone to Australia and won over five furlongs and those that win over seven here can win over two miles over there.

“Horses aren’t human, you just need to work out what suits them best and get inside their heads – Jim seems to be doing that at the minute.

“I was happy all the way today but I won’t lie, two-and-a-half from home I looked up and he did look a long way in front. But as soon as I gave him a squeeze I knew he’d pick them up.”

“On the form, I thought the only danger was John Leeper but the one who made the running did us a favour.

“He can go from the front so we debated that, but the first two or three races Jim spoke to me and said there’s more juice in the ground than people expect and the front-runners weren’t getting there. It was a last-minute decision for us to change tactics.

“With two and a half furlongs to go, I was celebrating. I know the horse and once I saw him progressing, I thought ‘this is it’.

“My father bred him and bred Nicholas T and Sir Chauvelin. He’s had a fantastic time with him and he loves bringing them on as foals.

“Jim is hoping to target the Champion Stakes, the 10 furlongs there. Paul says he likes Ascot and hopefully he’ll get some cut in the ground.

“The next target will be the 12-furlong Group Three (Queen’s Plate) at Glorious Goodwood on the Friday.”