Mitch Starc’s first-ball dismissal of Rory Burns at the Gabba was a breathtaking piece of sporting theatre, but let’s face it: it was also a fluke.

Starc doubtlessly meant to straighten the ball down the line, but not to take out leg stump. Even the Australians haven’t dared to claim that. It’s worth noting that there was no leg gully. If Burns had managed to trail a pad into the path of the ball, it is not even certain they would have sent it up for a review.

Rory Burns and the first ball of the Ashes series.Credit:Getty Images

It was the first of a catalogue of bad luck for England. Bad cricket, yes, but compounded by miserable luck, the twitches and tics of fate that help to shape more sporting contests than the combatants ever dare to admit. Luck is its own a pathology. Australian captain Pat Cummins was gracious enough to acknowledge his team’s good fortune at match’s end.

There was the toss. Had it fallen the other way, Australia would have been batting first. There was the happenstance of the rain and when it arrived. The no-ball wicket of David Warner.

The balls that beat the bat. The catches that didn’t go to hand for England and did for Australia. The sitter that poor old Burns dropped, remembering that Australia took all 18 catches that came their way. The missed run-outs.

England captain Joe Root’s lament was that England did not consummate the chances they made. But they did make chances. When they had Australia five down and less than 50 in front, and later when England were two down and only 50 behind, possibilities opened up. 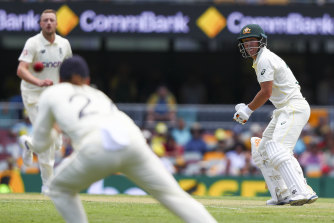 So for the sake of it, instead of going back through the sliding doors, let’s think about how they might run or stall in the tracks in the second Test in Adelaide.

Root wins the toss and this time his decision to bat is straightforward. He makes a century; he’ll get one sometime in this series. So does Burns. For all his contortions at the crease, he does make hundreds. He already has against Australia. Later, Jos Buttler goes to town. He lights up under lights. 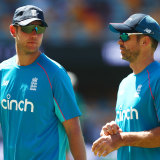 Stuart Broad and James Anderson are fit for the Adelaide Test.Credit:Getty Images

Without Josh Hazlewood, Australia’s attack is thinner by one layer. Jhye Richardson is a talented bowler, but as yet has few Test miles in his legs. A crucial catch goes to ground. They sometimes do, you know?

For Australia, Warner is sore, Marcus Harris tentative. The way the match unfolds, the middle order is exposed to twilight’s gremlins and goblins. For even the most deft captain, it is hard to manipulate to avoid this. Travis Head’s Gabba hundred was a joyride, but even he admits it won’t work every time.

Ancient but crafty, Jimmy Anderson has another day-night out. Perhaps Stuart Broad is there too, and perhaps Jack Leach isn’t. This time, Ben Stokes is really Ben Stokes. This time, no one no-balls. This time, the edges catch, the catches go to hand, and stick.

There’s an injury. No one is wishing this on anyone, but in this series between two match-soft teams, it’s an underlying condition. It showed up in the first Test.

Tell England they’re dreaming? Of course. But Test cricketers have to dream. They can plan all they like, but without a dream, a plan is just a set of instructions. Steve Waugh was one who used to dream his heroics into being. Romance still has a role in the game.

England will tell themselves they’re a good team. Sometimes they are. This calendar year, they’ve won Tests in Sri Lanka, India and England. 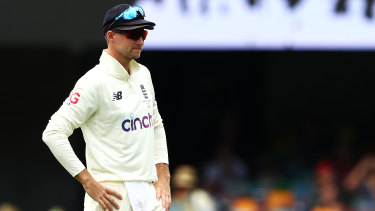 Scars? They’re overplayed. Modern cricket is replete with instances of teams instantly reversing catastrophic defeats. Last year, India was bowled out here for 36 and won the next match and the series. Earlier this year, England lost to India by plenty, then won the next match by an innings.

Scars heal quickly now. It’s a miracle of modern sports medicine. The way teams prepare is so methodical that scars are broken down as if with a solvent.

If England lose again here, it won’t be because of the legacy of previous losing series in Australia and some sort of vice-like grip Australia have on their psyche. It will be because Australia at home are historically very hard to beat, and harder still when their luck is in, and they have their noses in front.

Hard, but as India demonstrated last summer, not impossible.