The fifth Test between England and India at Old Trafford has been cancelled amid a coronavirus outbreak.

The England Cricket Board confirmed the news via a statement and said the visitors could not field a team for the final Test of the series.

India was leading the series 2-1 and it was unclear what the final result will be, with the ECB quickly amending an initial statement that said India forfeited the Test and the series was drawn 2-2.

The Board of Control for Cricket in India said it was offering to reschedule the match.

“Both the boards will work towards finding a window to reschedule this Test match,” the BCCI said.

India’s entire touring party was forced to isolate in its Manchester Hotel on Thursday and cancel its last pre-match practice after assistant physiotherapist Yogesh Parmar was the latest person to test positive for the virus.

“The BCCI has always maintained that the safety and wellbeing of the players is of paramount importance and there will be no comprise on that aspect,” the body said.

“The BCCI would like to thank the ECB for their cooperation and understanding in these trying times.”

The lucrative Indian Premier League will resume on September 19, which could complicate attempts to reschedule the match. 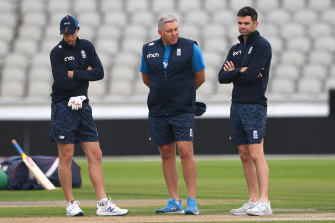 “Following ongoing conversations with the BCCI, the ECB can confirm that the fifth LV= Insurance Test between England and India Men due to start today at Emirates Old Trafford, will be cancelled,” the ECB said in a statement.

“Due to fears of a further increase in the number of COVID cases inside the camp, India are regrettably unable to field a team.

“We send our sincere apologies to fans and partners for this news, which we know will cause immense disappointment and inconvenience to many.

“Further information will be shared in due course.”

India recorded a 157-run victory in the fourth Test and was chasing a first series win in England in 14 years following on from their Test series triumph in Australia last summer.