Alabama Express' disappointing run in the Australian Guineas has been explained via an elevated temperature, with the horse ruled out of a tilt at the All-Star Mile due to the illness.

Jockey Michael Dee described the failure as "too bad to be true" and post-race examinations revealed the colt had pulled up with some sort of illness.

Trainer Mike Moroney said the horse had been treated as soon as possible and he hoped Alabama Express would get over the illness quickly so he can resume his campaign.

But an All-Star Mile tilt has been ruled out.

"We got him treated pretty quick so hopefully we get on top of it pretty quick," he said.

"He's obviously got something going on, some infection going on somewhere or a virus.

"Lucky we got it early because it was on the rise late last night and we treated him and it's still risen slightly this morning. We're hoping we got it quick enough and can get it back down and keep him going."

Moroney said the elevated temperature shows there was a genuine excuse for his poor performance.

"That's why he raced so flat; disappointing," he said.

"He [Dee] couldn't explain it. He said he travelled lovely, was there to quicken up and didn't show his normal zip and then stopped out of it." 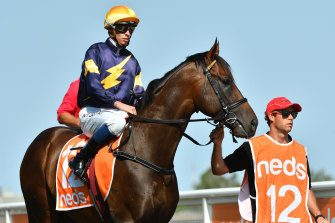 Moroney said he would wait until the horse had recovered before plotting a path for him.

"We'll just see how long it takes to get over," he said.

"Sometimes it's only 48 hours if you get on top of it early but we've just got to err on the side of caution with him.

Chicago Cub provided some joy for Moroney on Saturday, winning his third race in his past four starts.

The four-year-old son of Zoustar will now spell, having won six from 13 career starts.

"Really happy with him; he's had a great prep," Moroney said.

"He's always shown a lot, we've waited for him and he's come good.

Vengeur Masque finished eighth of nine in the listed Roy Higgins at his second run this preparation and Moroney said they would bypass the Adelaide Cup.

"He won't go to the Adelaide Cup, he's a run behind so he'll either run in the Mornington Cup or the BMW," he said.

Meanwhile, Moroney will be represented by multiple group 3 winner Tofane in next Saturday's group 1 Newmarket Handicap.

"I think she'll be right in it. She's come on in leaps and bounds since her first-up run, a weight-for-age 1000. It wasn't really the right race but it was the right timing for her."