Even Marnus Labuschagne has acknowledged the necessity of recent difficult conversations about the environment overseen by Australia’s coach Justin Langer, in order to clear the air ahead of the World Cup and Ashes campaigns.

From his last-gasp selection for the 2019 Ashes squad to his subsequent flourishing into the most reliable Australian top-order player of the past two years, Labuschagne has been characterised as one of Langer’s best investments.

Marnus Labuschagne has been characterised as one of national coach Justin Langer’s biggest success stories.Credit:Getty Images

Labuschagne was left out of the limited overs squad that ventured to the West Indies and Bangladesh on the basis that he was already playing for Glamorgan. However, he indicated on Wednesday that he had been in conversation with Langer in recent days, amid numerous rounds of “robust” discussions that began when Tim Paine, Aaron Finch and Pat Cummins fronted Cricket Australia’s chief executive Nick Hockley and chair Earl Eddings in extraordinary circumstances.

“It’s never nice when it comes out like it has, so that’s not how we want to do it,” Labuschagne said. “But we want to make sure that we come together as a team and for those things that have come out, it’s been spoken about that it’s come to a head now and there’s been conversations had, and we can all move forward and have our focus on winning this World Cup and retaining the Ashes.

“I’ve spoken to the coach, absolutely. I’ve been in touch with him in the last couple of weeks and just having a chat to him. I think it’s really nice that those players and coaching and support staff are out of quarantine and can spend a bit of time with their families before what is going to be a massive five months.” 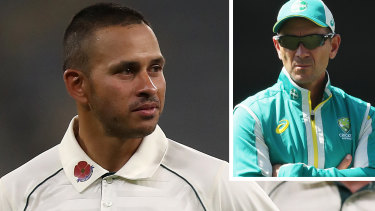 Usman Khamaja has thrown his support behind Justin Langer.Credit:Getty Images

With Glamorgan, Labuschagne traversed a UK operating under vastly different COVID-19 circumstances to Australia, with high case numbers but far greater vaccination rates at present. He said he understood the very human yearning of England’s players to ensure that they and their families are well accounted for in plans for the Ashes tour.

“There was a little bit of chatter about that but the welfare of the players and making sure their families can come out here,” Labuschagne said. “Everyone can recognise it, you don’t need to be a cricketer to recognise the importance of making sure the mental health of all the players is in a good space, especially after the World Cup, followed by the Ashes. It’s a really long four-five months.

“But I have no doubt between the government and Cricket Australia we’ll be able to sort it out and get ourselves in a position where we can have a full-strength England side versus a full-strength Australia side.”

Usman Khawaja also spoke at an event in Brisbane to launch “Play cricket month” for CA, albeit at a time when New South Wales and Victoria are in a state of lockdown. He was rich in his praise for Australia’s new selection chair George Bailey, who Khawaja believes will close what he has considered a generation gap between players and selectors in recent years.

“I’ve known Bails for a long time, we’ve played together and against each other, so we’ve got a good rapport,” Khawaja said. “I’m a big fan of George Bailey … for a long time the Australian selectors felt a bit disjointed because they were a bit older coming into the game and I felt it hindered a bit, because T20’s only been around for 15 years.

“I felt like they might not have fully understood all the levels and everything that goes with it, whereas I think George has done everything. He’s played all formats, he’s performed in all formats, and he understands what it takes to succeed in those different formats. So, I think it’s a really good appointment.”