Melbourne Cup-winning trainer Danny O'Brien is aware of the spotlight on Vow And Declare as he returns from last year's brilliant Cup victory.

The four-year-old resumes in Saturday's Australia Cup, looking to repeat the efforts of Fiorente in 2013 to win the 2000-metre group 1 following a Melbourne Cup win.

Fiorente won the Peter Young Stakes before winning at the autumn feature, however O'Brien has a long-term plan in mind to get Vow And Declare back at headquarters on the first Tuesday of November.

The campaign will involve a similar preparation to last year; a trip to Queensland for the Tatt's Cup before a Melbourne Cup title defence.

But O'Brien said that doesn't rule out Vow And Declare as a winning chance on Saturday.

"The horse is going to present in really good shape for his first-up run on Saturday," O'Brien said.

"We'll leave it to the form analysts to decide if he measures up, but his Caulfield Cup and Melbourne Cup form is really good form.

"He'll enjoy the cut out of the ground, he loves Flemington, he loves 2000 metres – he was very good in the Turnbull – so I'm sure he's a live chance."

He'll next run in the Queen Elizabeth in Sydney before three runs in Queensland to gain some winter fitness ahead of the spring. 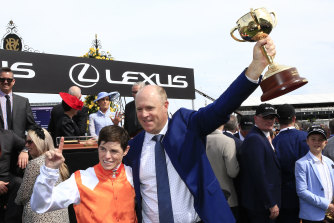 "Obviously he's a few months older now and he's still a horse that's developing – he's about 30 kilograms heavier than what he raced in the Melbourne Cup – and we're hoping that makes him that little bit bigger and stronger and has a little bit more speed for that 2000-metre race.

"It takes a good horse to keep winning and it takes a really good horse to go to weight-for-age and win, but we think this guy has got that improvement in him. We're looking forward to seeing what he can do tomorrow."

Banquo will represent the Flemington stable in the group 1 Newmarket Handicap with blinkers applied, while Russian Camelot runs over 1400 metres en route to a South Australian derby.

"He just needs to get experience as much as anything," O'Brien said.

"Every time he turns up he's going to get a bit better and we think he's a stayer of some promise.

"I think he's very talented and I think he can certainly win. He's right in the market.

"His first-up run at Ballarat, albeit in a maiden, was terrific in the spring and he's got the talent to win anything we run him in."