‘The risk was no greater than going to the pub’: Culture Secretary Oliver Dowden defends decision to go ahead with Cheltenham Festival in front of 250,000 people after grilling from Piers Morgan on Good Morning Britain

Culture Secretary Oliver Dowden has defended his decision to argue the Cheltenham Festival should have gone ahead.

The four-day Festival was staged as planned in front of 250,000 people, with additional hygiene measures in place due to the coronavirus pandemic, and concluded on March 13 – with Prime Minister Boris Johnson addressing the UK 10 days later to impose the current lockdown.

Appearing on Good Morning Britain, Dowden was accused by presenter Piers Morgan of ‘actively encouraging’ people to attend the likes of the Cheltenham and the Liverpool versus Atletico Madrid football match after the Government decided not to ban major events until late March.

The Cheltenham Festival was staged as planned in front of 250,000 people last month

‘The risk at mass gatherings was no greater or less than it would have been in pubs or restaurants, and the advice at that point was that we did not need to ban mass gatherings.’

Asked whether the advice was wrong, the Cabinet minister replied: ‘As the situation developed, the scientific advice changed and we changed our guidance off the back of it.

‘But mass gatherings are not different to any of those other events I described and at the appropriate moment we took the decision to close pubs, to close restaurants.’ 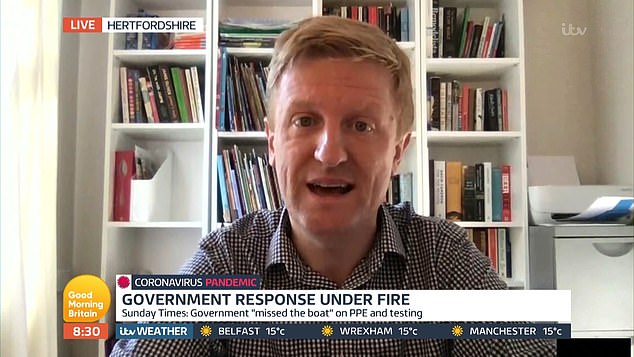