We are living in strange times.

Where, for instance, has “the line” gone? It used to be such a feature of the Australian cricket landscape. Without ever being able to say where the line was, Australians never crossed it. The closest they came was Nathan Lyon’s admission that they sometimes headbutted it. It’s what GOATs do.

Now the line has vanished altogether, unless you count the line each team forms after every Test to shake hands with the other.

There’s a bug in the system somewhere.

And what’s become of “hard but fair”? It was a diabolically clever formulation, implying that the two concepts were mutually exclusive and that if Australia were going to err on one side, it would not be fair. Now it’s little heard. If anything, it’s hard and fair. Frankly, that’s crossing the line.

It’s as if there are more existentially important matters in the world right now.

It’s hard to recognise this Australian cricket team, and it’s not just because every time you look up, someone new comes in and is man-of-the-match. 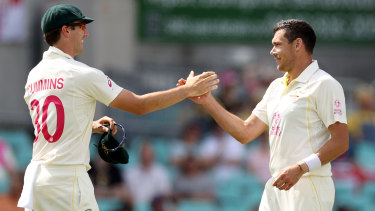 At the start of the 2013/14 Ashes, David Warner talked about the “scared eyes” of the Englishmen and then captain Michael Clarke promised England No.11-and-a-half Jimmy Anderson a “broken f—– arm” and the barrage never stopped until it was 5-0. 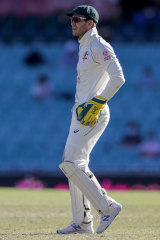 Tim Paine gets hot under the collar playing against India in Sydney.Credit:AP

In Ashes 2017/18, Lyon talked about “ending careers” and banged on a bit more about headbutts and the feed from the pitch microphones should have attracted an R rating, and it did not let up until it was 5-0 again. Sorry, 4-0.

As recently as 12 months ago, an Australian team pledged to reform under Tim Paine, when unexpectedly defied by India, lapsed into snippy old ways in Sydney.

But look now. Listen now. This series’ hallmark is its conspicuous good grace.

Yes, there’s been plenty of talk, but, as far as can be overheard, no personal attacks. A good shot elicits a rueful smile from the bowler, a good ball an acknowledgement from the batsmen. At the death in Sydney, Australian captain Pat Cummins was sledged – by his own team – because he was wearing a helmet in the field. It did look odd on him.

Pleasantries are observed. Milestones are applauded. When Usman Khawaja reached triple figures in the first innings in Sydney, several of the England team went to him with felicitations at the next break. When Jonny Bairstow reached his hundred, Khawaja and Warner offered fist bumps.

It’s as if cricket is just cricket after all. 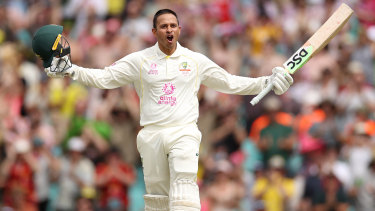 True enough, England haven’t had much to chirp about. But the Australians have bitten tongues they once proudly used to lash. You can argue that they have not been tested by adversity, but in recent Ashes series here, it was dominance that brought out their overbearing worst. 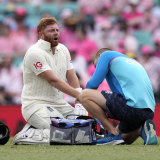 Jonny Bairstow fought through pain to make an admirable century.Credit:AP

The English cricketers are getting more lip from English media than Australian cricketers. One called their batting in Melbourne “gutless”.

It’s an epithet usually reserved for snipers on the field and anonymous antagonists in the crowd, not limited batsmen facing high-class fast bowling on sporty wickets.

And it’s unfair. In Sydney, they were all but disembowelled, but they were not gutless.

All four pitches used in this series have posed physical threats, as well as technical challenges, to batsmen. They’ve made for lively cricket – too lively for England until their improved showing in Sydney. In all ways, they braced themselves.

It’s pitches like these – exciting some, unnerving others, stimulating all – that often push cricket teams over the top. In this series, both teams have both delivered and ridden the bumps with a grin. 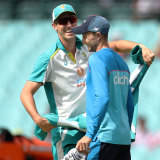 Anyone would think it was all a game.

Why all this grace? The personnel has something to do with it. Joe Root is not naturally belligerent, nor are his team. Pat Cummins is on the record on how he thinks verbal campaigning is a waste of the energy he needs for bowling, and that is now his team’s de facto policy.

Alex Carey, Cameron Green, Jhye Richardson, and Michael Neser all are from a generation that seem more preoccupied with good lines than an uncrossed line. And Scott Boland doesn’t say boo to anyone. Any minute now, this Australian team is going to be called likeable.

What is going on? COVID-19, that’s what. Both sides have chafed against the restrictions the virus has imposed, and the general uncertainty. Remember that when this series began, it was not yet decided where it would end. Each side has been pinched: Australia has had to stand down two players, including Cummins. England has been reduced to a skeleton coaching staff (not to mention all those broken bones).

Literally, it’s bugged them. But it also seems to have kept them humble and self-aware in the face of the certainty that the whole world is still on a sticky wicket. Despite their lowly performance, some English have won hearts. And despite supremacy, Australia have not brandished it in the face of their opponents.

It’s a boast that shouldn’t have to be made, but it’s gratifying to be able to make it. It’s not really a silver lining, but at least it’s not that sanctimonious old line that is never crossed.