If ever there was a sports sponsorship deal for the times, this is it. And it will give those who say the game has become too sanitised plenty of ammunition.

In a period of ubiquitous focus on hand hygiene, this summer's men's white-ball international series against India will be branded with Dettol.

Dettol has signed on as sponsor for the Australian men’s team’s white-ball series this summer.Credit:Cricket Australia

It is part of a new four-year deal between Cricket Australia and the disinfectant brand's parent company Reckitt Benckiser (RB).

The sponsorship deal extends to the men's team support staff, previously sponsored by Bupa, as well the national women's team. The wheels were set in motion when Dave Rankine, regional director for RB Health ANZ, got in touch with CA's sports science manager Alex Kountouris mid-year after reading about cricket's fresh challenges with hygiene.

The flagship element of the deal is the naming rights for home men's one-day international and Twenty20 international series. Dettol replaces Gillette, whose name had been attached to the men's white-ball series as recently as May when this summer's international cricket schedule was released. That schedule is now about as valuable as the paper it was written on, with a raft of changes related to coronavirus meaning the men's team's calendar will bear little resemblance to what was initially intended. 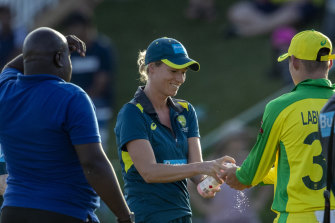 CA is optimistic that its dealings with Gillette will continue. "Cricket Australia is in positive discussions with Gillette to continue a partnership into the future after a successful three-year tenure as ODI and T20 naming rights partner. Further information will be announced in due course," a CA spokesperson said on Sunday.

CA is still yet to release its revised men's international schedule for this summer, which will feature four Tests against India, preceded by three ODIs and three T20Is against the same opposition. The postponement of an ODI series against New Zealand has opened the door for Australia's top male players to have greater involvement in this summer's Big Bash League, an issue that has been a sore point in the extremely strained relations between Seven West Media and CA.

As part of the new union, CA and Dettol say they will work together to investigate the transmission of germs in sport as cricket administrators search for ways to deal with the challenges of playing the game in a coronavirus world. Dettol has also indicated a keenness to support the return of grassroots and community cricket in this vastly different environment.

The ICC earlier this year banned the use of saliva for shining cricket balls, an enormous move culturally and historically.

"We feel exceptionally fortunate and proud to be partnering with Reckitt Benckiser. Dettol is such a well-known and trusted brand with a long heritage, both here in Australia and around the world, and their support will give confidence about protecting the return of community and elite cricket this summer," said CA's interim chief executive Nick Hockley.

"Beyond this summer, we look forward to working with Dettol to help embed hygienic behavioural change into schools, clubs and communities through cricket.”

The Dettol deal follows the rebranding of men's home Test series with the Vodafone name after Domain stepped away from its sponsorship with CA.

KFC recently expanded its sponsorship deal, but Qantas has scaled back its involvement with cricket as part of austerity measures announced last week.