Australian cricket’s most powerful figures fly to India on Thursday to meet with a group of south Asian broadcast giants in search of a $200 million overseas rights windfall after the Indian Premier League (IPL) broadcast auction next month.

Cricket Australia’s chief executive Nick Hockley, chair Lachlan Henderson and board director Richard Freudenstein – the former Foxtel CEO and head of CA’s broadcast rights committee – have several days of talks lined up either side of a Board of Control for Cricket in India’s (BCCI) invitation to the IPL final on Sunday night.

This year’s IPL final will provide the backdrop to critical meetings for Australian cricket’s future.Credit:Getty

The broadcast contract to beam the IPL around India and the world is set to be fought over in a public auction for the first time in June, with the tournament’s value widely expected to rocket to more than US$1 billion a season.

Any companies missing out on auction day will be left scrambling for other available cricket. These include the ICC’s global rights for men’s and women’s World Cups, but also the rights to broadcast Australian cricket into India – the second-most valuable rights commodity for CA after the $1.2 billion domestic rights held by Foxtel and Seven.

For most of the past 20 years, the India rights have assumed ever more significance on CA’s balance sheets, growing from around $35 million to $85 million and then up to $140 million for the cycle including the 2014-15 India tour of Australia.

In 2017, CA signed a six-year deal estimated to be worth around $150 million for Sony to hold the rights, outbidding the previous holders Star. The deal expires in 2023, a year before the Foxtel and Seven agreement. 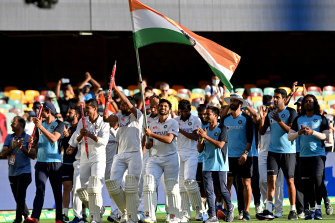 However, last year it was revealed that the agreement was in fact only worth about $110 million because the fine print included the playing of extra matches between Australia and India that were not a part of the globally agreed schedule and did not ultimately take place.

That $40 million shortfall, combined with a similar drop in the value of the UK rights to Australian cricket last year, has made the Hockley, Henderson and Freudenstein mission to India even more crucial.

CA is trying to overturn a projected $90 million revenue shortfall over the next two years into a financial position that buttresses the organisation against the risk of another major disruption redolent of COVID-19.

More broadly, there is an acknowledgement within CA that numerous past deals, while financially lucrative, have not always been strategically successful, either in terms of relationships with partners or setting up the game to be best placed for the future.

As such, CA’s next deal in the Indian market may not be as simple as going to the highest bidder: the rights holder’s reach and the possibility of future co-operation in other territories may also come into the equation.

The International Cricket Council is set to unveil the next men’s future tours program in July and reveal, among other things, how often India will tour Australia over the next cycle of series.

It will not be the first visit by members of CA’s broadcast team to India this year. In March, the head of media rights Nikki Linney was part of another group that met with representatives from broadcasters and streaming services including Viacom Network, Star Network, Amazon Prime and Fan Code. CA’s relationship with Amazon is already well established through the production of The Test documentary series about the fortunes of the men’s team in 2018-19.

Audiences for the IPL have been down by about 25 pe cent this year, attributed partly to the end of COVID lockdowns in India, the playing of four instalments of the tournament in the space of about two years, and the poor campaigns of the league’s biggest clubs: Mumbai Indians, Chennai Super Kings and Kolkata Knight Riders all missed the finals.

Nevertheless, a broader field of rights bidders in a world where digital streaming is playing an increasing part in the way sport is watched should aid the BCCI in wringing a huge sum out of the IPL rights.

In the meantime, Australian cricket’s leaders will test the ground and hope to swoop on crumbs falling from the table of the auction’s unsuccessful bidders. CA declined to comment.