Over the past quarter of a century, mares have dominated the Australian racing landscape.

Dual Cox Plate winner Sunline began the trend and was followed by triple Melbourne Cup winner Makybe Diva, whose feats will not be replicated in our lifetimes if Lee Freedman’s famous post-race quote from 2005 is anything to go by.

Sprinter Black Caviar then made the sport her own, unbeaten in 25 starts including 15 group 1s. Who would have known then that Winx would take the baton so soon, with a record four Cox Plates in a string of 34 wins in a row.

Saturday’s Turnbull Stakes favourite Verry Elleegant might not be put in the same conversation as the four mentioned above, but her trainer Chris Waller – who also trained the mighty Winx – believes she’s befitting of the “modern-day champion” tag, simply because of her longevity and her ability to win over a range of distances.

“Whether she’s remembered forever will be determined by her next few starts, no doubt,” Waller said of Verry Elleegant.

But two boys are laying down the challenge this spring. The first is Incentivise, a horse uncovered out of the bush in Queensland, who rocketed into favouritism for the cups following his weight-for-age win in the Makybe Diva Stakes. The second, who won’t clash with Verry Elleegant until the Cox Plate, is Zaaki, whose rapid rise to the top level has led to bookmakers paying out on the Moonee Valley feature. Waller sees a lot of Hartnell – Winx’s arch-enemy – in Zaaki.

While Waller could have avoided a meeting with Incentivise on Saturday, he opted against the easier Hill Stakes to take on the boom gelding in the group 1, sticking to a Turnbull-Cox Plate pattern that has worked so well for him while also giving jockey Damian Lane a chance to ride the horse before her grand final later this month.

“Through some good horses we’ve managed to train – one in particular – I’ve seen the importance for racing to have these good horses racing together,” Waller said.

“As much as we can dodge and weave these days with a lot of great options worth good prizemoney, I’m still a racing fan like everyone else.”

So, why have all our champions of late been mares? 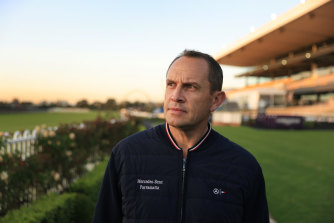 One leading reason is that many of our promising young colts are bought and taken to Hong Kong as yearlings, while those who do race in Australia and reach the elite level at a young age are prematurely retired to stud, denying them the chance of proving themselves against the older horses.

“[Or] we might have just struck an era,” Waller said. “You might get three [male] horses come out in the next era and be exactly the same [as Makybe Diva, Black Caviar and Winx].”

Although, Waller admits he may have had one or two himself, had the likes of Yes Yes Yes and The Autumn Sun not retired so soon.

“I was always very scared of The Autumn Sun, had he raced on for another year, how he would have situated with Winx,” he said.

Beyond the Cox Plate, another tilt at the Melbourne Cup beckons for Verry Elleegant. Waller hasn’t needed to change the way he’s trained her, after last year going into the Cup from the Caulfield Cup, simply believing that if she’s well enough, she deserves another go at the 3200-metre classic.

“Like any dad, any coach, any trainer, you want your son or daughter to have the best possible chance in the competition she’s in,” he said.

“I think the weight makes it hard, but we’ve got to respect she’s got weight for the reason. 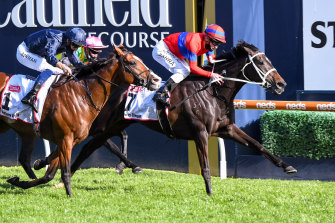 “First of all Saturday, second Cox Plate and of course if everything’s going to plan we’d give it [the Cup] serious consideration, but I’m a great one for pulling up stumps early if my gut tells me we should protect her for the autumn.

“We won’t be over-training her to win the Melbourne Cup, the Cox Plate is the grand final for sure.”

Punters on the money

Another big handicap race in Sydney, and another race in which Chris Waller holds the key chances.

Asked how punters should split his Epsom Handicap contenders in Saturday’s group 1 at Randwick, Waller said: “I often use the punters to help me.

“Fair dinkum, I’ll use the punters as a guide more as I am a guide to them, and I respect their judgment, especially the smart money,” he said, adding that he scratched Shared Ambition from the Metropolitan because he was shorter odds in the Hill Stakes.

“My gut tells me Hungry Heart. She’s got the same credentials as Winx; did a great job as a three-year-old, she’s come back at four when Winx won it and with a winnable weight, which is so helpful.

“She’s drawn well, she’s got a jockey on that knows her. There’s just so many positives there.”