The obvious, and the not-so-obvious gave The Everest another two runners on Tuesday as Jacquinot and Joyful Fortune secured slots in next month’s $15 million sprint at Randwick.

Coolmore confirmed a deal to take Jacquinot, which traces its roots back to the Jerry Plains farm and became its 64th group 1 winner in the Golden Rose on Saturday, while Aquis surprised by announcing former Hong Kong sprinter Joyful Fortune.

Coolmore Australia boss Tom Magnier was quick to pounce on Jacquinot, starting negotiations in the minutes after maybe the best-ever win in the Golden Rose and within 72 hours had him in his slot.

“We bred him at home, and to have him represent Coolmore in The Everest is a huge thrill for everyone at the farm,” Magnier said

“As he crossed the line in the Golden Rose, he just reminded me of Yes Yes Yes in The Everest, and we obviously moved very quickly to try to get him for our slot and we are delighted to secure him.

“There is no race in the world like The Everest and Yes Yes Yes, which now stands at Coolmore, was one of my biggest thrills in racing and I think we can do it again.”

The Mick Price and Michael Kent jnr-trained Jacquinot was not even being considered for The Everest before the Golden Rose, but his explosive finish changed his future in a matter of seconds.

“We were all in for the Caulfield Guineas before the Golden Rose, but he has always promised to do something like that and it changed things,” Kent junior said.

“He has three weeks to freshen up and be ready for the biggest challenge in racing taking Nature Strip and the like, but we think he is up to it.” 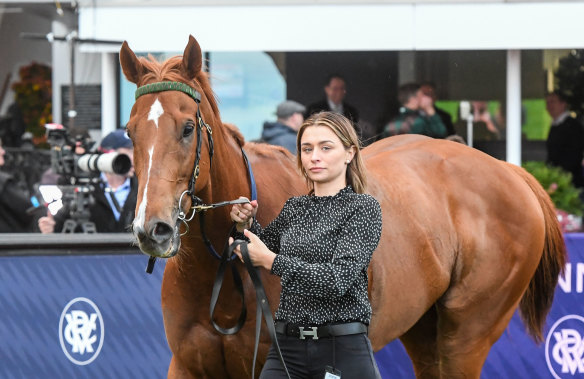 Joyful Fortune will run in The Everest.Credit:Getty

Magnier said Golden Slipper runner-up Best Of Bordeaux, which had been the frontrunner for the Coolmore slot, would head to Melbourne with the Kacy Fogden-trained Snitzel colt to target the Blue Sapphire and the Coolmore Stud Stakes.

It means there are eight runners confirmed for The Everest led by horse of the year Nature Strip, which is still the dominant $2.10 favourite for the world’s richest sprint on October 15.

Overpass is expected to be announced in the coming days by another slot holder, leaving Godolphin and two others to announce their runners in The Everest after Aquis found a horse from left field.

Joyful Fortune had been retired from racing in Hong Kong due to bone chips, but after those were removed he has been given another chance in the Mark Newnham yard. His win down the straight 1000m at Flemington in benchmark company at his first start back in Australia attracted Aquis’ interest.

“He ran blistering time in Hong Kong and was ultra-impressive first up at Flemington with big improvement to come, he handles all track conditions, and we believe he will make his presence felt on the day”, Aquis Director of Sales Jonathan Davies said.

Newnham believes he has a very fast horse in Joyful Fortune, which beat Everest contender Eduardo at his first barrier trial in August, and pointed out he is the third-fastest winner down the Sha Tin 1000m.

“He is a horse that has done everything right since he got here and has shown all the qualities of a top-class sprinter and he could be the x-factor in The Everest,” Newnham said.