Tanveer Sangha didn’t always aspire to be a leg-spinner. What really set his pulse racing was thundering in off the long run and hurling the ball down at fearsome pace – a fine plan until he entered his early teens.

What was classified as express in under-10s was dialled back to medium in under-11s, then regressed to “medium-slow” by under-12s. With his speedometer readings going in the opposite direction of his cricketing aspirations, Sangha hatched a plan B.

Off-spin was the first port of call, until he realised his fingers weren’t long enough and strong enough to give the ball the required rip to have it zing off the pitch. Wrist spin it was, then, so he turned to two of the greatest of them all, Shane Warne and Anil Kumble, to steer him down the right path.

He hadn’t met either at the time – and still hasn’t. Instead, he spent hours watching them bowl on YouTube, as well as any leg-spin tutorial he could find, before heading out to the yard or the nets to try and replicate what he had consumed.

“I had some people that tried to teach me leg-spin, but I mainly just looked at a lot of YouTube videos, Shane Warne and Kumble; any how to bowl leg spin video tutorials. When I was learning, I’d watch that then go and try to put that into practice,” said Sangha, who looms as a key man for the Thunder when the BBL season begins in early December.

“Everyone has a unique way of bowling, so I wasn’t exactly trying to replicate the way other people bowled. When I was young, it was difficult to understand the mechanics of leg-spin and turning the ball right to left. I was just trying to get the ball to land on the pitch when I first tried.”

Tanveer Sangha is a rising star in Australian cricket.Credit:Getty

Sangha celebrated his 20th birthday on Friday but has long been considered one of the nation’s most exciting spin bowling prospects. He signed with the Thunder when he was 17 after being discovered in the Thunder Nation Cup, the annual multicultural tournament run by the BBL franchise, and was Australia’s leading wicket taker at the under-19 World Cup in South Africa in 2020.

Now he’s expanding his range, have taken seven wickets for NSW in a pair of Sheffield Shield games against Victoria, before tormenting them some more during the week when he collected 4-21 in the 50-over Marsh Cup. 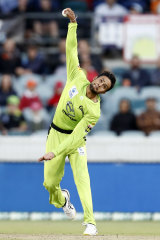 All in the wrist … Tanveer Sangha.Credit:Getty

It’s tempting to call him a prodigy, but he concedes the truth is far less glamorous. When he first turned to leg-spin, just as many balls flew into the top net, or over the net entirely, as found their way to a respectable line and length.

“But I’m very happy the way they are coming out now. I just need to be consistent now across all forms of the game.

“My stock ball, my leg-spin, that’s what I always practice. All people said to me was to perfect your stock ball. I would definitely say that’s my best ball and the one that gets the most focus in the nets.”

Now he’s on the national stage, has he heard whether Warne, the leg-spin legend whose videos inspired him to take up the art, has become a fan or his rapidly expanding cricketing resume?

“I have no idea,” Sangha said with a chuckle. “And I’m not really on social media or Twitter or anything like that, so I’m not able to keep up with what’s being said.”

In any case, Sangha is too busy just enjoying the ride. It wasn’t that long ago he was wowed by the being able to play on a real turf wicket at Spotless Stadium and gobsmacked by the size of the dressing rooms. After taking his firsts steps down the road at the top level, he never wants to stop.