Alan Davidson, a brilliant pace bowler and one of Australia’s finest all-rounders, died on Saturday morning surrounded by his family in Sydney. He was 92.

Tributes are flowing for Davidson, who is being remembered for his feats on the field as well as his service to the game as an administrator, and his contribution to charity.

His death comes a day after fellow great Ashley Mallett, one of Australia’s greatest off-spinners, lost his battle with cancer, aged 76.

A member of three Ashes-winning teams during his 44-Test career in the 1950s and ’60s, Davidson played his best cricket under the captaincy of his schoolboy adversary, NSW teammate and close friend Richie Benaud.

Davidson was one of the players of the match in the famous tied Test against the West Indies in 1960, claiming 11 wickets and making 44 and 80 to be the first man to score 100 runs and take 10 wickets in a Test, despite playing with a broken finger. Among his rivals in that game was close friend Sir Garfield Sobers.

Post retirement, he served as the president of the NSW Cricket Association from 1970-2003, was Trustee of the SCG for 20 years, and also a national selector for five years from 1979-84.

The flag atop the Members Pavilion at the SCG, where he played his last Test, was at half-mast in his honour on Saturday, while NSW and Victoria players wore black armbands on the final day of their Sheffield Shield game.

In recognition for his contribution to sport and charity, he was made a member of the Sport Australia Hall of Fame, the ICC Hall of Fame, awarded an Order of the British Empire (MBE) in 1964 and the Order of Australia (AM) in 1987. 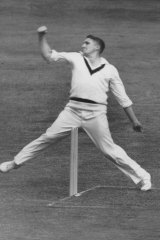 League greats Paul Gallen and Bradley Clyde and boxers Danny Green and Daniel Geale were among those left in awe of Davidson’s feats after they took the field together in a charity game in 2013 at his beloved Pratten Park.

The then 84-year-old trained for the game by rolling over the arm in his backyard before bowling a maiden with his only over to former Test player Gavin Robertson.

“Alan Davidson’s passing is a sad moment for Australian cricket and for cricket across the world,” Freudenstein said.

“Alan was a colossal figure in our game, not only as one of the finest players to have represented Australia and NSW, but for the positive influence he exerted across the game as an administrator, mentor and benefactor.

“The tremendous skill and the boundless spirit with which Alan embraced cricket and life embodied everything that is great about the game. He will remain a shining example for every player who follows in his footsteps.” 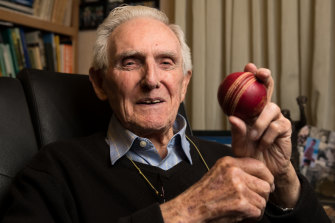 Former Australia captain Steve Waugh paid tribute to Davidson, thanking him for the support he showed the team in the early days of his career.

“One of the best of all time to wear the Baggy Green and an even better person,” Waugh wrote on Instagram. “Alan always had time for everyone, imparting life lessons and wisdom.

“He was a regular in the change rooms during the tough times in the mid 80s, unfailing in his support of the team whilst many had given up hope. May he Rest In Peace.”