Australia has powered its way to a nine-wicket win over England to take a 1-0 lead in the Ashes series after a resounding day four performance at the Gabba.

Chasing just 20 for victory after England collapsed badly, losing 8-77, Australia strolled past the total after lunch to ensure they have a Test in the bank ahead of pink ball duties in Adelaide.

After England stood tall on day three, it was a hugely disappointing day for the tourists, who surrendered their overnight momentum with slim resistance before their batting order crumbled.

In the short reply, Marcus Harris was joined on opening duties by Alex Carey, who stepped in ahead of the injured David Warner (rib) after pocketing a record eight catches on his Test debut behind the stumps.

He was the only casualty on the brief road to victory, falling for nine as Harris (9 not out) hit the winning runs with Marnus Labuschagne not required to contribute from the other end. First innings centurion Travis Head was man of the match.

Life seemed reasonably good for England when Root and Malan strode back to the crease under faultless Brisbane skies. The new ball was at least 10 overs away, more than enough time to steady for the day, and their efforts from the previous day suggested they had some measure of the Australian attack.

That pair had guided England to 2-220, just 58 runs behind, and Root seemed on the verge of a deserved first Ashes century in Australia, where he had made seven 50s without being able to capitalise. Malan, too, was in the midst of a fine innings, although one with a degree of luck after he gloved one back to Lyon when on 37, with that being the subject of a half-hearted appeal, no review and no movement from the umpires.

But Malan could only add two runs to his overnight total of 80 before he became the 400th Test wicket of Nathan Lyon, who toiled away fruitlessly on Friday but looked a different bowler on Saturday morning as the momentum quickly returned to the home side.

Root was now the key man, if he wasn’t already, but could only progress his score by three runs before he offered a lazy edge to Cameron Green on 89. All of this was unfolding with the old ball and Josh Hazlewood was still watching it all unfold from the outfield after barely bowling on day three.

By this point, the collective heart of England looked to have been broken. Ollie Pope (4) and Ben Stokes (14) weren’t able to begin a partnership of their own, before Buttler nicked one off Hazlewood on 23 to give Alex Carey his seventh catch of his debut Test. 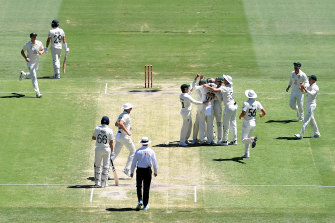 This looked anything but a dull fourth day wicket. All of the Australian fast bowlers, along with Lyon, created carry and bounce and England never looked comfortable. Stokes was tentative across both innings and must find some of his customary bravado if England are to be a factor in the series.

England scrambled for long enough to ensure Australia had to bat again, with Lyon getting his third and fourth through Robinson and Wood, before Green accounted for Chris Woakes to leave the chase a foregone conclusion.

Related posts:
Previous Post: Murray racing clock to be fit for round one after undergoing same surgery as Cleary
Next Post: Rangnicks Man Utd transfer plan would have ruled out Cristiano Ronaldo and two more deals