Sydney Thunder captain Hannah Darlington is adamant her side can finish the season unbeaten and make the finals despite another loss leaving the defending WBBL champions with a huge task to stay alive.

After taking out last year’s competition, the Thunder have won just two of their eight matches this season and find themselves at the bottom of the ladder.

On Sunday, the Thunder crashed to the Brisbane Heat by five wickets in Adelaide, meaning the Sydney team must now win every one of their last six games to stay in the running for the finals.

Set a target of 144, the Heat claimed the victory after managing to chase down the total with 10 balls to spare.

Darlington said the shortened nature of this year’s season due to COVID-19 has made it harder to find momentum, especially after a string of losses.

“In a tournament like this, you’ve got to be on your game every game because anyone can win on any given day,” she said.

Smriti Mandhana of the Sydney Thunder walks back to the pavillion after being dismissed.Credit:Getty

“It’s a pretty tricky competition to get going in.”

After Australian vice-captain and last year’s Thunder skipper Rachael Haynes pulled out of this season’s competition, 19-year-old Darlington was handed the captaincy reigns at the 11th hour.

The youngster made a last-ditch defensive bowling effort during Sunday’s match in an effort to save the day, finishing up with 3-21.

But the skipper’s spell came too late, after a half-century from Brisbane star Georgia Redmayne (57 from 45 balls) put the Heat on the path to victory.

“The partnerships worked really well today and we put a lot of pressure on the fielders,” Redmayne said.

“We’ve come off two losses after a really good start to the tournament and knew we had to put out a really good performance to come up against these guys today.“ 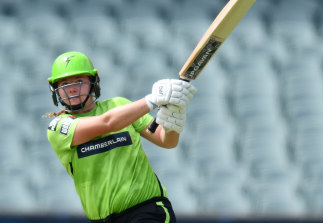 The Sydney Thunder, led by Hannah Darlington (pictured) have gone from champions to the bottom of the WBBL ladder.Credit:Getty

Redmayne’s effort with the bat was supported by a stunning bowling spell by Poonam Yadav, who took the key wickets of Smriti Mandhana (37 from 24 balls) and Phoebe Litchfield (40 from 32 balls) and finished up with figures of 3-17 from her four overs. Yadav’s wizardry restricted the Thunder to 7-143 and it wasn’t enough to hold off Brisbane.

The Heat’s balance in skill with both the bat and the ball is what the Thunder are currently missing, Darlington said.

“For us as bowlers, we need to hit the stumps. For our batters, I think it’s about reading the game a bit better,” she said.

“So everyone has a goal for themselves in the next couple of games. We need to win every game, so that should help the group better know what we need to do.”

It was a disappointing loss for the Thunder, who had appeared to finally get their season back on track after the back-to-back wins before Sunday’s loss.

Darlington said her aim as captain is to keep the side calm during what is a rough time for the side.

“For me, it’s all a new experience and I’m just learning on the run,” Darlington said.

“My message to the girls is to keep it really simple and just make sure everyone is clear with what they have to do because I think everyone plays their best cricket then.”