Few players epitomise the muddle of Australia’s Twenty20 approach quite like Matthew Wade. Though he has only played in one T20 World Cup in 2012, his frequent recalls to the team are based on a superb Big Bash League record at the top of the order.

But when picked for Australia, Wade invariably bats in the middle order unless David Warner or Aaron Finch are absent.

With both taking part in this World Cup, Wade believes he will be playing a middle order role again, and is extremely confident he will be chosen ahead of the newcomer Josh Inglis, who succeeded as a middle order player for the Perth Scorchers last season.

Matthew Wade is a dangerous top order Twenty20 batter in Australian conditions, but not so much in Asia.Credit:Getty Images

“They’ll make a decision at the start of the tournament and that player will play the tournament,” Wade said when asked about himself and Inglis. “I played the last series and I’m confident that I’ll play this series. I’ve batted pretty much anywhere in the order for Australia, so it’s just getting back and tapping into that experience. 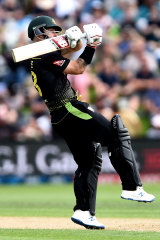 “The five men out is a very big difference to the two men out, so [I’m] just working on a few different things. Thankfully I’ve got some shots that are pretty vital towards the back end of the innings, with laps and things like that. So I’m training towards middle to lower order, because I know I can go back to the top of the order and I’ll be fine there.”

As a middle order player, the evidence that Wade can make a difference at this World Cup is scant. As an opening batter for Australia, Wade’s strike rate is a more than respectable 144.78 in 16 innings, and it is where he has made his only three 50s in T20 internationals.

But take Wade down the order and he struggles: not only to make runs, but to do so at the sort of pace that might make a difference in a game. In 19 innings batting at numbers four to seven for Australia, Wade has a top score of 32, an average of 12.56 and, most troublingly for someone perceived as a powerful hitter due to his top order efforts for the Hobart Hurricanes, a strike rate of just 93.05.

Then there are conditions to take into account. In 11 innings in T20 internationals in Asia, Wade’s average drops to 8.8 and his strike rate to just 69.29. That struggle in Asia is also reflected in ODIs, where his strike rate of 72.83 is by a distance his slowest by region. Wade is an extremely dangerous batter at the top of the order in Australian conditions, but after a decade in international cricket, an influential performance at this World Cup would be an outlier.

Nevertheless, Wade believes he has the mental and technical wherewithal to score the runs Australia are likely to need down the order, drawing a parallel with the knack of Mike Hussey to pick gaps even on pitches not suited to heavy hitting.

“Depending on what we need, it’s go out there and go straight away from the first ball,” Wade said. “The thing that I’m not going to put any preconceived ideas in my head about what I need to do in the middle order … we saw in the West Indies and Bangladesh that a lot of the time it’s not going out there and swing as hard as you can from ball one.

“A lot of guys have got power, I feel like I’ve got the power if I need to find boundaries, but if conditions are going to be hard work then it’s going to be a Mike Hussey type role, you’ve got to hit it over those box men [at cover and mid-wicket] and run as hard as you can.”