Crystal Palace 1-0 Watford: Hornets are RELEGATED from the Premier League after Wilfried Zaha’s penalty consigns them to the Championship again

Roy Hodgson departed Selhurst Park with applause and chants of ‘one of our own’ in his ears and a hug from match-winner Wilfried Zaha but also beaten and, sadly, relegated from the Premier League for the first time ever.

After confirming this week that he will be retiring for the second time this was at least a fitting venue for one of Croydon-born Hodgson’s final matches.

But going down is no way for one of football’s most respected figures to bow out after a managerial career that began in 1976 and has taken him all around the world. 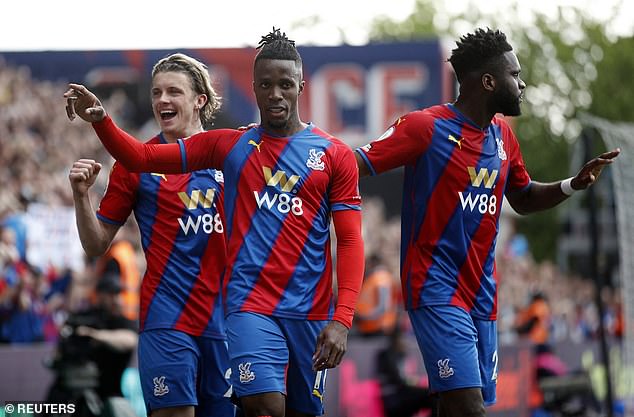 Having first announced plans to quit management last year while at Crystal Palace, the reduced crowds due to Covid meant Hodgson was denied the Selhurst Park send-off he warranted after four seasons in charge.

He got that on his return, applauded to the dugout before both halves and back off the pitch at full-time, Hodgson blowing a kiss back to the crowd in appreciation.

But he deserved a much better finish than Watford’s tame surrender of their Premier League status, this being their sixth defeat in a row, the Hornets losing a league high 25 games so far this season and 11 on the bounce at home.

They were all but down before kick-off and in need of a miracle to stay up. In truth, it was never going to happen.

And, in keeping with much of their season, Watford offered little resistance to prevent the inevitable unfolding.

Palace’s of margin of victory against the 10-man Hornets was narrow but do not be fooled by that. This was a 1-0 cruise for Palace.

Other than from goalkeeper Ben Foster, the defeat that sealed their fate contained few signs of fight or defiance, qualities a number of Hodgson’s sides have possessed in the past including the Fulham and Palace teams he has previously kept in the Premier League against the odds, a rescue mission he was unable to repeat one final time.

Hodgson is not to blame for their relegation however. They were doomed before he arrived in late-January as Watford’s third manager of the season.

This was also their fourth Premier League relegation, a total topped by only Norwich and West Brom, and their problems run deeper than just who is in the dugout.

Thanks to a first-half penalty from Zaha, who would have enjoyed his role in Watford’s demise given his role as pantomime villain against them, Palace, meanwhile, climbed up to ninth maintaining their hopes of a first top-10 finish since 2015 and beating their best Premier League points tally of 48.

Aside from a Samir header deflected tamely wide it was all one way traffic in the first half.

If Watford had not already accepted their fate, they had a funny way of showing it.

For Palace it was only a matter of time before they scored their first goal and, once they did, a question of how many more might follow.

Michael Olise and Zaha threatened inside the first 10 minutes and it was 20 before Watford posed anything even resembling a threat.

The inevitable opener came just after the half hour when Olise’s header back across goal hit the outstretched arm of Hassane Kamara in the box.

He appealed long and loud enough that he had been fouled though the check by VAR Kevin Friend only backed up referee Graham Scott’s decision.

Zaha buried the penalty, emphatically sending Ben Foster the wrong way to score his 13th league goal of the season, drawing him level with Harry Kane in the scorer’s chart.

It was only thanks to Foster that Watford were not further behind at the break.

His save to claw away Marc Guehi’s header was excellent and one to divert a close-range effort from Olise over was equally sharp.

It was so comfortable for Palace it was little surprise they took their foot off the gas after the restart until the twinkle-toed Odsonne Edouard jinked away from three Watford defenders, fired in a shot that squeezed through Foster’s legs but clipped one of them and hit the far post.

Palace’s task became even easier once Hassane Kamara, who had been second best in his running battle with Olise, fouled the Palace winger once again and was dismissed.

And sub Jean-Philippe Mateta had two headed chances to score a second for Palace but was denied by Foster from the first and then headed the rebound wide.

Those spurned chances did not matter though. This was a rare occasion when 1-0 was a more than comfortable scoreline.