Wilfried Zaha has welcomed the introduction of VAR into the Premier League, saying it has helped to prove that he is “not a cheat”.

The Crystal Palace forward has previously accused the media of portraying him as a ‘diver’, while Watford’s mascot mocked the 27-year-old by diving in front of him in 2016.

VAR has proven controversial this season – only last week officials were forced to admit they made a mistake by not sending off Giovani Lo Celso during Tottenham’s defeat at Chelsea – but Zaha sees the positives.

He told The Times: “VAR has helped a bit. For example, against Arsenal [in October], I got booked instantly. It got rescinded.

“Maybe it might be reputation. It’s like, ‘Wilf’s a diver.’ I’m glad VAR can see those things. 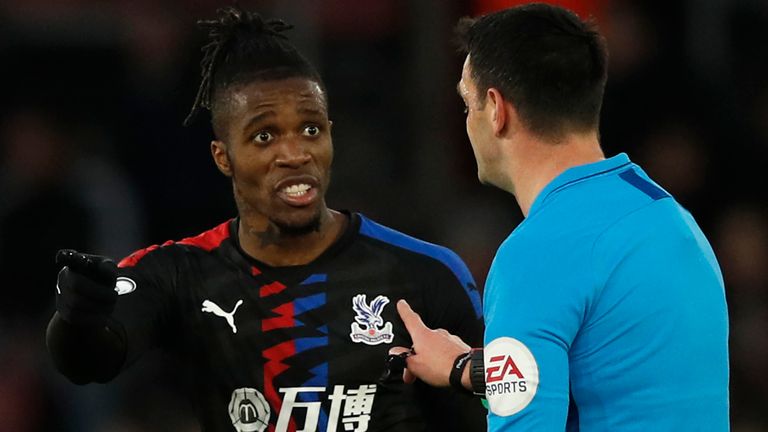 “If I’m sprinting at you, and your tiniest touch trips me over, I’m going to go flying. To people, everything just seems soft.

“Now there is VAR, that will just prove that I’m not a cheat.”

Despite VAR apparently aiding him on the field, Zaha has struggled to recreate the form he showed last season.

His 10 goals and 10 assists for the campaign prompted Arsenal and Everton to make offers for him last summer, but Palace held firm.

Zaha has just three goals and five assists for the current season, but he admits he still has his eye on a move to a club that will allow him to realise his dream of playing Champions League football.