Manchester United staff reportedly believe the club’s recent upturn in form under Ole Gunnar Solskjaer is down to the work being done at their Carrington training complex. The Red Devils have picked up ever since their 2-0 defeat to Burnley at Old Trafford back in December.

Manchester United beat Derby 3-0 in the FA Cup on Thursday night, continuing their rejuvenation under Solskjaer in the process.

The Norwegian was facing calls for the sack back in December after his side slipped to a chastening 2-0 Premier League defeat to Burnley at Old Trafford.

But United have responded well in the time since, putting the likes of Tranmere Rovers, Manchester City, Chelsea, Watford, Club Brugge and now Derby to the sword.

There’s a sense that, after years of floundering since Sir Alex Ferguson’s retirement, the Red Devils are heading in the right direction.

And The Athletic say United are pinning their recent winning run on the work being done at Carrington behind the scenes.

Much has been made of the club’s coaching staff amid their turbulent campaign.

Reports in the past have suggested that some players believe their current set-up lacks continental expertise.

But it appears United are content with how things are and think that the club are beginning to turn a corner.

Solskjaer spent the time before the Derby game drilling more attacking patterns into his squad.

And that meant that, instead of going up to Derby on the Wednesday, the players went on the coach the day of the match instead.

Meanwhile, speaking after the match against the Rams, Solskjaer hailed his United side for their ‘professional’ performance at Pride Park.

“I’m very pleased with the performance and to go through,” the 47-year-old said. 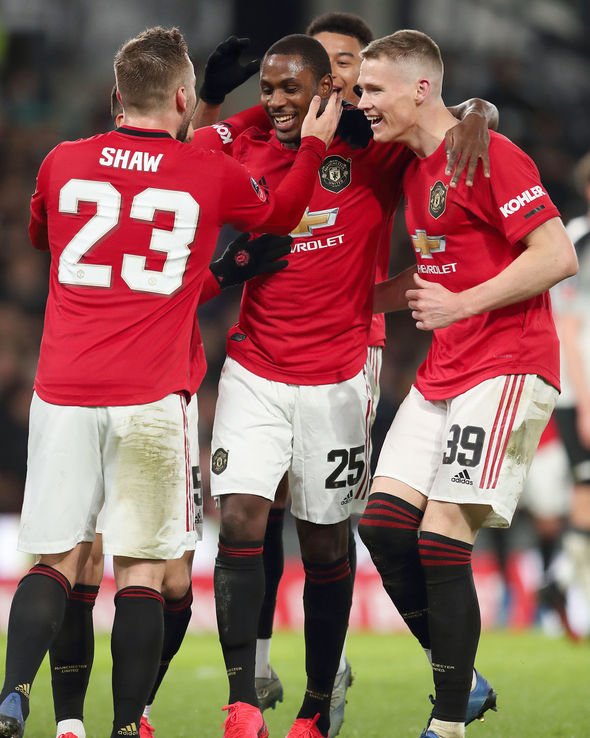 “You never know, away from home, being the favourites and having [Manchester] City on Sunday how it’ll affect their mindset – but it was professional.

“Thursday was the highest priority because we’re not going to pick and choose games or competitions.

“We have to go for everything, that’s what it is to be at Manchester United.

“It’s another away draw, we’re used to that now. Is it a seventh in a row? We’ll have to do it the hard way if want to go all the way. We’ve got a chance now.

“He’s doing what he says on the tin and what we asked for when we signed him,” the Norwegian added.

“I’m very happy with him. That type of striker is vital for a team.

“There’s more to come, he’ll improve and get sharper and more used to us. I’ve got no doubt he’ll only get better and better.”

United are next in action against Manchester City (4.30pm).

The Red Devils have already beaten Pep Guardiola’s side twice this season in the Premier League and EFL Cup respectively.