Manchester United are attempting to sell their youth policy to Jude Bellingham to convince the midfielder to join them over their rivals, claims transfer expert Duncan Castles. Bellingham was given a tour of the United training ground earlier this week amid interest from the Red Devils.

The 16-year-old has starred for Birmingham City in the Championship since bursting into the first team earlier this season.

United had offers for Bellingham rebuffed during the January transfer window, with Castles saying the player was not convinced he would be given opportunities to play under Ole Gunnar Solskjaer.

However, Solskjaer has given youth a chance this season, with academy graduates Mason Greenwood and Brandon Williams playing prominent roles.

Castles says United will be making Bellingham aware of that and insisting he will be given a chance to play.

“In January we told you of their £25m offer for the player which was rejected by the player and his father because they felt the development path wasn’t right for him at Manchester United,” Castles said on the Transfer Window podcast.

“So you see Man United now having a third attempt to sign this player and to convince him that the right career move is to come to Old Trafford and to be part of Solskjaer’s rebuild.

“They’ll be selling him the story of ‘We promote youth, we put young players in the first team, we’ll give you the opportunity to play’.

“And we’ll see what his decision is, whether he can be convinced, having rejected United on a couple of occasions already, that Manchester United is the best place to further career or whether he follows that route that players like Jadon Sancho have done and go to Germany for a couple of seasons to experience another league, a different kind of football, train in a different environment, probably have a better chance of getting regular first-team football, or take up an offer elsewhere.”

A host of Europe’s top clubs are interested in signing Bellingham.

Castles says Birmingham will want the player to return on loan for a season before he joins up with his new team. 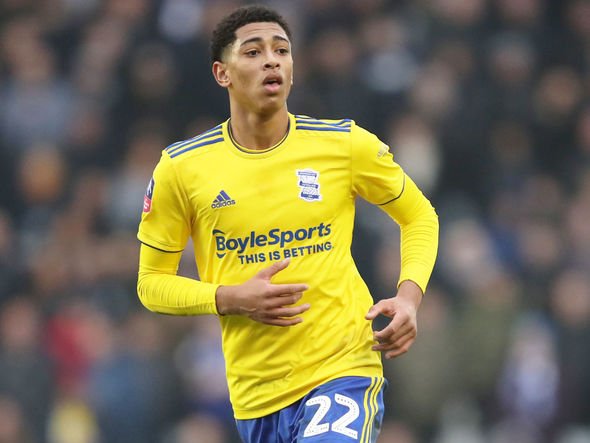 He added: “This has now got to the stage where the majority of the biggest teams in European football are not only just watching the player, they’re trying to decide how much he is worth and whether they can put together an offer that convinces him that they’re the right place for him to go after he leaves Birmingham City.

“City will sell, probably you’re looking at a fee of about £30m, and City would prefer to retain him for a year before allowing him to leave to whichever club he goes to.”

Bellingham has made 32 Championship appearances this season, scoring four goals.