Gareth Southgate has revealed he was forced to contact Trent Alexander-Arnold three weeks before choosing his England squad for the Euros to tell him that reports in the media weren’t true. A number of stories emerged in the build-up to Southgate’s announcement, claiming there was no indication Alexander-Arnold would be selected for the tournament this summer despite his improved form.

Back in March, Alexander-Arnold was left out of the Three Lions squad to face San Marino, Albania and Poland due to his struggles with Liverpool.

Yet his omission prompted a reaction as Alexander-Arnold helped inspire Liverpool to a top-four finish, winning eight of their last 10 Premier League matches and drawing the other two.

Southgate has admitted he wanted to be clear with the right-back that he was still very much in his thinking.

“I spoke with Trent about three weeks ago,” said the Three Lions boss after including Alexander-Arnold in his squad.

“I felt there were stories that were so far off the truth. I would never normally speak to a player because I read a lot of stories about myself that aren’t true, but I have to accept that’s the job I’m in and people speculate and write it’s exclusive.

“But when it’s a player, they might feel reading it that maybe it’s true and the manager is speaking to the press behind their back. That’s obviously not the case.”

Still yesterday, a new report emerged stating that Alexander-Arnold was set to be left out of the squad.

The credibility of the story was then questioned by Southgate, who hinted he’d already told Alexander-Arnold he was in at this point.

“Even last night we are dealing with that and puzzled because he is there taking set-pieces for the game tomorrow then he’s reading that he’s not going to the European Championships. I really don’t understand it,” he added.

“For me, it’s no drama, I accept as England manager this is what I deal with. That’s the world I live in.

“But for my players, I want to protect them. We are having to speak to Trent last night to say ‘look, we don’t know where this is all coming from, it’s nonsense’.

“People then jump on it and say I have an agenda and I don’t like the kid. It’s an incredible situation really but, as I say, not bothered about it from my point of view, but I always think about the players.” 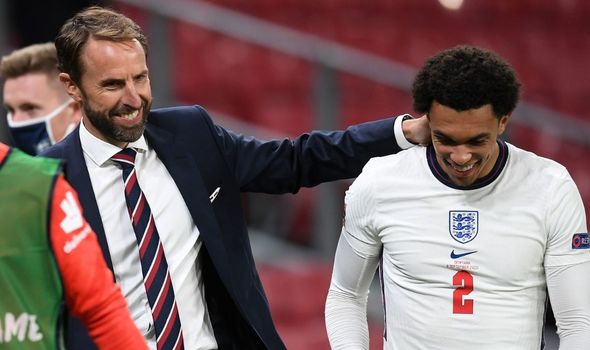 He did cite that all four of his chose right-backs can play in other positions as well and he feels Alexander-Arnold can step into midfield.

The Liverpool man’s message to his critics was clear after he made the cut.

Posting on his social media channels, he wrote: “Always believe in yourself. Silence the doubters.”