West Ham have been on quite a rollercoaster ride this season. Just three months ago, they were speeding along to an unlikely top-four place – with Arsenal, Tottenham and Manchester United in the rear-view mirror.

But there have been some bumps in the road since that 2-0 win over Norwich on January 22nd, that lifted them into fourth spot. David Moyes’ side have broken down and can’t seem to jumpstart themselves back into the race for Champions League football. That path seems blocked off – though it doesn’t mean they can’t take a diversion to reach their final destination.

The Hammers’ form is starting to read like a set of traffic lights that have slowed them down – red light, green light. Four defeats and two victories in their last six league games. But the Europa League has acted as a saving grace and there may be something special building after eliminating tournament heavyweights and serial winners Sevilla in the last round.

Now six points behind Spurs – who occupy fourth and have a game in hand over them – manager David Moyes may opt to put all his eggs one basket and go all out to win this competition.

West Ham have quickly fallen away from the top four battle, but their European dream is alive

West Ham fans aren’t treated to a run in Europe too often and they are enjoying the ride after finishing sixth last season. There’s every chance fans won’t have to put their passports next term, with the team still lingering in the top seven.

They might have to contend with a place in the UEFA Conference League if Wolves or Manchester United pip them to sixth, but Moyes will take heart in the progress the team are making on the pitch since he took over.

He famously left another Champions League chaser in Everton back in 2012 – leaving for what he thought were brighter shores at Man United – but insists he is now committed to the project at the London Stadium and believes he can take them to the big time and get them competing with elite teams.

‘We’ve moved quickly at West Ham to being close to that club, so if we can make it two years in a row in Europe it would be an incredible achievement,’ he said. 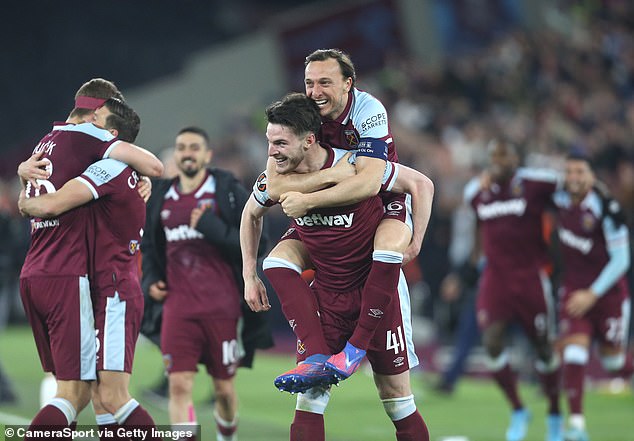 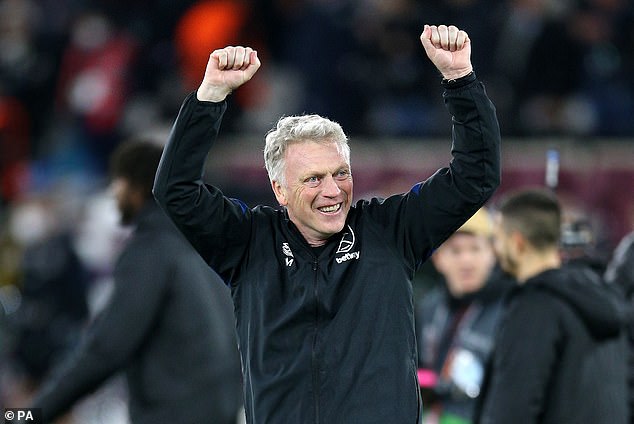 West Ham’s record in Europe does not smile fondly at them – in fact this is their first ever season in which they have reached the group stage or beyond in this competition – the Europa League or its previous iteration, the UEFA Cup.

Apart from winning the Intertoto Cup in 1999, the club’s greatest moment in Europe came when they won the European Cup Winners’ Cup in 1965. Now Moyes is trying to kickstart a new era in east London, and their performances in the continent this season have made them out to be stalwarts of the competition.

Finishing sixth last season placed them straight into the group stages and they made little fuss as they swiftly topped their group – losing just once to Dinamo Zagreb – winning four games and drawing the other one.

They scored 11 times and let it just three goals – the joint fewest from that round.

West Ham have scored 14 goals overall, with 11 of those coming from open play and three from set pieces – with nine different goal scorers, the joint-highest in the competition, showing how many players Moyes has who can step up and contribute. 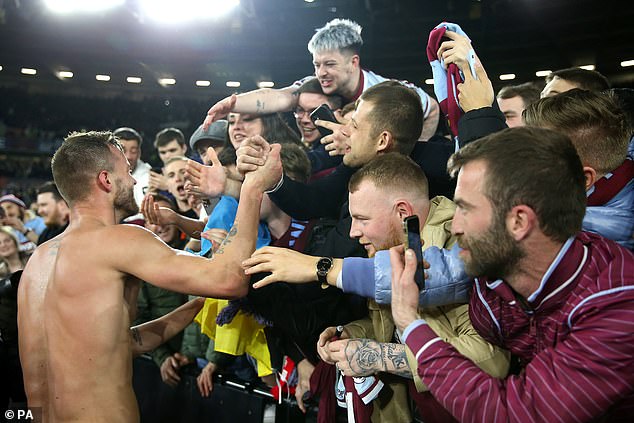 Topping their group with 13 points was impressive, but their race looked run when they were drawn to play the reigning champions and six-time winners Sevilla in the Round of 16. Surely there would be no stopping Julen Lopetegui’s side, who normally sleepwalk through these sort of ties.

It certainly seemed that way in the first leg – where Munir’s strike sealed a 1-0 win to take back to the London Stadium. But then the Londoners stunned the LaLiga side with a 2-0 win, wrapped up in extra time, to make a serious statement about their ambitions for this tournament.

The likes of Tomas Soucek – who was on the scoresheet on the night – and Declan Rice were in top form, and there is real hope that the England star can help lead the Hammers into the latter stages of the competition, alongside the likes of Said Benrahma and Michail Antonio.

It was Rice sending out a warning to their Europa rivals after knocking out Sevilla, saying his team-mates do not fear anyone left in the competition – even Barcelona. 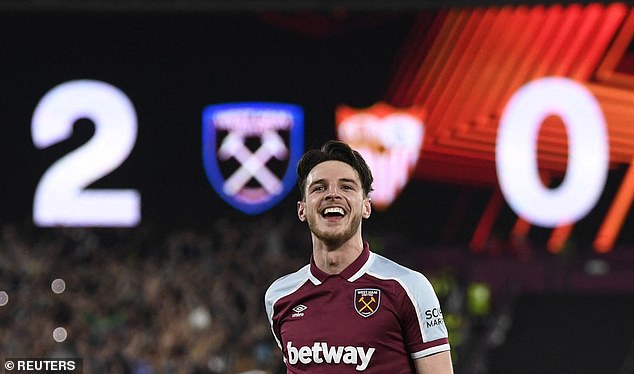 ‘There’s no-one to fear. Sevilla were probably the favourites. When the draw came out, people thought we had the hardest draw and we were going to get knocked out… and we’ve knocked them out!

‘So, look, we can go away anywhere and get a result and teams coming here know they’re in for a game when they step into this stadium with our fans, so I’m ready to take anyone.’

They might not have momentum in the Premier League, but in Europe it is a different story. They were duly given another tough tie in the quarter-finals against Lyon – the top performers in the group stage with five win and 16 points, but they still gave them a difficult evening.

It finished 1-1, but Lyon needed a second half equaliser from Tanguy Ndombele after Jarrod Bowen had opened the scoring – with the Ligue 1 side pouncing on their numerical advantage after Aaron Cresswell’s sending off. 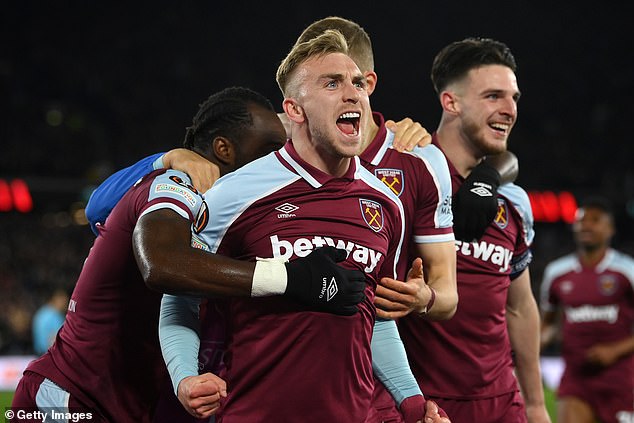 But the way West Ham were able to hold their own against Lyon should give them confidence – though the French outfit are struggling domestically this season – currently down in 10th place – and will have weaknesses they can exploit.

West Ham will hope their recent defensive frailties don’t resurface when they travel to France. They let in 23 goals in all competitions since the turn of the year, conceding an average of 1.2 goals per game, while they have an xG against them of 30.3 – or 1.6 per game.

The tie with Lyon is finely poised, but the team cannot allow their inconsistencies to follow them into this competition – their season is riding on it.