Ben Foster has come under criticism from Watford supporters after gifting Watford tickets to a well known Liverpool fan who was subsequently ejected from Vicarage Road.

UFC star Paddy Pimblett took to Instagram following Liverpool’s 5-0 win over Watford on Saturday to reveal that he had been removed from the ground.

The Liverpudlian branded the Hornets a ‘s*** club’ in a video which showed him being ejected by stewards.

He added: ‘Ben Foster gave me the tickets, I didn’t get to pick where I sat.

‘Watford, Ben Foster, I love you mate. But I hope Watford go down, youse are horrible, horrible.’

And it hasn’t gone down well with Watford supporters.

Another said: ‘The result and performance was shameful, and this s*** with Pimblett and Foster is just another level. Unbelievable.’

A post shared by Paddy The Baddy Pimblett (@paddythebaddyufc)

It proved to be a difficult afternoon for Foster in goal as Jurgen Klopp’s men were rampant and put five past the struggling hosts – who were hoping to impress in Claudio Ranieri’s first game in charge.

Speaking after their humbling defeat, Foster admitted Mohamed Salah – who scored twice in the romp, including a dazzling solo effort – had him worried every time the ball was at his feet.

‘There are times when he gets the ball that as a goalkeeper he just worries you,’ Foster said. ‘He can do anything: go inside, outside, drop a shoulder, his movement is incredible. 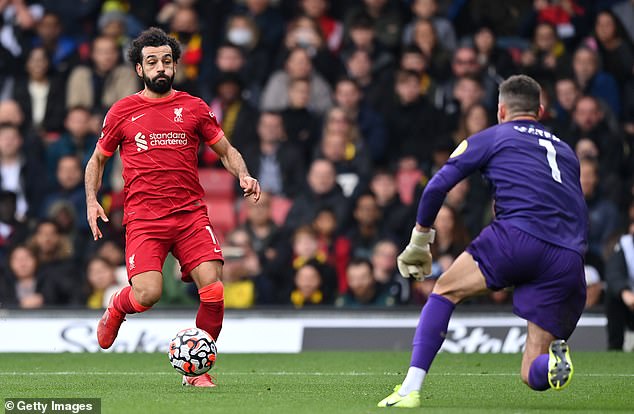 ‘And his work-rate, that’s the bit I like the most. He is so willing to run, so willing to work, it is a rare quality in a player with all the other attributes as well.

As a keeper you think, ‘Oh my God, don’t let him shoot’,’ said Foster. ‘Ronaldo, for example, if he’s within shooting distance of the goal he can make the ball go up and down, dip left and right.

‘Seeing that up close and personal against Liverpool, I wouldn’t disagree with Klopp’s assessment that he is one of the best players in the world at the moment.’