Melbourne City have become only the second team after Sydney FC to win back-to-back A-League premiers plates after surviving a nervous second half to see off the Wellington Phoenix 2-1 at AAMI Park.

Patrick Kisnorbo’s team looked to be coasting to victory courtesy of an early own goal and a point-blank header by Jamie Maclaren shortly afterwards, but were made to sweat after Ben Waine pulled a goal back nine minutes into the second half.

City came into this match knowing that nothing short of a win would be enough to seal the title: a draw or a loss would hand the plate to bitter local rivals Melbourne Victory, whose demolition of Sydney FC on Saturday night had put them in pole position. 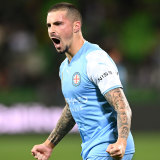 MY ENEMY’S ENEMY IS MY FRIEND

Victory fans swelled the crowd, taking possession of the northern end of the stadium, trying to cheer Wellington on and spur them to an unlikely triumph. Their presence wasn’t lost on the City players, with Maclaren acknowledging them in ironic fashion before the game kicked off, and he and Andrew Nabbout saluting them sarcastically at the end.

A City failure here would have been a fairytale for Victory, the fallen giants whose turnround this season under Tony Popovic has been remarkable after they finished bottom of the table last campaign.

It would have been a huge embarrassment for Patrick Kisnorbo’s City squad who, powered by the riches of the UAE-controlled City Football Group, have been able to construct a line-up featuring several Socceroos and well-credentialled foreign imports.

The young midfielder has been one of the success stories of City’s past two seasons, graduating to international level, and he says the consecutive titles are “awesome”.

“It’s brilliant,” he told Paramount+. “Back-to-back, I am proud of the boys. It’s been a long, tough season. We know it’s not finished yet, but this is unreal.”

Western United came into the final round of A-League games harbouring hopes of their own maiden premiers plate in just their third season in the competition, but fell agonisingly short, taking third place on the table three points behind Victory, and four off City.

They needed Victory to drop points in Sydney and for themselves to win in Adelaide on Sunday night to stand any chance, but despite taking an early lead at Coopers Stadium through Dylan Wenzel-Halls they couldn’t complete the job and went down 2-1 to the Reds.

Adelaide end the season in fourth position – a creditable effort for a club which lacks the resources of the big Melbourne and Sydney rivals and relies on a lot of home-grown youngsters to buttress its squad, with Central Coast fifth, and Wellington in the last finals berth.

The Victory contingent who were willing on the Kiwis were silenced early as City got the sort of start they could only have dreamed of when young Phoenix midfielder Sam Sutton deflected Taras Gomulka’s corner into his own net in the third minute.

They doubled the advantage seven minutes later, the goal once again coming from a set piece. This time Gomulka’s corner from the same left flank was met by Andrew Nabbout, whose flicked header across goal was pounced on by Maclaren to nod home from close range.

The goal was his 15th A-League strike of the season and guaranteed him his third Golden Boot in a row, and his fourth overall.

Waine gave the Phoenix – and Victory – hope and City’s nerves were on edge for the remaining 35 minutes before the final whistle went with City supporters praying for the end.

Both City and Victory get a week’s rest while Western face the sixth-placed Wellington and Adelaide host Central Coast this weekend in elimination finals.

City will play the lowest-placed winners in a semi-final over two legs, while Victory will face the highest-placed elimination final winners in another two-legged semi.