Thomas Tuchel tried to hide his emotions but ‘leaked’ rejection and exasperation to impatience and anger when talking about Romelu Lukaku: Chelsea boss is showing signs of distress, says top body language expert

Thomas Tuchel faced the media on Friday morning and was tasked with picking the bones out of a stunning interview Romelu Lukaku had given to Sky in Italy in which he talked up a return to Inter and spoke of being unhappy at Chelsea.

Tuchel was less than impressed with the words of the Belgian striker but did look to diffuse it in his Liverpool pre-match press conference – but he did give some tell-tale signs away.

Here, expert JUDI JAMES breaks down what we can learn about the German’s first outing since Lukaku’s bombshell interview.

Tuchel’s body language as he discusses Romelu Lukaku before trying to shut the subject down suggests a man attempting to mask his feelings by underplay techniques to suggest nonchalance and to create the aura of ‘calm’ he says he needs for his team.

His underlying micro gestures or ‘leakage’ rituals suggest deeper emotional responses though, ranging from rejection and exasperation to impatience and mild anger.

His desire to conceal these emotions appears so strong that he uses his hand to shield his genuine facial expressions from the reporters more than once, suggesting he might be struggling to maintain his aura of calm indifference.

When he is first asked about Romelu his body language is incongruent. Using verbal euphemisms like ‘unhelpful’ and ‘noise we don’t need’ he first rounds his eyes in what looks like a response of surprise at the question but his eye-rubbing (0.13) suggests a desire to mask his emotions. 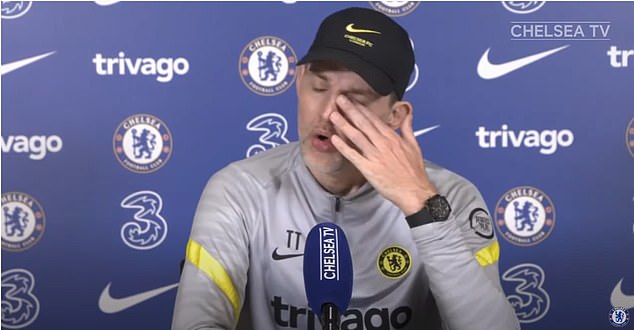 His on-message body language seems to come next, with several shoulder and mouth-shrugs to diminish the importance of the subject and his arms folded to suggest that ‘calm’.

There are more open signals of what look like discomfort or distress (0.56) as he performs a double tongue-poke rejection signal before licking his lips and rubbing his eye again.

The weary-looking eye-rub creates a shield or barrier for his facial expression, which involves sucked-in lips and an eye-stare to suggest more negative emotions than his phrase ‘Don’t feel unhappy’ might imply.

At 3.05, when he is asked about any ‘disciplinary action’, a micro-gesture suggests possible aggressive arousal: His nostrils flare very slightly before he puffs his lips in a gesture of tension. 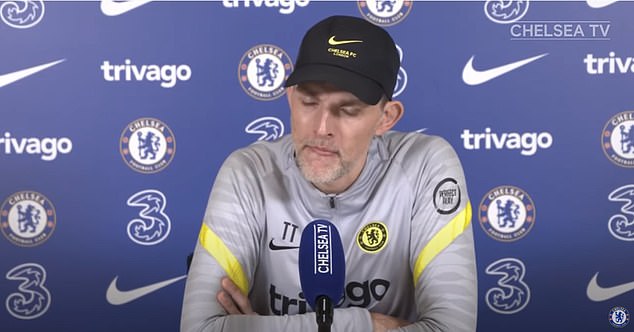 As the questions keep coming he folds his arms and laughs to suggest everything is fine but there are also signs of physical discomfort from him, like fidgeting or squirming in his chair.

He seems to assert control over these signs of tension by clasping his hands in front of his torso but his pursed lips and the repeat of his eye-rub suggest disapproval of the subject-matter.

At 10.00 in the press conference he is rubbing his fingers over the face of his watch here in a gesture of what looks like suppressed impatience or a desire for the interview to end.

When he is asked how he will ‘deal with it’ one eye closes and he sucks his lips in like a marksman taking aim. 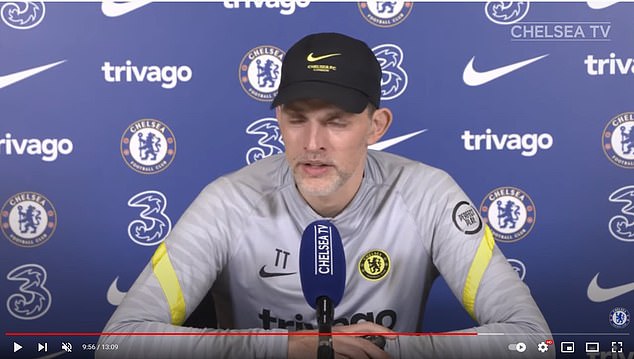 By rubbing his fingers over his watch on his left wrist, Tuchel gives off a mood of impatience

Romelu Lukaku’s interview seems to illustrate the message that his heart is with Inter.

Creating a confident alpha presence, sitting surrounded by his trophies and with one arm splayed out on the sofa, he speaks initially about his current situation in a deep vocal tone that suggests low morale or regret as he tells the interviewer ‘I have to stick with it’.

His eyes drop to his left in an expression of what looks like reflective thought about his future and he first performs a wide measuring or evaluation hand gesture before shrugging about being unhappy.

His body language changes when he talks about Inter and his eyes turn to the camera to address the fans personally.

He becomes smiling and animated in contrast with his much slower and less happy tone when he speaks about ‘The boss’. 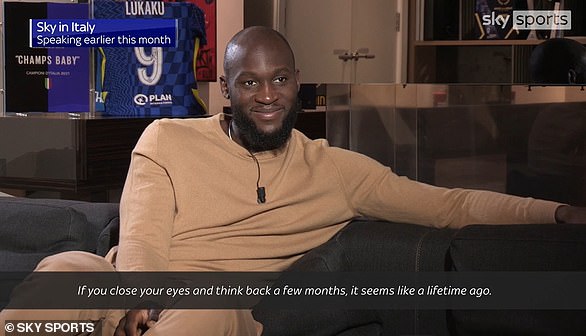