The start of pre-season is almost upon us and that can only mean one thing – the summer transfer window is well and truly in full swing. All around the country the elite teams are beginning to make their moves as they look to strengthen their squads and dispose of some of their deadwood ahead of the new Premier League campaign.

Arsenal have been one of the busier sides of late, securing deals to sign Brazilian youngster Marquinhos from Sao Paolo and Portuguese midfielder Fabio Vieira from Porto. They are not likely to stop there, however, and reports late on Tuesday night suggested they had made a first formal bid for Leeds star Raphinha. Watch this space.

Manchester United have not been quite so active, and are yet to bring in their first major signing, much to the frustration of their weary fans. A whole host of current and former Ajax players are being tipped to join and link back up with Erik ten Hag – Antony and Frenkie de Jong among them – but United need to get a move on if they don’t want to get left behind.

Chelsea could well bid farewell to Romelu Lukaku on Wednesday, with Inter Milan apparently agreeing a loan deal to re-sign their former striker and bring his Stamford Bridge hell to an end. And across London Tottenham may well do some more business in the near future, with the signings of Ivan Perisic, Fraser Forster and Yves Bissouma already in the bag.

And with the likes of Liverpool, Manchester City and Newcastle also expected to splash more cash before the end of the window, it’s fair to say there is plenty going on to keep an eye out for.

For all the latest updates throughout the day, stay tuned to the Express Sport transfer blog below.

Late on Tuesday night The Athletic reported that Arsenal had made a first formal offer for Leeds winger Raphinha, which is expected to be rejected.

But according to the same publication, the Gunners would not be the player’s priority in terms of a move.

The Brazilian is desperate to play in the Champions League, meaning that a switch to other suitors such as Barcelona or Chelsea would be preferable. 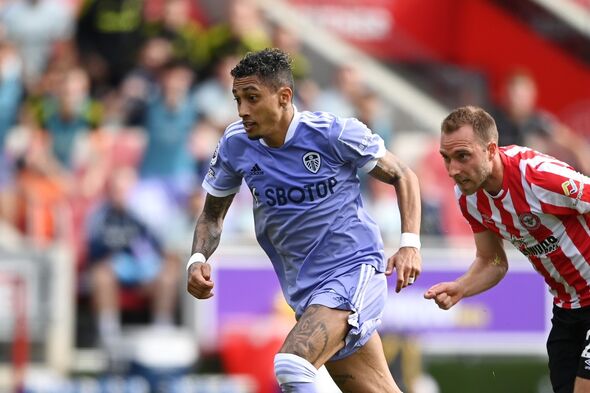 The Red Devils have been pursuing the likes of Frenkie de Jong, Antony and Jurrien Timber as they look to give Erik ten Hag a platform to achieve success.

But Spanish newspaper AS say Ronaldo isn’t happy at Old Trafford, with the veteran ‘worried’ by the club’s slow start to the summer.

The publication adds, too, that Ronaldo fears Erling Haaland and Darwin Nunez could take Manchester City and Liverpool to even greater heights.