There must have been times when Kasper Hjulmand wondered what he had done to deserve seeing so much misfortune on a football pitch. Perhaps during conversations with the psychologist who has been helping him make sense of the stresses and strains of recent weeks there will have been moments of quiet introspection.

The sight of Christian Eriksen dropping to the ground after a cardiac arrest during Denmark’s first game of Euro 2020 shocked everyone but, for the man plotting England’s downfall at Wembley on Wednesday night (Thursday morning AEST), it opened up old wounds and forced him to revisit a past already touched by tragedy and trauma.

Denmark’s manager Kasper Hjulmand speaks to his players after Christian Eriksen’s cardiac arrest during the game against Finland.Credit:AP

Hjulmand and his assistant with Denmark, the former Celtic midfielder Morten Wieghorst, were in charge of FC Nordsjaelland together when Jonathan Richter suffered a cardiac arrest after being struck by lightning during a brief thunderstorm while playing against Hvidovre in July 2009. Richter was placed in a medically induced coma and later had to have the lower part of his left leg amputated.

As if the ordeals with Richter and Eriksen were not bad enough, Hjulmand’s uncle died on a football pitch after suffering a heart attack.

Hjulmand has not been afraid to share his vulnerabilities and anxieties with his players and Denmark’s remarkable progress to the semi-finals has been underpinned by the humanity and dignity of their manager and the squad’s profound feelings of unity. There are certainly similarities between Denmark’s coach and England’s Gareth Southgate, another model of quiet, selfless leadership.

But Hjulmand admits he has had to lean on a psychologist and his staff to help him through, not least Wieghorst, who knows a thing or two about staring down adversity. In 2000, when at Celtic, Wieghorst was diagnosed with Guillain-Barre Syndrome, a very rare and serious nerve disorder that can weaken and even paralyse the body’s muscles. Remarkably, he was back playing 12 months later after intensive treatment and his presence in the Danish camp has provided a frequent source of reassurance. 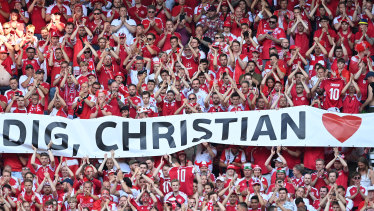 A tribute to Denmark’s Christian Eriksen, who collapsed during his country’s Euro 2020 opener against Finland.Credit:Getty Images

“I speak to the players freely about feelings and how I feel and I have a fantastic assistant coach in Morten Wieghorst,” Hjulmand explained. “I don’t know if you know his history but he had to fight his way back to life.

“We were coaching together when one of our players [Richter] was struck by lightning, nearly died and after two weeks of being in a coma he ended up living and is still here. So, we have experienced so much together.

“I have had a psychologist who has been helping me as well. I actually lost my uncle on a football pitch with a heart attack so, of course, my emotions have been outside myself.

“But we are one group and I’m just trying to be myself – don’t hide anything, try to find strength in ourselves and I think that’s the right way for me to lead: bring what I have and not think too much about strategy. I’m trying to be who I am.”

“We’ve been facing death in a way I hoped I never would. We almost lost our best player, our best friend.”

Had the Euros taken place when they were supposed to last summer, Hjulmand would not even have been in charge. He would have been in the stands or at home taking notes and waiting to replace Age Hareide. But Hjulmand has proved quite the figurehead and when he talks to his players about the importance of seizing the moment, you can understand where the motivation comes from.

He clears his own mind of “all the bad thoughts and feelings” by going for a swim at 7am every day and is fond of a bike ride and some exercise, but he thinks it may be a long time before he is able to fully digest the events of the past month.

“I don’t know if it’s the time of my life but it’s something where, in four weeks, you experience the emotions of a lifetime and try to be focused at the same time,” he said. “It’s been quite a journey and when I look back in 10, 15, 20 years I’ll say, ‘What happened? That was crazy’.

“We’ve been facing death in a way I hoped I never would. We almost lost our best player, our best friend, the heart of the team and fought with emotions like crazy. But right now I’m very focused on England and Wembley.”

Twenty-nine years after Denmark stunned the opposition to win Euro ’92, the country has a chance to write an extraordinary new chapter in its history. England have yet to concede in the tournament but Denmark have the experience of having beaten Southgate’s side 1-0 at Wembley in the Nations League last October and are not short of confidence after a stunning response to losing their opening two games to Finland and Belgium.

“They’re the favourites, but I’m just saying they have to be very good to beat us,” Hjulmand said.

Still, the respect for England and Southgate is obvious. “I think England are a great team and the FA with their strategy six or seven years ago changed the football in England,” Hjulmand said. “Gareth has done a fantastic job on this journey: their talent development, the number of young players coming through, the team spirit and the way they have been linked to the English population and created a new hope. I think it’s a great way of working.

“England have no weaknesses. But all teams have patterns, a way of working and, for me, there’s always space to pass the ball and attack. It’s just where it is and seeing if you can find it.”

Denmark will not be fuelled solely by the emotion around Eriksen, though.

They also have a good-luck charm – their coach’s black jumper, complete with a hole in the right armpit. Hjulmand wore it when Denmark won at Wembley last autumn and, having donned the garment in the second half of his country’s quarter-final win over Czech Republic on Saturday, he says it will be going with him to London.

“I wore it at Wembley for the 1-0 and then again against Russia and Wales and then I took it off but the players and everyone said, ‘You need to bring that jumper’,” Hjulmand said. “I’m not superstitious but probably I’ll take it to Wembley. We’ll see if I wear it but it will be with me.”