Meet the Titan of Tanzania: Ally Samatta is a national hero back home… now he wants to thrill the Aston Villa faithful at Wembley

When he was growing up, Ally Samatta thought he might become a soldier.

In the end, football offered him a different life. It took him away from his native Tanzania to Belgium and, as of January, to Aston Villa. 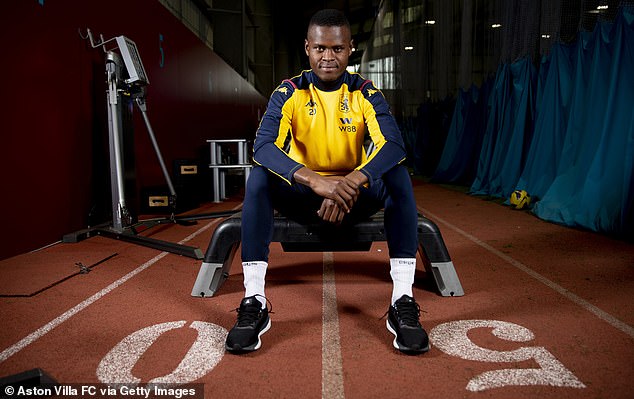 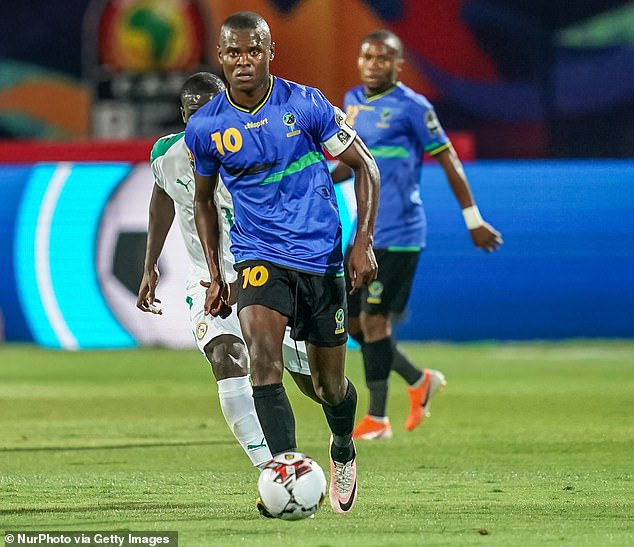 In Tanzania, Samatta is already a national hero but his life could have been very different

Samatta still has the chance to be someone, though. At 27, the centre forward is already a hero back home. On social media, his Villa team-mates have found their accounts inundated with demands from his supporters to pass the ball to him.

And on Sunday he will play for his new club against Manchester City at Wembley. For a young man who always wanted to make his mark on the world, the time could be now.

‘This is huge,’ he says. ‘It’s a final. At Wembley. Against City, which is a big club right now.

‘I haven’t even been to Wembley before. Now the club and some players are receiving a lot of messages. Maybe some team-mates don’t understand them because it’s in Swahili. But I just asked them to leave the players alone. You don’t have to message everybody! Let them concentrate. They don’t have to be crazy this much. They don’t have to text people they don’t know.’

The impact of Samatta’s Premier League move has been enormous in Tanzania. Supporters have gathered in public places to watch his first few games on big screens. It will be no different for tomorrow’s final.

Perhaps predictably, his impact at Villa has been a little more muted. Having scored 74 goals during his years at Genk, Samatta has found life tougher here.

He has scored once — a header in a defeat at Bournemouth — but had only 20 touches of the ball in last weekend’s 2-0 loss at Southampton and was replaced after an hour of his debut, Villa’s Carabao Cup semi-final, second-leg home win over Leicester. 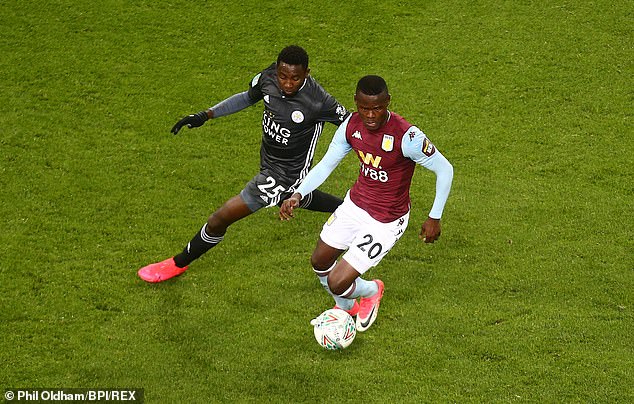 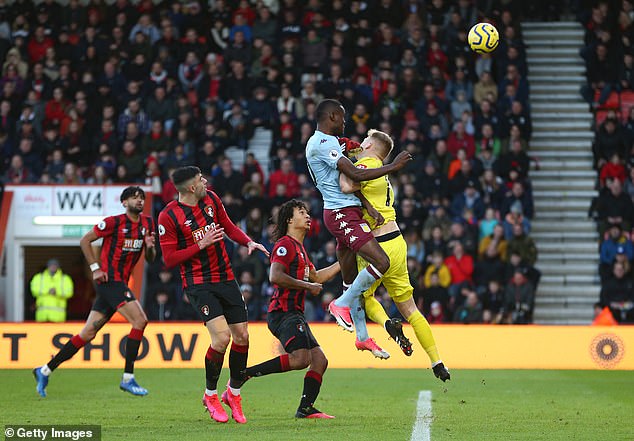 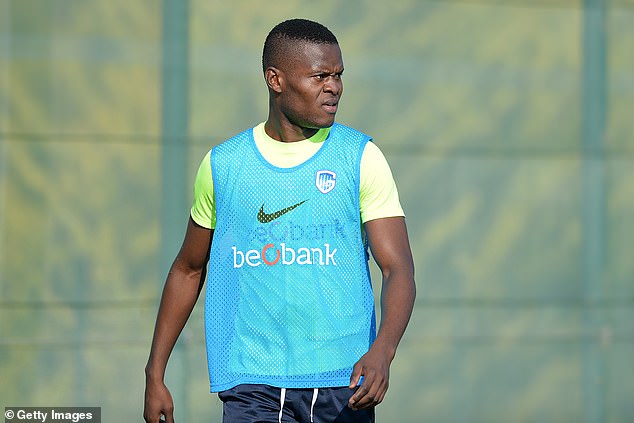 Samatta’s move to Villa from Genk was so quick, he only knew about it 48 hours beforehand 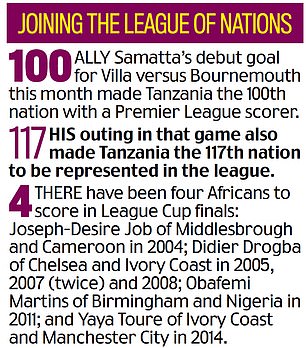 ‘When I went to Belgium I realised that in Africa it was a little bit easy,’ Samatta says. ‘In Belgium it’s aggressive. The defenders come at your legs kicking, pushing.

‘It’s not easy! In training they were running over me every time. I couldn’t get it. I was thinking, “Wow, this is tough”.

‘But I will make it. It’s not going to be easy. If training is like this, how is it going to be in the matches? So I have been trying to challenge my mental self. I need to be more than I was before.’

It sounds like a good attitude and one that has been appreciated at Villa, where manager Dean Smith has reassured him he will be given the time he needs to adjust.

Samatta only learned of his impending £8million transfer two days before it happened and has been plunged into a difficult environment, with Smith’s team just a point above the relegation zone having already lost 6-1 in the Premier League to tomorrow’s opponents.

But Samatta is unlikely to be fazed. Born and raised in Dar es Salaam, his early memories are of trying to develop his skills without a proper football. ‘As kids we always had some kind of ball but it was usually plastic bags that we used to make one,’ he says. ‘Then we’d go into the street and play. That’s where it started for me.’

‘I played something like two years in the second division and then a big company bought the club and started paying salaries,’ he says. ‘I started thinking it could be a serious career. It was just something like 40 or 50 pounds per month but I was thinking, “If you get a salary, that means it’s a real job. So I can do this. OK, let’s see where it takes me”.’ 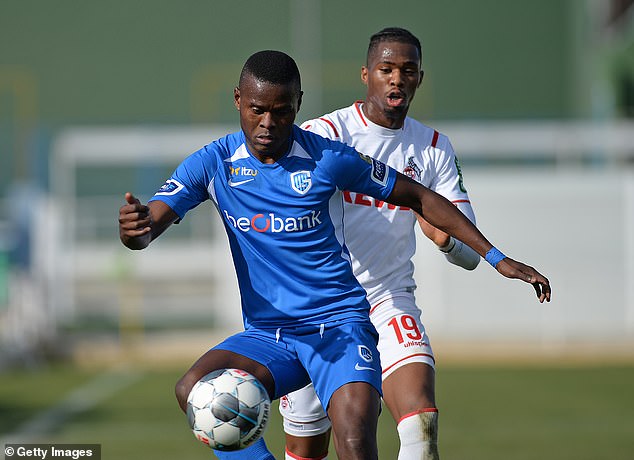 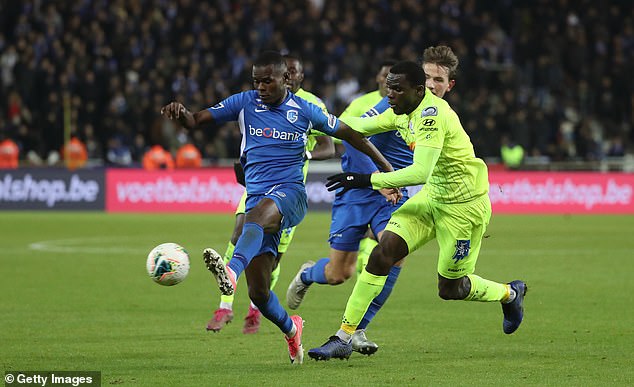 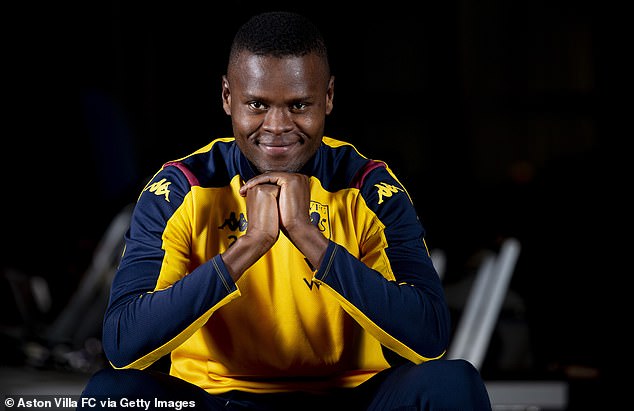 Now, Samatta is gearing up to visit Wembley for the first time in his life with his new team

Samatta turned fully professional in 2010 and made his name with the larger TP Mazembe club. Five years later he was named African-based Player of the Year as he finished the season as top scorer in his club’s triumphant African Champions League campaign, scoring a goal in both legs of the final.

In January 2016, he moved to Genk. ‘It was my dream to play in Europe but also it was very different,’ he recalls. ‘I went there in January — I never felt cold like that. In Africa when it’s 15 degrees you find a jacket. When I went to Belgium it was minus something!

‘I was very dead. But this was my dream and I had to adapt. I said to myself I have to improve a lot. I didn’t want to fail.’

Samatta thinks it took six months and a full pre-season to fully adjust to Belgian football. In England, he doesn’t have that time. Describing himself as a strong and quick player, he grew up admiring David Beckham, Cristiano Ronaldo and Thierry Henry. Then he modelled himself on former Chelsea forward Didier Drogba.

‘I tried to adapt and copy his running and stuff,’ he says. ‘But that was in the past. Then it was Harry Kane. I’ve watched him a lot. I like how he positions himself. And most of the time when he gets the ball he’s just thinking about shooting.’

And what about Sergio Aguero, who will lead City’s attack at Wembley? ‘Not so much,’ he says, bluntly. ‘I think he’s a good player, a fantastic striker. He scores a lot of goals but he’s not a player I really enjoy watching so much. 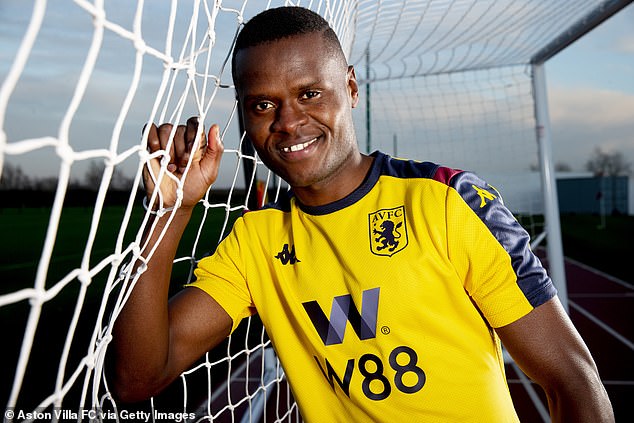 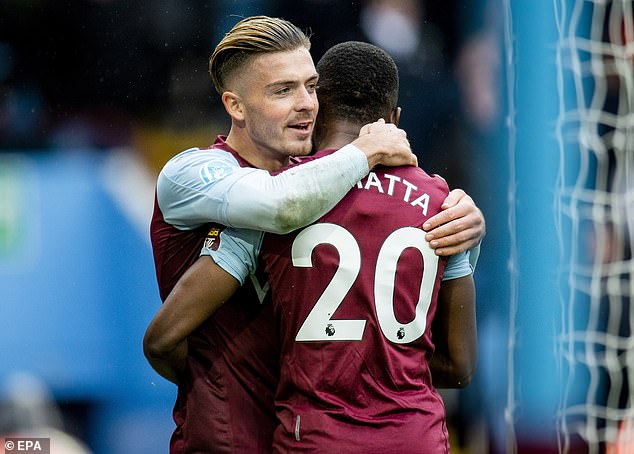 ‘For me. I have to improve everything. The speed, the physicality. It’s not just the speed of the ball, sometimes it’s just here [points to his head]. Thinking.’

Samatta will have about 10 family members at Wembley on Sunday. It will be one of the biggest days of his life. And at home — where money he raises is used to repair schools — they will watch in their millions.

‘If somebody is thinking of seeing new things and relax at the same time, maybe they will think about going to Tanzania,’ he smiles. ‘They will not regret it.’