‘With the young lad Parrott, I played a little bit with his head’: Tim Krul says mind games were to thank for his penalty heroics in Norwich’s FA Cup shootout win over Tottenham

Norwich goalkeeper Tim Krul has revealed the secrets of how he toppled Tottenham in the FA Cup and messed with the mind of teenager Troy Parrott.

Krul saved penalties from Parrott and Gedson Fernandes as Wednesday’s fifth round tie at White Hart Lane was settled in a shoot-out after a 1-1 draw.

Erik Lamela also missed as Spurs lost the psychological battle against a goalkeeper with a reputation as an expert amid the pressure of a shootout situation. 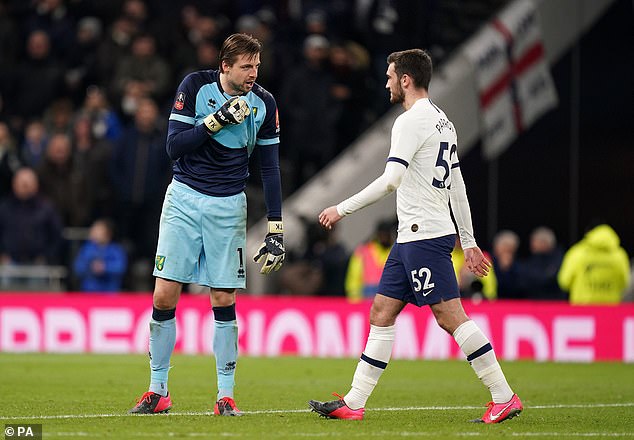 ‘I look at the player,’ said Krul. ‘Who is comfortable? Who is confident? With the young lad Parrott, I played a little bit with his head as well.

‘I just said: “I haven’t seen many penalties from you on my homework” and he was looking at me.

‘Actually, I hadn’t seen any of his penalties. This is when you have to forget everything and go back to what you’ve learned and from your experience.

‘Just wait on the line and react to the shot and that’s what I did for that one. It’s pressure for the player.’

Krul also felt a certain pressure to live up to his reputation after Eric Dier converted the first penalty for Spurs.

‘I was fuming with myself because I should have saved that,’ said the 31-year-old Norwich ‘keeper. ‘I was close to it. I was saying to myself: “Come on, you’ve got a name for saving penalties so you’d better start saving some”.

‘But the pressure was on them, in front of their own fans, it was huge for them. I play on that.’ 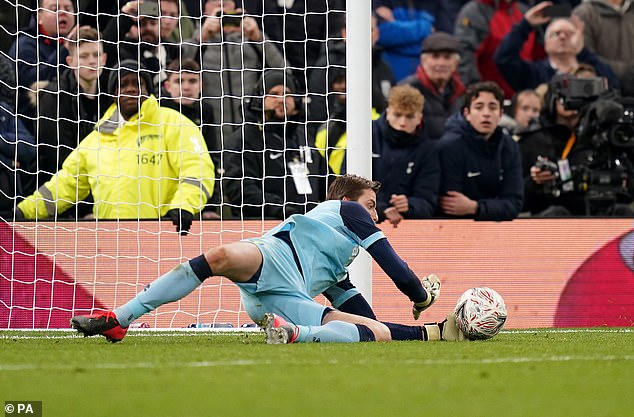 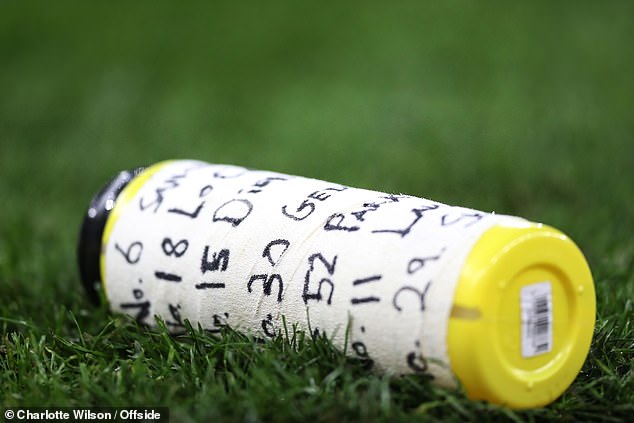 Krul had tips on the Tottenham players taped to his water bottle.

‘It’s down to hard work and homework as well,’ he said. ‘My goalie coach prepares me before every match and he gave me a bottle with all the details on.

‘But when the moment comes maybe it’s my experience. I’ve faced a few penalties in my career and I just see when one person is more nervous than another, who is more comfortable.

‘And of course in the end of course you need a little bit of luck as well. Like with Lamela, he changed from his normal side and luckily enough it went off the crossbar. Normally he goes the other way.’

His save to deny Gedson clinched Norwich a place in the FA Cup quarter-finals for the first time since 1992 and sprinted across the pitch to join the wild celebrations among 9,000 of their fans who made the journey to North London. 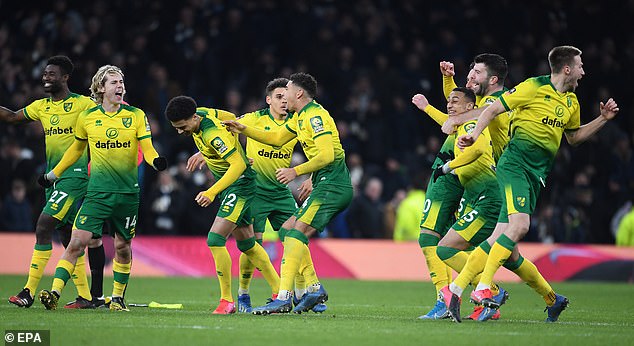 ‘Every emotion comes out when you make that run to the other side,’ said Krul. ‘I was fortunate enough to do that in Brazil in the World Cup and there was a moment in Holland with AZ in a semi-final of a cup.

‘It’s everything, from playing as a young boy to a stadium like that, that’s what you do it for. When the time is not as great and you’re working and then you have a night like that it just sums everything up.

‘It was a proper cup night and we dug in. Ben Godfrey’s clearance off the line was massive. And Grant Hanley’s blocks. Also our penalty takers, the confidence of Adam Idah and Todd Cantwell was unbelievable. I was really proud of them.

‘This is what it’s all about. Our fans deserve something to shout about and to have a home game in the quarter final of the FA Cup is an amazing fixture. I have every confidence in my team and it will be a special night at Carrow Road because the prize is Wembley and everybody will be up for that.

‘This week, hopefully, is the turning point.’