Chelsea boss Thomas Tuchel reportedly wants to make three key signings in the summer transfer window as he looks to build on his side’s Champions League triumph. The Blues are expected to challenge for the Premier League title next season after beating Manchester City to be crowned kings of Europe – and could spend big again.

Chelsea’s top priority is to sign a centre-forward, with Tuchel’s side having been linked with both Borussia Dortmund star Erling Haaland and wantaway Tottenham striker Harry Kane.

The Blues struggled for goals last season, despite finishing in the Premier League’s top four and winning the Champions League.

They have reportedly opened talks with Haaland’s representatives to establish the potential for a summer switch to Stamford Bridge.

And the 20-year-old could be a more viable option than Kane as the solution to Chelsea’s attacking issues.

Dortmund have insisted they will not sell Haaland this summer, but Chelsea are refusing to give up on signing him, according to The Telegraph.

The publication claims Tuchel’s side are exploring the possibility of making a £150million-plus bid for the Norway striker, with Manchester City the favourites to sign Kane if he leaves North London.

Tottenham chairman Daniel Levy would be unlikely to sanction the sale of Kane to his club’s London rivals.

But if City move for the England captain, that would effectively rule them out of the race for Haaland – with Chelsea poised to take advantage. 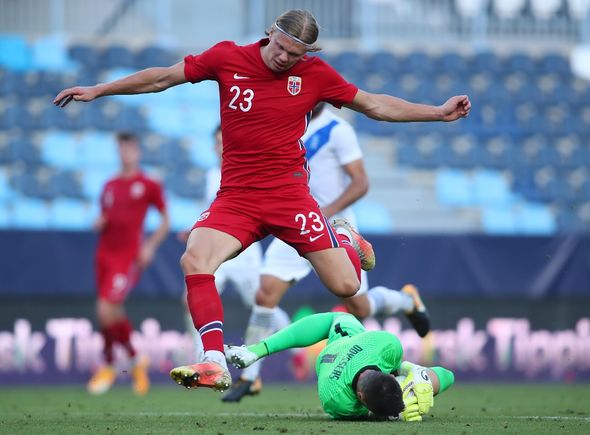 It is claimed that Chelsea will pursue a move for the 27-goal Bundesliga hitman if the noises from his camp indicate he would be interested.

And they could offer Tammy Abraham as a £40m makeweight, with Dortmund likely to want a replacement lined up before they would agree to sell.

The report claims that while signing a striker is Tuchel’s priority, he is also keen on West Ham star Declan Rice as he looks to enhance his defensive midfield options.

And the third area the manager wants to strengthen is the right side of attack. Chelsea have been linked with another Dortmund player in Jadon Sancho, although Manchester United are considered favourites to sign the winger.