Thiago in action against Manchester United

The only time the Premier League champions have been out of the top eight for possession in Europe during Jurgen Klopp’s tenure was across the 2015-16 campaign, with the German taking charge in October and spending his opening months laying down the foundations of counter-pressing and general organisation without the ball.

Liverpool’s transitions had spooked opposition, who reacted by defending deeper. And one of Klopp’s greatest challenges and subsequent successes at Anfield was ensuring the evolution from a blitz machine to a controlling unit, capable of winning in “500 different ways.”

Liverpool are very much a side that has the majority of the ball in nearly every fixture across all competitions and very much needed a passer with exceptional range using either feet as opponents looked to increasingly stifle the creativity of Trent Alexander-Arnold and Andy Roberston.

Klopp’s men would funnel the ball from the heart of defence out to the fullbacks, who would feed the front three. The midfield task of Fabinho, Jordan Henderson and Gini Wijnaldum were to chiefly be the steel: covering the advances of Alexander-Arnold and Robertson, preventing counters and recycling possession.

That Thiago’s skillset widely differs from those three is not a criticism, it is the whole point. Liverpool required variation in creativity, reducing the emphasis of building from the fullbacks and adding a progressive, pressure-resistant, world-class player to enhance their penetration from the centre of the pitch.

Liverpool’s threat from midfield was indirect and the presence of Thiago totally transforms that. As Klopp analysed: “He demands rhythm. He can obviously create and use space for other players, all these kinds of things.

“First touch incredible; vision incredible; passing pretty good! But is quick as well. Work-rate great. His numbers were absolutely special last year in Germany as well, most steals, ball recoveries and all these kinds of things; most passes.”

The intelligence and variety in Thiago’s play is outstanding beyond just the catalogue of passes. The way he can shift his balance or contort his body to create space for himself or disguise what he’s going to do with the ball has already been a highlight.

The 29-year-old is a line-breaker, resisting the option to play horizontally or backwards. He is also smart and disciplined with his positioning, so much so that Hansi Flick entrusted him to protect Bayern’s defence as they became European champions last season. 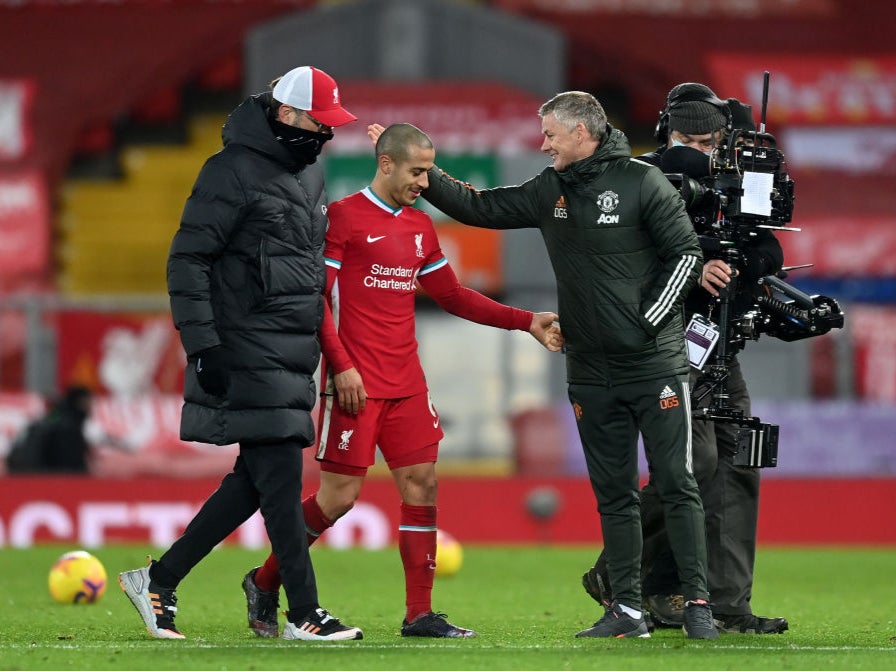 The accusation that Thiago slows the game or is not direct enough is in complete contradiction to the reality of his performances for Liverpool, where barring the defeat at Southampton, he has been the best player on the park.

Protecting the defence, linking the play, switching it and creating chances have all been boxed.

Complaining about Thiago’s touches – a game high 122 – against United when the hosts had 65.8 per cent of the ball is also bewildering.

Was the deep-lying playmaker, who made the most passes in the opposition half, not meant to take control?

He was operating in a different realm to everyone else at Anfield, backed up by the stats, but more importantly the eyes. Liverpool’s first-half dominance against United was largely designed by Thiago and the failure to get a goal was down to the front three’s desperation to score, snatching at everything instead of being composed with the decisive 10 per cent in the final third.

The offensive dip of the champions is owed to multiple reasons, not least the struggle of the entire system to work effectively without the build-up play at the back from the injured senior centre-halves and the psychological impact of that as well as the unavailability of the in-form Diogo Jota.

It is not certainly not on Thiago, who is their greatest tool at the moment to try and remedy their balance.

The only mark against the midfielder is through no fault of his own. His starts have been limited to three due to testing positive for Covid and a serious knee problem picked up in October’s Merseyside derby.

When Thiago plays, it is a masterclass in the art of football and a true understanding of how each pass, each decision can alter its flow.

Those who can’t see it are poorer for it.