The biggest Scottish Cup shock EVER! Sixth tier Darvel pull off spectacular giantkilling as they beat Premiership side Aberdeen 1-0 in the fourth round, despite sitting 56 places below them in the Scots football ladder

There is no need to thumb through the record books or open the matter up for debate.

At a stroke last night, Darvel recorded the biggest upset since the first of 149 editions of the Scottish Cup was staged in 1873-74.

For all the likes of Berwick Rangers and Inverness had previously sent shockwaves through the game with their acts of giant-killing, none compared with this; a team in the sixth tier felling a side from the top division.

Fully 56 places below the Dons on Scottish football’s ladder, little Darvel are plankton in the game. They shouldn’t have stood a chance yet they richly deserved a victory that will genuinely raise eyebrows across the globe.

The performance of every one of Mick Kennedy’s players was remarkable. The headlines were made by Jordan Kirkpatrick, the scorer of the decisive goal in the first half, but the minnows were to a man magnificent.

Their prize is a home draw with Falkirk in the fifth round. It may be some time before anyone involved will be able to focus on that.

For Aberdeen, this spells the end for Jim Goodwin. The statistics pertaining to the Dons manager — a 13th defeat of the season, just one win since the World Cup — are now largely irrelevant. 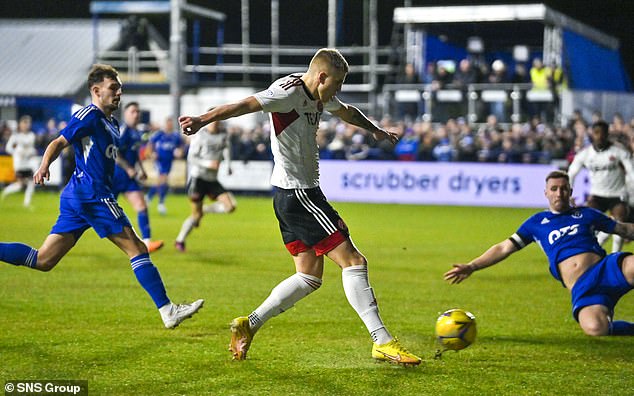 They knocked out Premiership side Aderdeen, who have won the Cup seven times

No manager survives results like these. Chairman Dave Cormack made the trip to Ayrshire last night and his look at full-time said it all. It’s inconceivable that the Irishman will take charge of the side against Hibs this weekend. No matter what he goes on to do in management, this is a night Goodwin will never forget. For Aberdeen as a club, it’s a desperate low. Shamefully, the players looked well beaten long before the end.

Darvel had made it to the fourth round as recently as last year only to be blown away by Arbroath at Gayfield. Everything about this felt like the biggest game in the club’s 134-year-history, though. The sight of television cameras being unloaded from trucks heightened the sense of anticipation in the Ayrshire town.

This game had been deemed worthy of a wider audience through its potential to deliver a monumental upset, though few probably believed it possible. 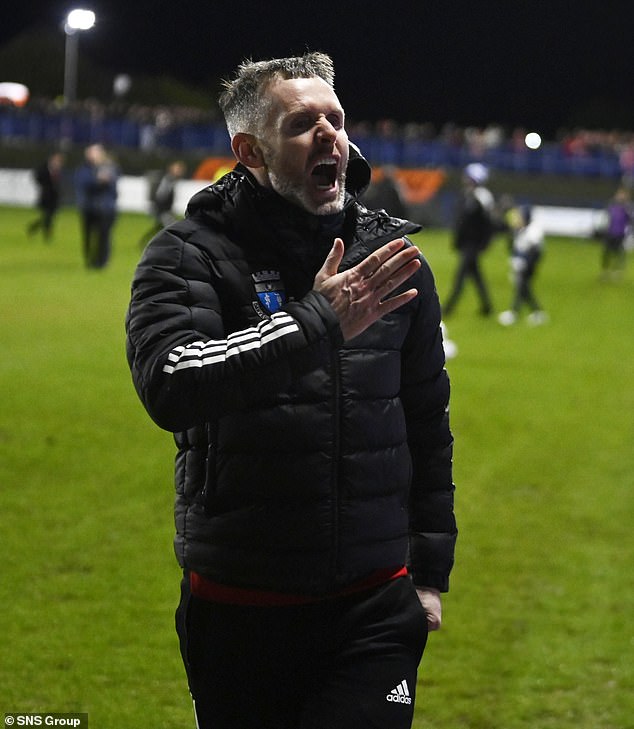 You had to hand it to the West of Scotland League leaders. With the capacity at Recreation Park just a few thousand, it would have been easier to switch the game to the likes of Rugby Park and rake in some much-needed extra cash.

By keeping it on their own soil, their commitment to being a community club was beyond question.

Decked out in blue and white, more than half of the town’s 4,000 residents crammed into the ground in the hope of seeing history made. Even with a reduced allocation, there were still around 1,000 Aberdeen fans present. It was everything that’s magical about this stage of the competition.

If the recent travails of Goodwin’s side had given Darvel another reason to dream, there were no shortage of reminders as to the scale of the task that awaited. Play as they could and Aberdeen should have had no fears. Easier said than done, as it transpired.

A cursory glance at Darvel’s squad pointed to its capacity to cause trouble here. Ross Caldwell, Daryll Meggatt and Ian McShane. Familiar names with experience at higher levels. They would not be daunted by this challenge. 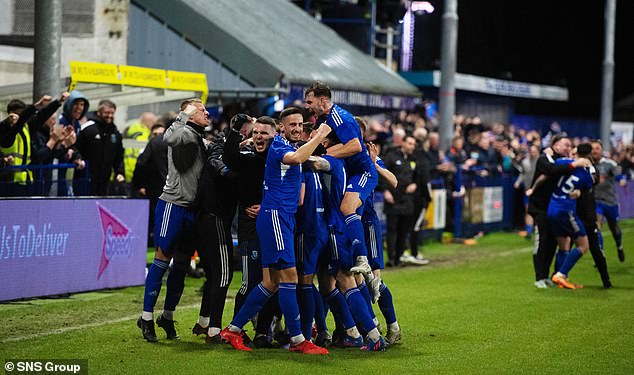 It was the kind of night Goodwin would have relished as a player but it was legitimate to question how his players viewed it. In the manager’s words, they’d been ‘abysmal’ just along the road at Kilmarnock over Christmas and ‘pathetic’ at Tynecastle last week.

With supporters’ trust in the side fast evaporating, this had all the hallmarks of a difficult night.

There was a first start for Patrik Myslovic but no place in the side for Bojan Miovski. With Kelle Roos injured, Joe Lewis remained in goal, with coach Craig Samson having to take a place on the bench.

On a pristine playing surface, the minnows immediately served notice they were prepared to go toe-to-toe with the men from the north-east.

Aberdeen eventually settled, with Ryan Duncan feeding Duk. Eight yards out, the striker got his feet in a terrible tangle and the chance was gone. 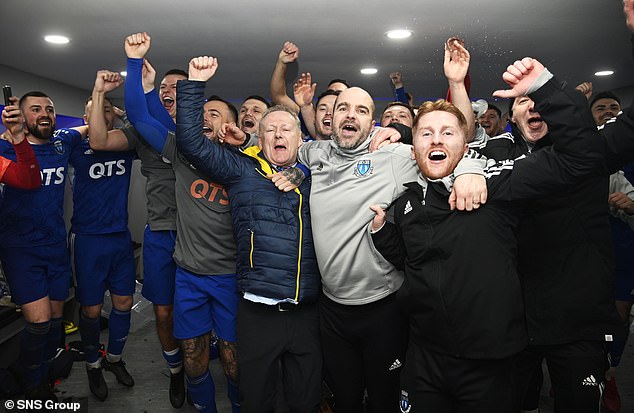 Duncan was one of the few in white to start positively. Running onto Leighton Clarkson’s incisive pass, he let fly but couldn’t steer his shot the right side of the post.

Within seconds, the teenager dropped a shoulder to make a yard of space. His curling effort was clever but wide.

Darvel were impressive on the back foot and rapidly turned defence into attack. In Craig Truesdale, Kennedy had a player who was willing to shoot on sight. He had three efforts in the opening exchanges, all of which worried Lewis.

You could not say the opener was ill-deserved. Truesdale motored down the left. Ylber Ramadani’s attempt to stop him was pitiful. The cross was only half-cleared by Hayden Coulson. When it made its way back to Kirkpatrick via Willie Robertson, he only had one thing on his mind. Lewis may have been beaten in any event but a deflection off Coulson did for him. Three-quarters of the ground erupted in wild celebration. 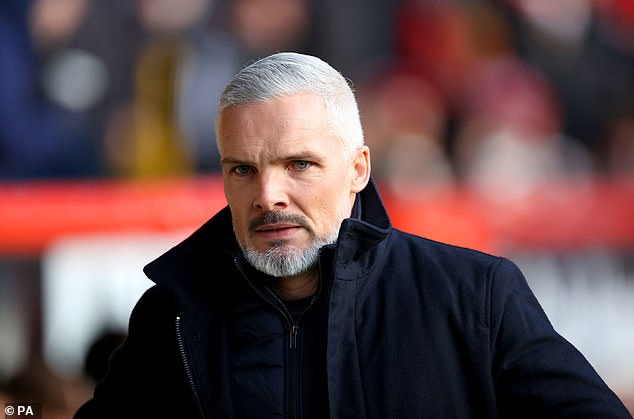 Goodwin could only look on in horror as the player, who he’d had at Alloa, was smothered under a pile of bodies.

Passive, slow and predictable, Aberdeen were sleepwalking towards the most ignominious defeat in their 120-year history. A blocked Ramadani shot was all they could muster by way of a response before the break.

There was only one side playing football in the first period and it wasn’t the heavy favourites.

Goodwin threw on Miovski and Vicente Besuijen at the break and Jonny Hayes soon after. There was a little more about them although that wasn’t difficult.

It took 56 minutes for Darvel keeper Chris Truesdale to make a save when he denied Duncan a tap-in. McShane had just come close to getting Darvel’s second with a fizzing strike from 25 yards. 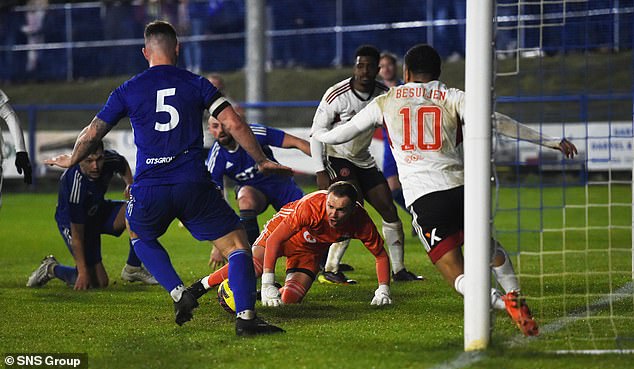 More then half of Darvel’s 4,000 residents turned up to watch the famous win

The harder Aberdeen tried, the more muddled their thinking became. Hayes did succeed in causing panic in Darvel’s defence with a dart and a cross but Besuijen couldn’t supply the finish.

Miovski had the ball in the net only to find Clarkson had been flagged offside. It was a desperately poor call by the linesman.

The final stages were virtually a game of attack against defence. Aberdeen asked more questions but found Darvel had all the answers.

When the final whistle sounded, the roar of the home fans would have been heard throughout Ayrshire. It was going to be the longest of nights in the lang toon. For Aberdeen, the fall-out will be nuclear.