Greater Western Sydney's reigning best-and-fairest winner Tim Taranto could be facing a long spell on the sidelines after injuring his shoulder just 10 minutes into the club's Marsh Series pre-season campaign on Saturday.

In a horror start to their 94-point mauling of the Sydney Swans, Taranto's right shoulder – which was already heavily strapped – dislocated from its socket as he reached for the ball in a stock-standard contest, and the look on his face immediately suggested he knew he was in strife.

Tim Taranto was all smiles at quarter-time, but the Giants face an anxious wait to learn how bad his shoulder injury is.Credit:Getty Images

The 22-year-old didn't return, spending the rest of the afternoon with ice on his shoulder, and will be sent for scans in the coming days to determine the extent of the damage. The Giants will be praying surgery isn't required.

"He's obviously a bit flat about it at the moment but we'll look after him over the next few days and hopefully we get some good news on that. It slipped out and went back in, which is a good thing, I think." 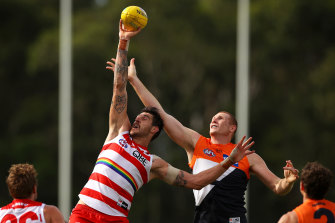 Both the Swans and Giants had fresh faces in the ruck – Sam Naismith (left), who didn’t play a game in 2019, and Sam Jacobs, who joined GWS from Adelaide in the trade period.Credit:Getty Images

Taranto enjoyed a break-out season last year, playing every game as the Giants reached their grand final and averaging 27 disposals and five clearances on his way to the Kevin Sheedy Medal.

It would be an immense blow if he were to miss an extended period – although perhaps no other club in the AFL is as equipped to deal with the loss of a top-line midfielder than GWS, who had an embarrassment of riches sitting in the stands at the Blacktown International Sports Park and still did it easy against their cross-town rivals, who scored only one goal after quarter-time.

Eight of their best players didn't take part in Saturday's clash – new skipper Stephen Coniglio, Coleman medallist Jeremy Cameron, Lachie Whitfield, Josh Kelly, Toby Greene and Nick Haynes had all played in the State of Origin for bushfire relief match in Melbourne the night before, while Zac Williams and Callan Ward are recovering from injuries.

That simply provided an opportunity for their next rung of players to step up, and the results were stunning. Academy product Tom Green, in his first competitive outing, suggested he will add to Leon Cameron's selection headaches this season with 21 touches, six clearances and two goals, as did second-year midfielder Jackson Hately (25 disposals, eight clearances, one goal).

Zac Langdon, who played only three games in 2019 because of foot and ankle injuries, also grasped his opportunity, kicking three of his five majors in a 10-minute burst as GWS took control of proceedings with a six-goal second term. They would pile on 15 unanswered goals until Will Hayward broke Sydney's 2½-quarter drought with only six minutes left to play.

If this was any real indication of what is to come – and as always at this time of year, that's up for debate – then the Swans might be in for another long year. They barely gave a whimper after the first term as the contest devolved into a glorified GWS training run.

"There's not much to take out of it," said Swans assistant coach Brett Kirk.

"Unacceptable performance, well below the standard we set for our footy club.

"Whether it's a pre-season game or a grand final, there's some non-negotiables in footy and we just didn't get it done today.

"The positive is, if you're looking for a positive, there's a couple of weeks until round one. We've got to have a good, hard look at how we performed and then learn from it."

Granted, Sydney were also missing some key players – Tom Papley, Callum Mills and Jake Lloyd also played in the Origin game, while Lance Franklin, Isaac Heeney and Sam Reid are among those injured. But even if they all played, it felt as if there still would have been a fair gap between these two sides.

There are a couple of green shoots for the Swans to be excited about, though, such as draftee defender Will Gould, who announced his arrival with a brutal bump on stand-in Giants skipper Matt de Boer in the opening minutes.