Sweden winger Emil Forsberg scored a double including the second fastest strike in European Championship history before Viktor Claesson’s stoppage-time goal helped them seal a 3-2 win over Poland on Wednesday and top Group E heading into the last-16.

Sweden will next face one of the third-placed sides from Groups B, C or D – Finland, Ukraine or the Czech Republic – in Glasgow on June 29.

Spain, who finished second following their 5-0 win over Slovakia in the other Group E match, face Croatia in Copenhagen a day earlier.

It was a heartbreaking end to Poland’s campaign after they twice drew level through talismanic skipper Robert Lewandowski, whose 84th minute equaliser for 2-2 gave them a glimmer of hope.

Sweden’s previous two matches were built on robust defensive displays that had cast doubts on whether Janne Andersson’s side could get their attack firing, but they made a blistering start through the lively Forsberg.

After Robin Quaison controlled the ball on the edge of the penalty area, Forsberg collected a pass and took advantage of some poor defending to fire past goalkeeper Wojciech Szczesny with 82 seconds on the clock.

He doubled their lead with a powerful drive for his third goal of the tournament after substitute Dejan Kulusevski weaved his way into the box to lay it on a platter in the 59th minute.

Lewandowski pulled a goal back two minutes later with a curling shot before Jakub Swierczok’s tap-in from substitute Przemyslaw Frankowski’s pass was ruled out for offside after the Video Assiatant Referee’s intervention. 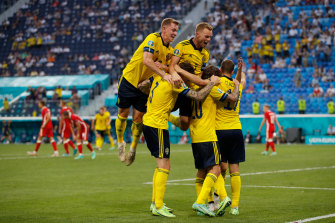 Lewandowski, who missed chances to make it 1-1 in the first half after rising above Sweden’s defence only to thunder two headers onto the crossbar, fired in the equaliser from close range after a pass from Frankowski.

But Sweden were not done yet, as Kulusevski slipped the ball to Claesson who slotted past Szczesny to secure the win.

“It was a rollercoaster emotionally. It was 2-0 and as calm as it could be, then they got back into the game and got two goals,” Claesson told Sweden’s TV4.

“From 2-1, there’s always pressure there. It’s hard to do anything but defend in those situations when they have that kind of momentum. We’ll hopefully get a slightly easier opponent in the last 16.”

Meantime, Spain crushed a hapless Slovakia 5-0 in their first Euro 2020 win on Wednesday, setting up a last-16 clash against Croatia, after being set on their way by a calamitous own-goal from keeper Martin Dubravka.

Aymeric Laporte headed in a second goal on the stroke of halftime before second-half goals from Pablo Sarabia, Ferran Torres and a Juraj Kucka own goal rounded off an emphatic win that saw them finish second in Group E on five points behind Sweden. 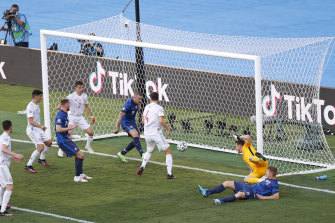 Luis Enrique’s side will next meet Croatia in Copenhagen on Monday while Slovakia head home.

Dubravka had made a stunning save to keep out an Alvaro Morata penalty but gave Spain the lead on the half-hour mark when he palmed the ball into his own net after a Sarabia shot had cannoned off the crossbar and looped back towards goal.

The goal, which came about after a misplaced pass from Slovakia’s shaky defence, eased any nerves Spain had of a shock exit after disappointing draws with Sweden and Poland, and they went on to record the biggest win of the tournament.

“This was just what we needed. We came flying out of the blocks, and when we play like that we’re a very strong side,” said Spain captain Sergio Busquets, who missed the first two games following a COVID-19 positive test.

“Today was a huge boost for everyone, for the players, the fans. I’ve had a really bad time, 10 days at home without knowing if I could return. But now whatever will be will be.”