Scottish football entered a bold new era after VAR made its debut in the clash between Hibs and St Johnstone at Easter Road on Friday night.

It was a positive start for the new technology, with the game passing off without any major controversy. On-field referee Kevin Clancy was aided by VAR Willie Collum and, between them, they got all of the major decisions correct.

There were no major delays or drama, as some had feared, on a historic night for Scottish football as St Johnstone came from behind to triumph 2-1 thanks to goals from Nicky Clark and Stevie May.

VAR checked all three goals — including Hibs’ opener from Mykola Kukharevych — and on each occasion, a decision was reached in swift fashion.

The technology was used for the first time in the seventh minute when Hibs striker Martin Boyle took a tumble in the box. Clancy’s initial decision was to book Boyle for diving — and Collum swiftly ratified the decision after a quick check.

Hibs midfielder Kyle Magennis was sent off on 70 minutes, but VAR did not intervene due to the fact it was a second booking. VAR can only intervene on four fronts — straight red cards, penalty decisions, goals and any case of mistaken identity.

With two minutes left, Hibs forward Jair Tavares was flagged for offside but, before play was brought to a halt, Boyle was wiped out in the box by a Saints defender. Clancy waited while a VAR check took place, with the tight offside approved by Collum and his team. 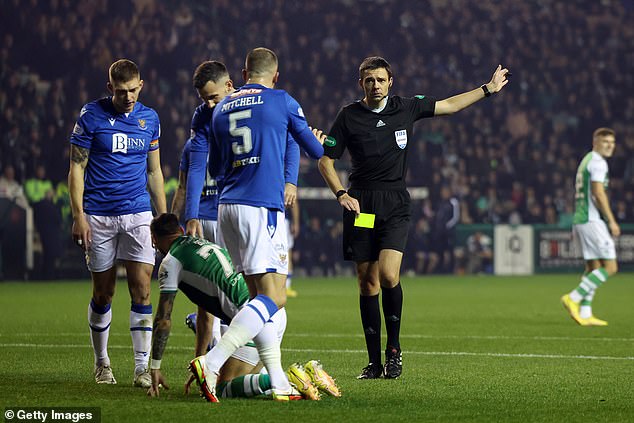 Hibs manager Lee Johnson reluctantly gave VAR the thumbs up despite claims of a foul in the build-up to Clark’s equaliser for St Johnstone.

The Leith side had deservedly taken the lead through Kukharevych ten minutes before the break but passed up chances to move out of sight.

Magennis’ sending off for two bookings swung the game back in Saints’ favour. Clark levelled three minutes later when he headed in Melker Hallberg’s corner — a goal that stood despite Ryan Porteous’ protests over a shove in the back.

Johnson admitted he could have no complaints with how VAR was deployed. He said: ‘For their first one, Porto (Porteous) is convinced he took one in the back.

‘He does take one in the back. There’s no doubt in that, but even with bias, it looks a little bit soft to be giving us a foul. 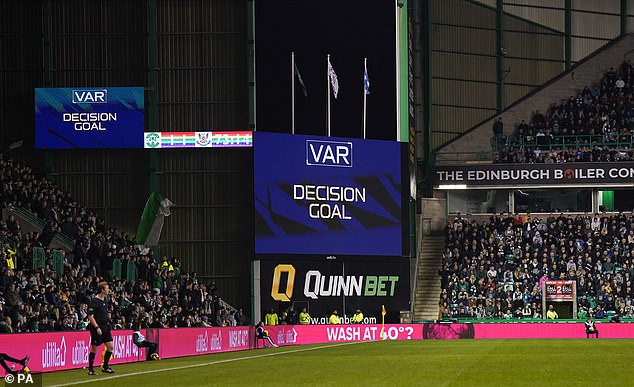 VAR checked all three goals and on each occasion, a decision was reached in swift fashion

‘It is difficult because how do we really know how much force went into that? There are two hands in the lower back but it doesn’t look like enough force for VAR to change the decision, which is clearly what happened.

‘I thought VAR was all right. I suppose you are looking for that justice. I don’t think we were at the mercy of any teething problems. It seemed okay.

‘I didn’t like the check when we scored. You still have that anxious couple of minutes. Well, it feels like a couple of minutes’ wait. But they got the decision right. I think, overall for a first game, you have to give credit to the officials both here and in Glasgow in the office.’

On his team’s display, Johnson was less complimentary, adding: ‘It’s a hard one to take. Games last 96 minutes and you have to make good decisions for 96 minutes.

‘We made very good decisions in the first half and we were the dominant side. We got our spirit of attack and press back.

‘Where we fall short on too many occasions is that final ball. 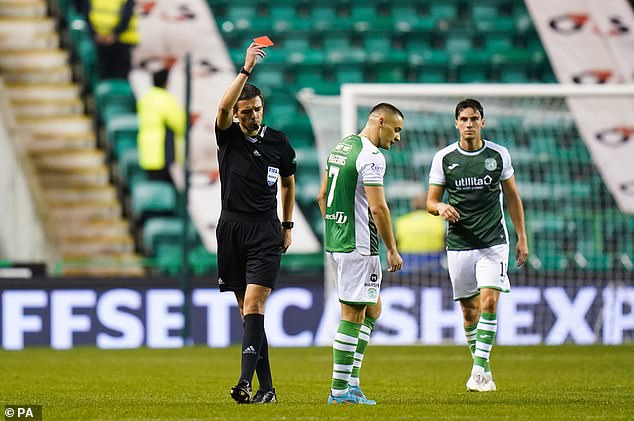 ‘I remember seven or eight where one well-executed pass leads to a simple chance. Inevitably, that will make the difference to where we finish this season.’

Saints manager Callum Davidson, whose team are now four points ahead of Kilmarnock, Dundee United and Ross County at the foot of the Premiership table, admitted he saw a reaction from his team after delivering the hairdryer treatment at half-time following a dismal first-half showing.

He said: ‘First half was as angry as I’ve been since I’ve been in charge. I maybe should shout at them more often. I don’t really want to.

‘I don’t accept the first-half performance levels, more attitude than anything else. We were really poor and I asked for a reaction.

‘The substitutions and the sending- off helped. We controlled the game well and I’m absolutely delighted to get the three points for that great travelling support.

‘I certainly got the reaction I wanted. It was great to see both my strikers score after we went two up front in the second half. We showed the desire to win tackles, win headers, press, keep the ball. Everything, really. I could go on.

‘This is a very hard place to come. It’s sometimes difficult when you’re playing against ten men as well.’