Southampton 1-2 Watford: Relegation-threatened Hornets hold on to a huge three away from home thanks to Cucho Hernandez’s brace

Football’s self-deprecating humour was on full show in the Watford end amid a very big win.

‘We’re fucking s***,’ their supporters sang when it was 0-0. ‘How s*** must you be? We’re winning away,’ when Cucho Hernandez made it 1-0. ‘Are you Watford in disguise?’ when Southampton’s Che Adams messed up a simple pass. ‘We’re going down,’ they added.

And yet, after this, maybe they aren’t. Watford have hope. Their fans know the predicament they’re in and so they had fun with it in Southampton, but this was a potentially season-spinning win.

They’re still in the Premier League’s bottom three but they’re level on points with Everton and Leeds United aren’t too far away. It’s game on for Roy Hodgson’s Hornets.

Defeat would have been a disaster. But they now have their second win under Hodgson, who joined in January with a simple directive from the Pozzo family to ‘keep us up’.

Hernandez’s two goals gave them the win here, while Southampton’s players look like they’ve got their flip flops on in the Premier League. They started the day in 10th. They won’t be making it into Europe via the table and they won’t be dropping down into the Championship.

The highlight of their season will be the FA Cup quarter final against Manchester City at this stadium next weekend. You hope they aren’t as soft as they were here, otherwise that could get embarrassing. 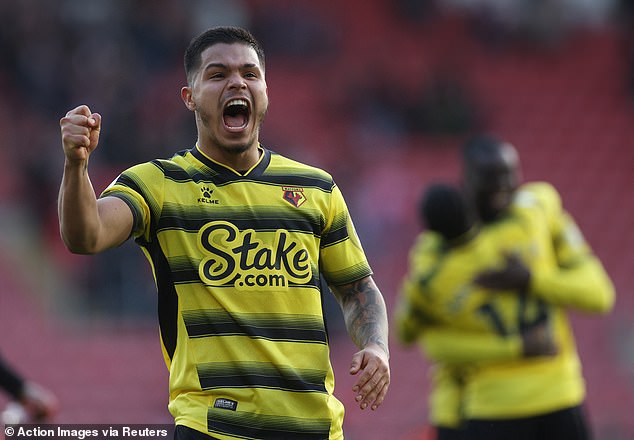 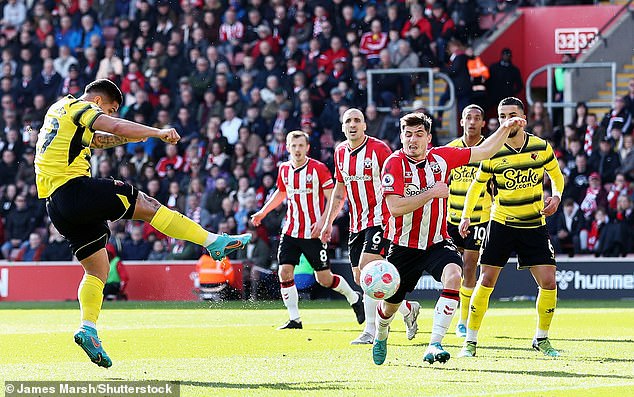 Southampton would have led within two minutes were it not for Watford’s Samir positioning himself on the line as Stuart Armstrong’s cross came in. Mohamed Elyounoussi headed for goal and it was going in until Samir’s clearance.

Instead it was Watford who led after 14 minutes, and oh how Southampton created a calamity for themselves.

Fraser Forster had played a pass to Jan Bednarek that was almost intercepted by Emmanuel Dennis. Phew, thought Ralph Hasenhuttl. However, his side then stitched themselves up further.

Bednarek found Mohammed Salisu, whose subsequent back pass was too short for Forster. Hernandez charged in, won the ball and defied the awkward angle to score.

Southampton had chances to equalise before the half-hour mark. When James Ward-Prowse was standing over a free-kick to the right of Watford’s box, you knew the delivery would be a good one.

It was, and Salisu should have made amends for his earlier error by heading beyond Ben Foster. 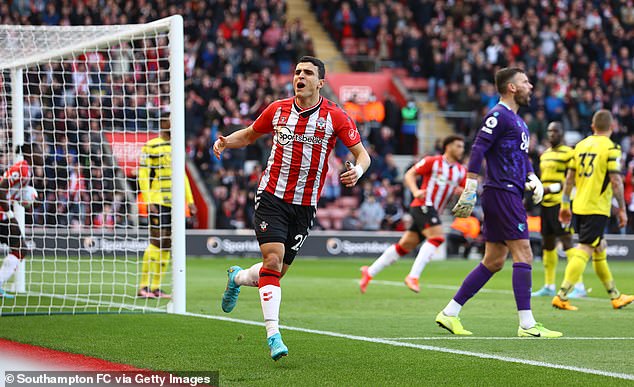 It got worse for Southampton when a Watford counter-attack made it 2-0. How simple it was, too. A cross from Juraj Kucka, and a volley from an unmarked Hernandez beyond Forster.

It should have been 3-0 after 41 minutes. Moussa Sissoko played a pass in behind Bednarek, who suddenly realised Kucka was there. Forster saved with his legs.

That was a big moment because before half time, it was 2-1. Another set piece was whipped in by Ward-Prowse. Adams headed it on and Elyounoussi volleyed in at the back post. The defending was awful as all those in yellow looked around wondering who was supposed to be marking who.

Southampton had hope, but a select few supporters booed off the team at the break.

A very big second half awaited Watford and there was a change in shape from Southampton with midfielder Oriol Romeu dropping to form a back three. That allowed Kyle Walker-Peters and Romain Perraud to push up.

Yet the game was scrappy and it was Watford who came closest to scoring the next goal as we reached the 80-minute mark. Kucka’s curler needed saving by Forster, Hernandez’s chance of a hat-trick was blasted over the crossbar and Dennis’s effort was dragged wide.

In the 85th minute, Hassane Kamara barged into the back of Adams, and Southampton had a free-kick right on the edge of the box. Step up Ward-Prowse, the dead-ball specialist.

Watford’s players were being mischievous with Sissoko shown a yellow. It was perhaps a way of distracting Southampton’s skipper – like how opponents try to put off a penalty taker. Ward-Prowse stepped up and the ball landed on the top of Foster’s net.

That was the cue for a wave of Southampton supporters to make their way to the exits.

Those who left missed a penalty shout. Bednarek had headed for goal but it was stopped by Christian Kabasele, whose arm was up in the air. Surprisingly, VAR Peter Bankes did not recommend a visitor to his pitch-side monitor for referee Graham Scott.

Hasenhuttl was amazed by that, as the Southampton supporters would be when watching it back on Match of the Day 2. It wasn’t their day, but it was Watford’s.