Son Heung-min is hoping to continue his “special” partnership with Harry Kane at Tottenham despite speculation linking the striker with a move to Bayern Munich. The England international has emerged as a target for the Bavarian giants after receiving praise from head coach Julian Nagelsmann.

Spurs managed to finish in the top four last season under Antonio Conte and their progress into the top four owed much to the goalscoring exploits of Son and Kane. The former found the net 23 times on his way to securing his first Golden Boot in the Premier League, while Kane chipped in with 17 goals and nine assists to cap an influential campaign as Spurs’ talisman.

The pair have formed a devastating duo thanks to their almost telepathic understanding and Son has opened up on his relationship with Kane, revealing the pair are as close off the pitch as they are lethal on it.

“I saw Kane’s interview where he said that he spends more time with me than his wife,” Son said, speaking to GQ Korea. “That’s really the fact though. I also spend more time on the field with Kane than I do with my parents at home.

“We are really close. We understand each other really well, and we also know how the other is off the pitch. Kane and I both know what the other likes. It’s really special.”

Son and Kane’s partnership up front is officially the most prolific in Premier League history with 41 goals combined for each other, having also created the highest number of goals between two players in a single English top-flight season.

But there have been questions as to whether Kane could depart this summer after Bayern boss Nagelsmann publicly declared his interest in signing the 28-year-old as a long-term replacement for Robert Lewandowski, who joined Barcelona earlier this month. Those comments angered Conte in particular, with the Italian snapping back at his counterpart. 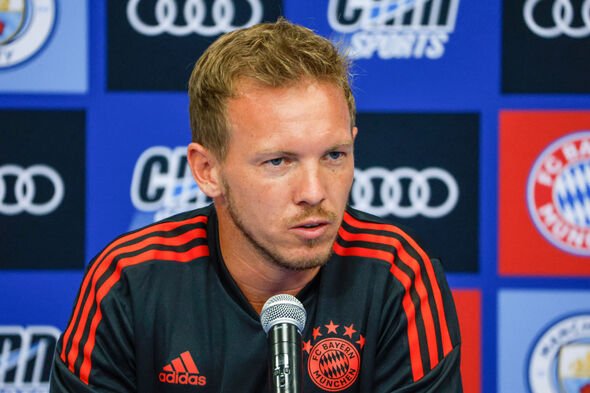 “Very strong, brilliant with his head, it could be possible that he could score a lot of goals in the Bundesliga,” he told reporters. “But it will be tough for Bayern Munich [to sign Kane], we will see what will happen in the future.”

However, Son is hoping that he and Kane will extend their successful record-breaking run together for years to come and believes they share the same passion for scoring goals, which can help them improve their respective tallies next season.

“We have already made 41 goals together,” he added. “What Kane and I really have in common is that we both have a lot of greed and have the strong will to always improve. Even beyond football skills, our mindsets are similar.”

“I want to continue the record that I have set with a team-mate like this, although our record will be broken one day. Even when we’re training, if one of us makes an assist for the other’s goal, we joke around saying, ‘Hey, it’s our 42nd goal now?’”

Having scored eight goals between them in pre-season, Kane and Son are expected to line up together once more as Conte’s men travel to Southampton on the opening day of the season on August 6.