Manchester United boss Ole Gunnar Solskjaer refused to comment on the club’s reported interest in Jude Bellingham. Bellingham has been impressive at Birmingham as he has made a total of 38 appearances across all competitions this season despite his young age of 17.

United have been linked with the midfielder but Solskjaer opted against addressing any kind of transfer speculation regarding potential targets.

The Red Devils boss said: “I think there’s been loads of speculation linking us to every single talented player from age of 15 to 25, I can’t comment on every single player that’s been linked with us, I can’t really comment.”

Solskjaer has been focusing a lot on youth ever since taking over at the helm in 2018 as he has been giving plenty of opportunities to up-and-coming talent like Mason Greenwood.

Greenwood is leaving immense promise for the future as he has already amassed six goals in the Premier League and another five in the Europa League.

Solskjaer added: “We have done well over the course of the season, giving him more and more exposure, more and more game time, not easy being a young boy – he could still play in the FA Youth Cup team- so he’s a young boy we have to look after.

“But he’s performing off the bench or when he starts and he’s developed fantastically this season. The sky’s the limit, it’s up to him. He knows what he should do, can do and must do to continue playing, but that’s between us.”

Solskjaer remains concentrated on Saturday’s clash with Bournemouth at Old Trafford and didn’t rule out any potential changes to his team. 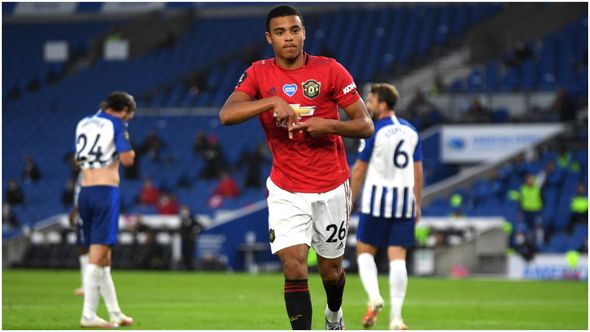 The Norweigan boss said: “I’ve got to wait and see. A couple have got some knocks and bruises.

“If there are a couple of changes don’t be surprised just because of fitness, but so many games. We’ve got to look after the players.

“It would be nice to play a team that played so well against Sheffield United and Brighton but let’s wait and see how everyone is after training. I’ve got many many reasons to play the same team but have reasons to rotate.”

United are aiming for a top-four finish in the Premier League and refuse to underestimate Bournemouth, who are facing a relegation scrap.

Solskjaer said: “I’ve seen lots of quotes we have an easy run in but next five games: Bournemouth we lost against them earlier in the season, Aston Villa we drew at Old Trafford, Southampton, we drew to them, lost to Palace, lost to West Ham – there are teams we’ve got a point to prove against and we have to improve on last performance.

“It’s not an easy game, what anyone else thinks doesn’t matter, we’ll have to perform. Bournemouth are fighting, where they are is not a nice place to be in but they are one of the best teams in the league on set pieces.

“We know we have to stop quite a few things with them. If we play to our best we should create chances and win the game.”

Related posts:
Previous Post: Mikel Arteta insists there is a place for Mesut Ozil at Arsenal
Next Post: Khabib Nurmagomedov’s father and trainer Abdulmanap dies at the age of 57