West Brom boss Slaven Bilic was shown a red card by referee Mike Dean at half-time during his side’s heavy defeat against Everton.

Bilic was left angered by the officiating surrounding Kieran Gibbs’ sending off following an off-the-ball incident with James Rodriguez, and remonstrated with Dean as the players left the field.

But despite his furious outburst, and walking on to the pitch to confront Dean at the break – which is against the rules of play – BT Sport pundits Joe Cole and Owen Hargreaves have defended him and believed he had every right to question the man in the middle over his decision-making. 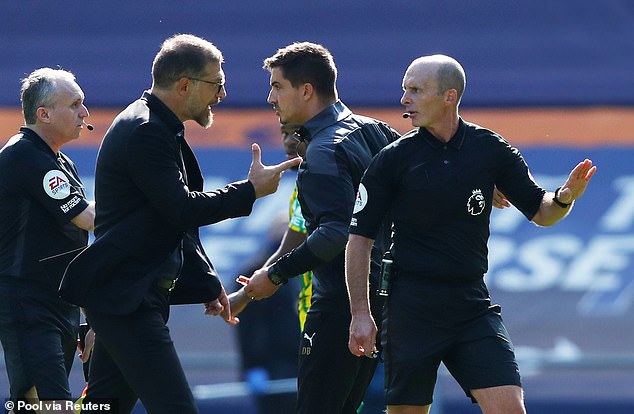 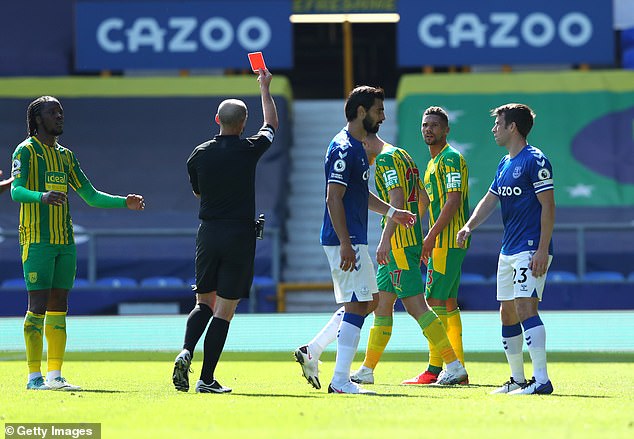 Mike Dean: Go away, you go away.

After the game, Cole even said: ‘As a referee you need to understand human beings. He should have said: “Look Slaven, I’m sorry, I can’t talk now you need to go away” and his whole demeanour would’ve changed. But instead he’s tried to give him the cold shoulder and shrug him off and walk away. I personally blame Mike Dean for that situation.’

The Premier League newcomers had given a superb account of themselves during the first half at Goodison Park, but found themselves losing 2-1 after James Rodriguez’s first goal in English football.

Gibbs soon allowed his frustrations to get the better of him, and was caught on camera pushing the Colombian playmaker in the face while the action continued around them.

His red card visibly angered Bilic on the touchline, and the 52-year-old headed straight over to Dean to openly air his disagreement with the punishment.

‘Check the foul, check the foul. And the red card,’ Bilic could be heard insisting on camera.

‘Go away, you go away,’ Dean replied, pointing at another irked member of Bilic’s coaching staff. 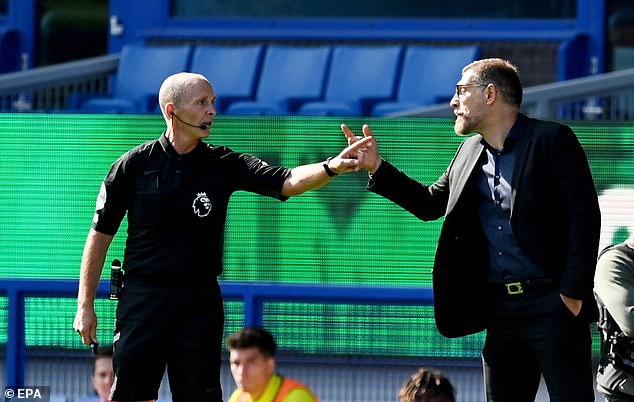 Bilic may face a touchline ban after the argument, and was restricted to watching on from the stands – while wearing a face mask – as Everton eased to a 5-2 win.

Hargreaves and Cole, however, have backed the tactician’s right to protest.

‘I think he has the right to ask the question,’ Hargreaves insisted on BT Sport. ‘He’s saying check the foul, check the red card.

‘He didn’t swear, he wasn’t rude. I think he just wanted to know. I’m not sure he deserved to be sent off.’ 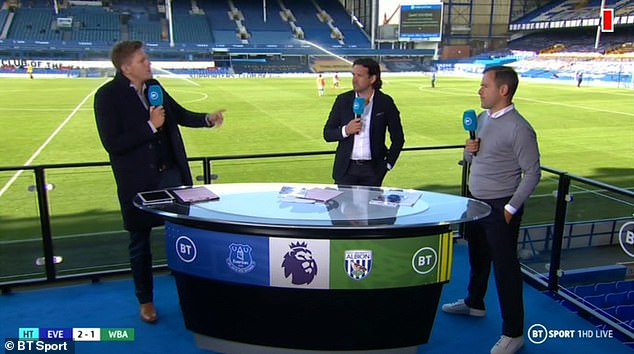 Cole added: ‘I think Mike lost his composure a little bit there but he’s well within his rights to do it. Passionate game, Slaven just coming up.

‘You can understand the frustration, he’s set his team up so well in that first half and in three incidents, it’s killed him.’

Dominic Calvert-Lewin plundered two more goals after the break to complete a stellar hat-trick, leaving West Brom winless after their first two fixtures back in the top flight.