Plans to restart Scottish football in regional hubs dotted around the country have been discussed by the SFA and SPFL Joint Response Group.

Five joint response sub groups have set to work on Scottish Project Restart. And, ahead of further discussions with the Scottish Government over public health concerns, the concept of restarting lower league games before smaller socially-distanced crowds at multiple football clubs in the communities of Dundee, Fife, Inverness and Aberdeenshire is under consideration.

SPFL Chairman Murdoch MacLennan said this week that the national game’must do everything humanly possible’ to resume ‘by the end of July’.

With the Scottish government adopting a more cautious response to relaxing restrictions on sporting events than Westminster counterparts, however, the joint response group are asking if there is a practical way to start lower league or Betfred Cup games before safely distanced crowds.

Insisting the hybrid plan is still at the idea stage, it would not be applied to the Premiership at first.

English football has seen club opposition to the idea of playing game at neutral venues.

With lower league clubs more dependent on gate receipts than television for their survival, however, the idea is seen as a way of getting fans back into grounds in some form and provide a template for all Scottish clubs to start playing football again.

English football has already set an ambitious target date of June 8 to end the current season and fulfil television contracts.

And while the Scottish season now looks likely to end with the Premiership being called based on current standings, the Joint Response Group want to fulfil the terms of a new Betfred Cup contract with Premier Sports due to start in mid-July and a £125m Sky Sports broadcasting deal scheduled for August 1.

Social distancing, health and safety and resourcing are the key issues being navigated by the sub-groups.

And a select band of nominated arenas utilising the same tested staff and stewards is seen as a safer and more cost effective way of maintaining safe social distancing than hosting fixtures at 20 or 30 different grounds every weekend.

The governing bodies have already warned Scottish Sports Minister Joe FitzPatrick of the ruinous impact blocking live games would have on the sport’s finances. 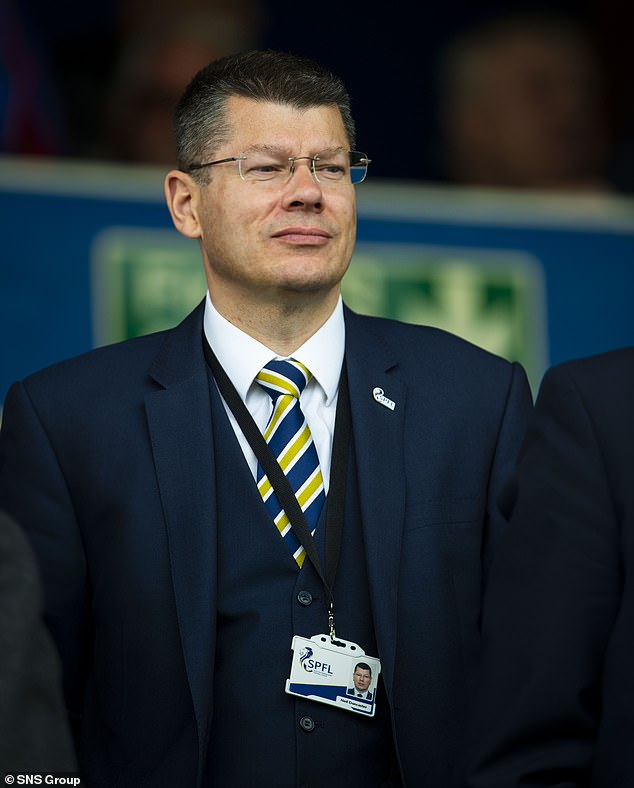 SPFL Chief Executive Neil Doncaster has warned of ‘grave peril’ for the nation’s football clubs if games have to be played without supporters.

And, with a Rangers resolution calling for an Independent Investigation into the climax to the season defeated, Doncaster and Ian Maxwell of the SFA plan more discussions with the devolved administration.

The SFA and SPFL sub groups have now met at least once to discuss and formulate plans and Rod Petrie, Scottish FA President and JRG Chair said: ‘I would like to thank the sub groups for the dutiful way in which they have embraced the challenges and responsibilities placed before them in finding a viable plan to restart Scottish football.

‘At this juncture I would also like to acknowledge the clear guidance and pragmatic approach from the Scottish Government which anchor our plans in reality, and are based on sound medical advice and expertise.

‘Naturally, we all wish to see football return as quickly as possible but we must continue to adhere to the guidance of the Chief Medical Officer whilst using the power of football to convey messages that will keep people safe and at home.’