Steve Clarke praised Scotland for bouncing back with a 4-1 win over nine-man Armenia but admitted World Cup elimination had rendered their four match international camp a failure.

The national team boss was under pressure after a dismal 3-0 defeat to Ireland on Saturday, hot on the heels of the deserved 3-1 Qatar 2022 play-off semi final loss to Ukraine at Hampden.

But after Armenia capitalised on poor Scotland defending to race into a sixth minute lead courtesy of Vahan Bichakhchyan, two goals from Stuart Armstrong had the visitors in the lead either side of a red card for Arman Hovhannisyan.

Further second half strikes from John McGinn and Che Adams secured a comfortable victory in this must-win match before Kano Hovhannisyan also saw red for the ill-tempered hosts.

Clarke was delighted to have Scotland’s fate in Nations League Group B1 still in their own hands after home and away victories over Armenia but admitted it could not make up for the Ukraine disappointment.

The Scotland boss said: ‘Two wins against Armenia are not going to make this international camp a good camp, because it wasn’t.

‘We failed on our primary objective — to get to the World Cup. 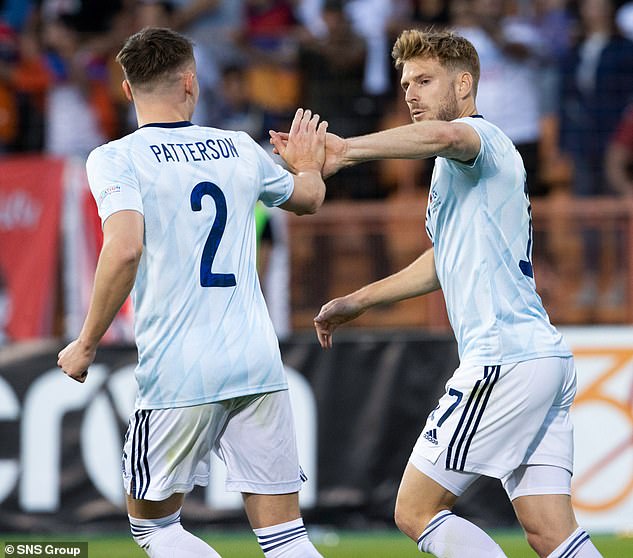 ‘We failed on that and we had a really bad performance in Dublin, which put us on the back foot again.

‘It’s nice to bounce back but there is work to do.

‘It was a game we wanted to win — and a game we probably had to win — although not necessarily mathematically.

‘It gives us the chance to go into the remaining Nations League games in September with a realistic chance of topping the group. That’s what we wanted.’

Scotland started slowly against an Armenian onslaught and Clarke cited fatigue amongst his players at the end of a long season. 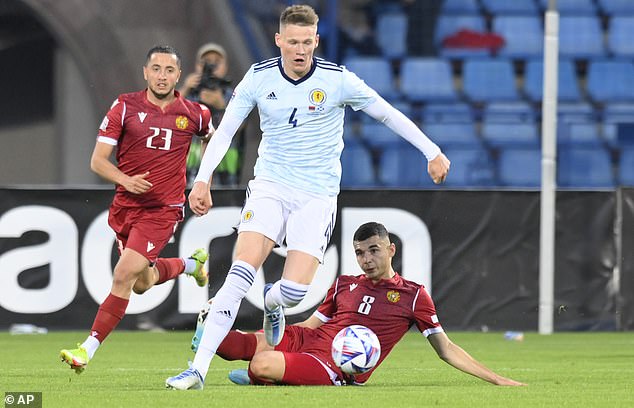 He said: ‘There was a reaction to the long journey and the flight. There’s a lot of fatigue in the players’ legs that we haven’t really spoken about too much, because we don’t want to be seen to be making excuses.

‘But it was there and Armenia got in behind us. But the players showed great character to come back.

‘It was a difficult schedule for the players but we haven’t made excuses until now. There’s no excuses for the two games that we lost.’

Clarke confirmed that captain Andy Robertson, and defenders Scott McKenna and John Souttar were not close to making the game.

‘Nowhere near. They didn’t even travel,’ he said.

But he played down the angry scenes at full time as players became involved in a shoving match and water bottles were thrown by Armenian fans after Hovhannisyan‘s nasty red card tackle on Lewis Ferguson. 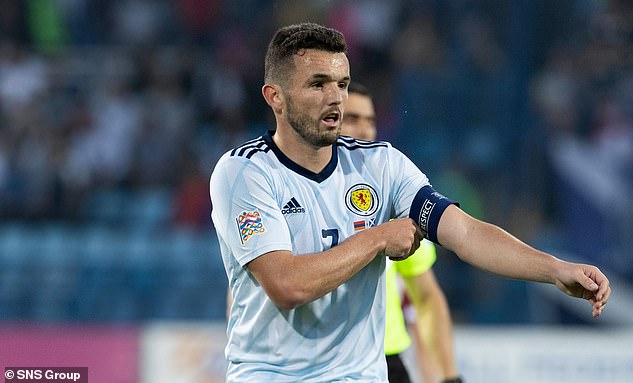 ‘I don’t think there was too much,’ said Clarke.

‘To be fair to their coaching staff, they were on the pitch pretty quickly and made sure everyone was calm.

‘Listen, there were some hard tackles towards the end of the game and professional players are always going to react to them.

‘But it was nothing.

‘I was more concerned about the bottles being thrown on the pitch after the tackle on Lewis. I saw one bouncing on the middle of the pitch. It was a hell of a throw!

‘I thought we already had control of the game when it was 1-1.

‘Those (hard) challenges and tackles come as a result of us dominating possession and having control of the game. 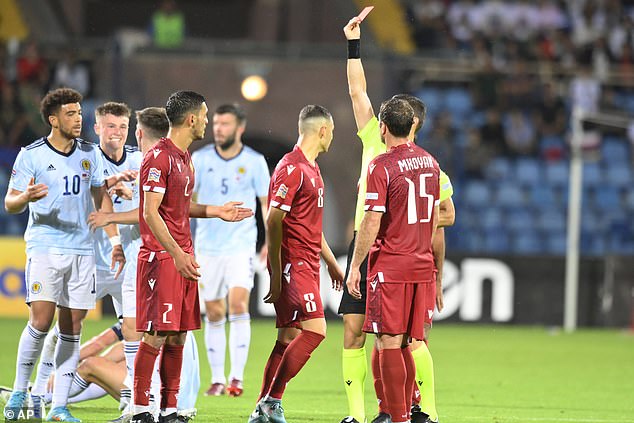 ‘I am glad the fans saw a good performance tonight.

‘The realistic fans know what we are doing and what we are trying to do. The rest of it? That’s out of our control.’

Meanwhile, two-goal hero Armstrong hopes Ukraine see a different Scotland when they face each other in a Nations League double header in September either side of a home fixture against Ireland.

He said: ‘It’s always nice to score goals for your country. The three points were massive.

‘The ambition was to go to the World Cup and we didn’t manage to do that.

‘Criticism is part of the game and when you don’t perform it’s always going to be there.

‘But we will have the opportunity to play Ukraine again — and the next time it will be different.’