Of all the directions we thought Wayne Rooney’s career may take after the end of his playing days, we perhaps didn’t expect this.

The eloquent and passionate spokesperson for a community worrying about its football club. A father figure for young footballers fearing for their livelihoods.

But this is Rooney in January 2022. As manager of Derby, Rooney carries responsibilities far heavier than anything he experienced during his years as centre forward and captain for Manchester United and England. 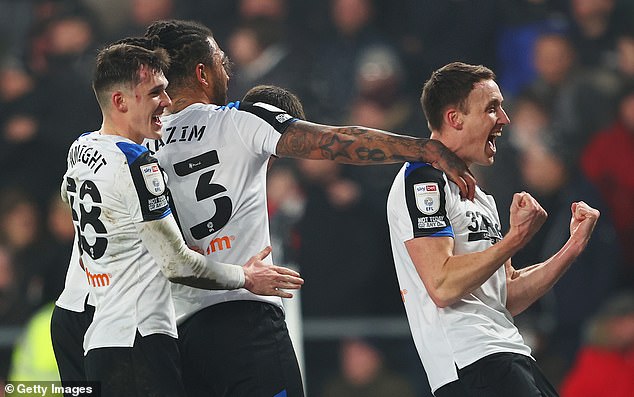 Already in administration with debts of £60 million, the club are forecast to finally run out of money by the end of the month.

While they do continue to stumble forwards, Derby labour in the Championship under the weight of a 21-point deduction.

It is a chaotic, desperate scene and in the middle of it all stands Rooney, a rookie manager who is still only 36. Yesterday, speaking on a 35-minute Zoom call from Derby’s training ground at which he has been known to sleep at night, he was a voice of calm reason, a voice with a clear understanding of what is at stake.

‘Derby is more than a football club,’ Rooney said.

‘It gives everybody in this city hope. It gives kids the right to dream. It gives young players opportunities. It’s incredible that it’s been left in this situation.

‘It needs to remain in the football pyramid. If not there will be a lot of hearts broken.’

Footballers are not always empathetic by nature. The world they know and come from is competitive, cruel and often unfair. It pays to be selfish. Rooney thrived at the top end of it on the back of rare talent and an insular streak. Now, as he prepares to lead his team in an East Midlands derby game at Nottingham Forest today, he is relying on something softer and deeper.

He has already spoken to parents of his players about their mental health, asking them to look out for red flags. Local supporter groups, he revealed on Friday, have his phone number.

Rooney has paid for vital training ground equipment himself and has promised football staff made redundant over the last 12 months that, if brighter days do return, they will be the first ones back through the door.

In short, Rooney has vowed to carry the load of Derby’s troubles on his own shoulders and on the field at least there has been a revival.

Four wins from the last five Championship games have lifted them from the foot of the division for the first time. On the wall in the home dressing room at Pride Park are pinned two league tables. The real one but also one showing how the Championship would look if Derby could have those 21 points back. 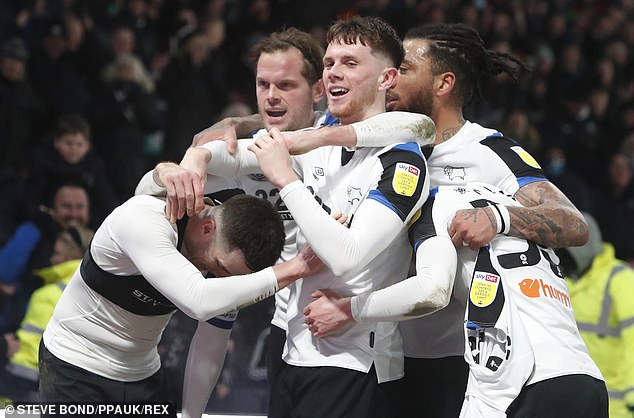 So, there has been some brightness but trying to find a way through the gloom of impending extinction continues to represent the greatest challenge of Rooney’s career.

‘Yeh, I think it is,’ he said. ‘It’s been incredibly tough at times. It’s been emotional. I have seen staff lose jobs. I felt the right way to go about this was to try and burden myself and take pressure off staff and players.

‘I know they look to me for guidance and I try. The results and the efforts of the players and staff have been incredible. The players believe in me and I am more than capable of dealing with the stuff off the pitch. I am really good at switching off.

‘I have four children which helps. When we have a day off I go walking with my wife and enjoy time with the family.

‘For my own sanity, I need to allow myself that time.’

Rooney has lived and breathed Derby’s troubles since taking the job in November 2020.

They were bottom of the Championship even then and survived only on the final day of the season. They have been in administration since September.

During all of this, Rooney has somehow managed to field a functioning football team.

He has handed 20 academy players first-team debuts. One 17-year-old was asked to run the line at an Under 14 game when the club were short of cash to pay match officials. The black holdall in Rooney’s office, meanwhile, is legacy of his nights sleeping there while trying to bring players in last summer. 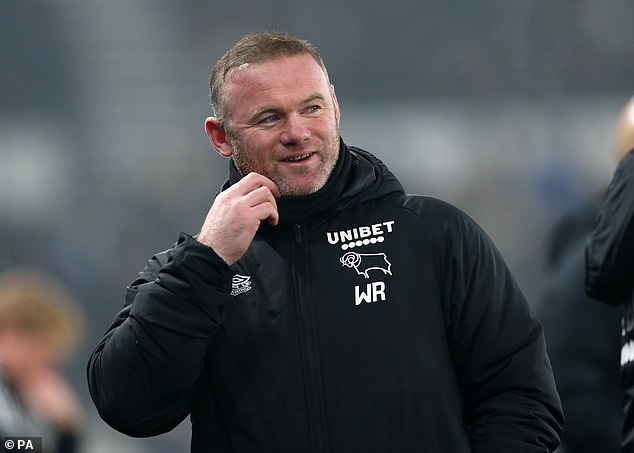 Asked on Friday if there was any chance of signings this time, Rooney just laughed. ‘It would be nice to actually execute some of my plans,’ he said.

Instead Rooney arrived at his media conference fresh from a chat with the club’s administrators during which he had sanctioned the sale of teenage left back Dylan Williams to Chelsea while insisting no one else is sold without his direct agreement.

And then, of course, there is the matter of Rooney’s boyhood club Everton, themselves without a manager after the sacking of Rafael Benitez.

Rooney is on the list of preferred interviewees at Goodison Park and did his best to duck the inevitable questions about that on this occasion.

‘I am flattered but for them to have a conversation with me they will have to go through the administrators,’ said Rooney.

‘There has been no approach and I am focused on Derby.

‘I have spoken to the administrators. They seem to be confident they will get something done. Next week hopefully. But things need to happen quickly to make sure this club can carry on.’

Derby’s desperate plight is encapsulated by the details of the Williams transfer. Forbidden by the financial restrictions currently imposed on the club by the EFL from placing the 18-year-old on a professional contract, the defender will leave for Chelsea for a fee that will do next to nothing to ease Derby’s troubles.

Derby, we should remind ourselves, were English champions in 1972 and 1975. Under Brian Clough they reached the semi-finals of the European Cup. Of all clubs to have slid down the treacherous slope towards oblivion in recent years, they are perhaps the biggest.

Rooney will emerge with metaphorical credit in the bank whatever happens but for now sees a bigger picture. He sees a proud club on their knees, a city holding its breath.

As for his anger, that is reserved for the club’s former owner Mel Morris, the man who gambled everything on reaching the Premier League and lost.

‘He is why we are in this situation,’ said Rooney. ‘I am sure the fans would agree. He did not speak to me when he was at the club.

‘I don’t like to waste my breath on that anyway. He has moved on and left us in a very difficult situation. I am sure he is enjoying his life at home.

‘If we can get the right people in then this club can be great again. But right now survival is the most important thing.’